Integrated audio built into motherboards and video cards has eliminated the need for dedicated sound cards in most desktop computers, but this has forced Creative’s Sound BlasterX team to build products that serve specific purposes. We’re talking about devices such as the $150 Sound BlasterX AE-5, which is available for purchase now. It is a PCIe internal sound card with its own DAC (digital-to-analog converter) and Creative’s new discrete headphone amplifier that powers the left and right channels individually.

For gamers, or consumers of any kind of media, the AE-5 will help you get the most out of your headphones — especially if they are high-quality and expensive.

The amp makes all kinds of headphones sound amazing

The standout feature of the AE-5 is the amplifier. Creative built this device for people using headphones who want more power than a motherboard can do on its own, and the results blew me away.

The amp, which Creative calls an Xamp, sends a separate powered signal to the left and right ears. The end product of that is a rich sound where the bass, mids, and highs all have a crystal, clear lifelike quality to them.

What’s awesome about this is that Creative has tuned the sound card to provide better audio to just about any pair of headphones. The cheap pair you bought online to work with you phone will sound way better when plugged into your AE-5. The difference is immediately apparent. You don’t even really have to do a side-by-side test. Your games will sound more dynamic, your movies will come across as more cinematic, and your music will pop with far more energy than you get without an amp. 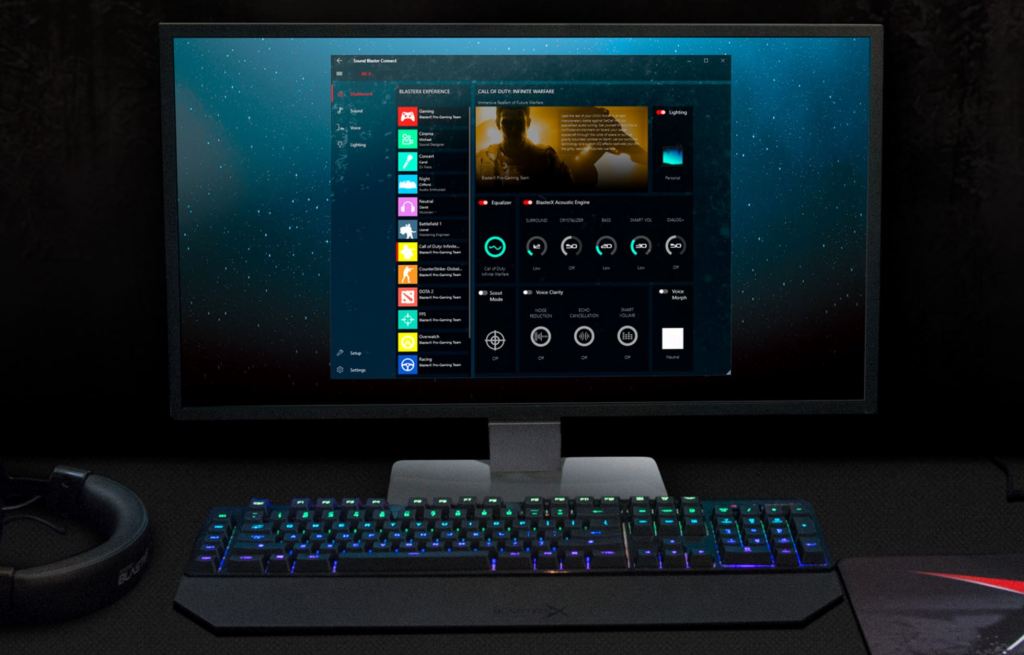 Above: Sound BlasterX’s software for controlling the AE-5 as well as its other products.

The AE-5 has support for 5.1 surround sound and 7.1 virtual surround, and you can get into all those options in the Sound BlasterX software. That’s where you can also play around with your equalizer settings or even turn on Creative’s Aurora RGB LED lighting. The AE-5 comes with a strip of LEDs that you can set to any color or dance of light that you want.

My favorite extra feature is the Scout 2.0. This feature has two parts. It is a button you can activate with a hotkey or by pressing a button in Scout app to have better hearing of distant enemies. It works really well in certain multiplayer shooters where you are trying to hear the footsteps or direction of fighting so you know where an attack could come from. It is also a radar that you turn on through the app that shows you where the sound is coming from. This has been helpful in games where I’m getting shot, and I can look to see where the firing is coming from.

And because the Scout Radar is on your phone, you can livestream without anybody having to see that you are … getting some extra help.

The only real negative of the AE-5 is that while it’ll help you get the most of the headphones you already have, you won’t get the most out of the AE-5. Its amp is powerful enough that you would want a high-impedance audio device from 80 ohms to 600 ohms. Those are the kinds of headphones that really only work well with an amplifier, and their quality is often way better because of it. The AE-5 is ideal for something like that, and you may end up feeling compelled to get a pair after you hear the improvement compared to using the a motherboard sound card alone.

You don’t need a sound card, but I think you should want this one. The AE-5 has delivered the best sound audio I’ve ever heard through headphones on my PC. If you want to play games with theater-like sound, I highly recommend adding this to your rig.

Creative provided GamesBeat with a sample unit for the purposes of this review. It is available now for $150.