King has cut a deal with Sony to cross-promote Candy Crush Saga and The Emoji Movie.

Sony’s The Emoji Movie debuts on July 28 in the U.S., and it features cute characters who are like the smiley faces and other animated creatures that we send to each other in smartphone or computer messages. The Tony Leondis film includes a scene from King’s Candy Crush Saga mobile game.

And Candy Crush Saga — which has been played a trillion times since 2012 — will include new levels from The Emoji Movie, bringing the characters from the movie to life in the game.

These movie-inspired in-game challenges have been designed to reflect Candy Crush Saga’s appearance in the film, where Gene, the movie’s main character, gets stuck in the game board and needs to be swiped to freedom. 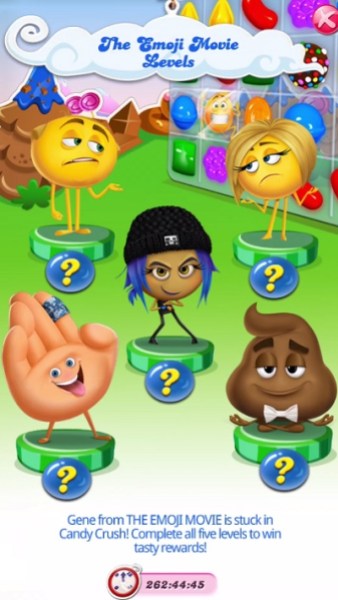 Above: The Emoji Movie characters will appear in Candy Crush Saga.

Candy Crush Saga players will need to swipe and match their way through five levels, helping Gene escape to the bottom of the game board. A selection of sweet rewards will be up for grabs for players who succeed in setting Gene free.

“It’s hugely exciting that Candy Crush Saga is making its film debut in The Emoji Movie this summer, and what’s more, we’ve been able to bring the fun and action of the big screen to mobiles by launching a series of levels in the game that have been inspired by the film,” said Sebastian Knutsson, chief creative officer at King, in a statement. “This is a unique integration for us – we’ve adapted the Candy Crush Saga game board for the first time, incorporating characters from The Emoji Movie and creating a gaming experience that mirrors that seen in cinemas, as players take on a series of challenges to free Gene from the Candy Kingdom.”

Available to players on iOS, Google Android, Windows and Amazon, these live in-game events, inspired by The Emoji Movie, will be running in Candy Crush Saga over two weeks for a period of 48 hours — on July 27, July 28, August 3, and August 4 — to coincide with the worldwide release of The Emoji Movie. Activision Blizzard’s King had 342 million monthly active users in the first quarter of 2017.