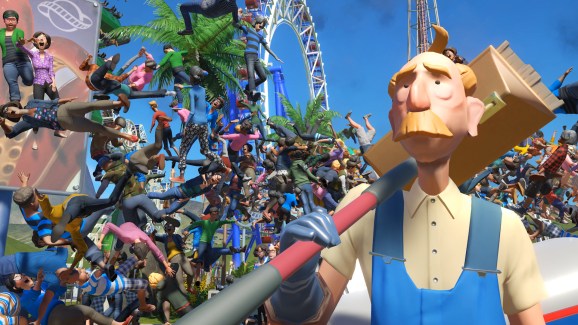 Frontier Developments has found success thanks to its modern hits, Planet Coaster and Elite: Dangerous. Now, the studio is going to hold its own expo celebrating those two games. It’ll also announce a new project at this event.

Frontier Expo 2017 will take place on October 7 at the Queen Elizabeth Olympic Park in London. The event will have news on Planet Coaster and Elite: Dangerous on top of the new game reveal. It’ll also have exclusive merchandise on sale and guest speakers. We’ve seen other studios, notably Blizzard with its BlizzCon or Mojang with MineCon for Minecraft, hold similar events for its games.

Planet Coaster has become the top theme park simulator for PC since releasing last year, beating out the long-standing RollerCoaster Tycoon franchise. It has a flourishing community that creates and shares user-generated content, including rides, shops, and entire parks. The space sim Elite: Dangerous came out in 2014 for PC, with console versions following. Elite: Dangerous has been generating buzz as aliens begin to appear in the game for the first.

While both games have found success as digital releases, Frontier Developments is also planning boxed versions of both games.

“Frontier Expo is all about Frontier’s incredible community,” Frontier chief executive officer David Braben said in a press release sent to GamesBeat. “Our journey into the world of self-publishing wouldn’t have been possible without the terrific communities that have assembled around Elite: Dangerous and Planet Coaster. We’ve held community events before but we’ve never had the opportunity to celebrate our current games with the players and look to the studio’s future all at one event. We can’t wait to meet everyone this October.”