PlayerUnknown’s Battlegrounds fans are upset, and they are letting the world know it on forums like Reddit and Steam. Yesterday, Bluehole announced that microtransactions are coming to the last-player-standing shooter that’s become a PC gaming phenomenon. This enraged many people because Battlegrounds is still in Early Access and is a premium-priced game. With the development studio’s game finding a massive audience on Steam, it was only a matter of time before it wound up doing something controversial, and it looks like that time is here.

The first microtransactions in Battlegrounds involve a new crate that players earn through playing the game in the weeks leading up to the Gamescom fan event in Germany, which starts August 24. Bluehole is planning an invitational tournament for Battlegrounds at Gamescom, and it plans to fund the prize pool for that competition by selling keys for $2.50 a piece to unlock the Gamescom Invitational Crates. These will feature limited-time exclusive cosmetic items that players can put on their characters or sell on the Steam marketplace. Bluehole plans to donate any leftovers to charity. After the tournament’s finals on August 27, all cosmetic crates in Battlegrounds will once again open for free.

For Bluehole, this effort to raise money for a prize pool and charity is likely a test of its in-game microtransaction system. Brendan “PlayerUnknown” Greene told Gamasutra that he thinks “the skin economy is a good thing.” But he also said that he would wait until the game is out of Early Access.

“As far as monetization is concerned, know that we eventually intend to give the player options to purchase cosmetic items only,” Greene wrote in a blog post regarding Battlegrounds 2017 development road map. “However, until the game is out of Early Access, our development resources will be focused entirely on improving the Battle Royale game mode. Only then will we consider the addition of in-game purchases.”

But beyond going back on a previous statement, Bluehole and Greene likely aren’t doing a lot wrong here. Players may hate the idea that they paid for a game and now it’s asking them if they want to spend more money before it is “finished,” but that word doesn’t mean a whole lot when it comes to game development these days.

“The fact that it is in early access has no real meaning,” Newzoo chief executive and analyst Peter Warman explained to GamesBeat. “Soft launch to commercial launch is a seamless process nowadays.”

Warman went on to say that it is an expected part of development to experiment with something like microtransaction sales as early as possible.

“Testing a business model in this phase with millions of players is nothing more than normal,” he said. “As long as it does not influence the chance to win, it actually provides a way for fans of the game — and they already have a lot — to express their enthusiasm in money voluntarily. Imagine the Miami Dolphins not selling jerseys for a year. Fans would go crazy.”

He also points out that more developers are letting fans determine the excitement for the esports competitions by using them to fund the prizes through in-game purchases. Of course, you might not care about Battlegrounds competitions at all, and you may still end up funding them because you want to dress up your dude in a schoolgirl outfit. 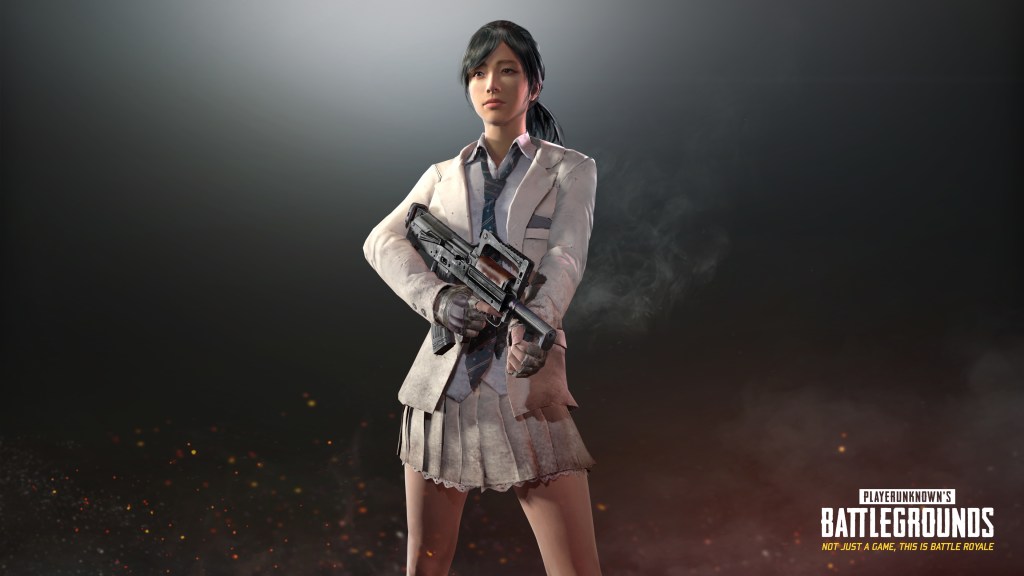 Above: This was just like middle school for me.

What a lot of this comes down to is many gamers want to pay one price to own everything in a game. And that is rubbing up against the economic realities of making and selling games in 2017. Game prices have stagnated at $60 since 2006. In that time, development has grown more expensive, with more time required to render high-definition photorealistic assets. The dollar and other currencies have also lost up to 20 percent of their value.

So, effectively, gamers are getting a price cut when they go to buy a game at $60. To make up for lost revenues and to pay for the more expensive development, publishers and developers have turned to alternative business models. That includes $100 special editions and season passes. More recently, however, game companies have turned to microtransactions and loot crates for this extra revenue.

At GamesBeat, we labeled 2016 “the year of lootboxes.” It’s a business model that works by letting people with money spend as much as they want without excluding people who can’t or won’t pay from any critical gameplay content. And you can expect this trend to stick around. Hell, Warman suggests you would potentially have less fun without it.

“If spending is voluntary and does not influence the game, it is a good thing for fans not a bad thing,” he said. “A hobby on which you are not allowed or able to spend money is not as much fun or exciting.”