The viking-on-knight-on-samurai brawler For Honor is getting new characters, maps, and dedicated servers. Ubisoft announced its plans through February 2018 this morning on its weekly Warrior’s Den livestream.

Dedicated servers are a welcome announcement, as fans have previously complained about server issues. Ubisoft is hoping to solve for peer-to-peer stability and improve matchmaking, though it hasn’t yet announced an official date for when the dedicated servers will be available.

Season 3 will start next month, introducing two new heroes, two new maps, and a beta version of Duel Tournament ranked combat. Duel Tournament was available as a limited-time public beta earlier this year for PC players, and it features a bracketed tournament where players compete in qualifiers before working their way up to the finals.

4-on-4 multiplayer combat will launch with Season 4 in November, along with two more heroes and two new maps. A new Training Mode will also be available as unranked combat practice.

In the next few months, Ubisoft will also be rolling out more equipment upgrades (such as “legendary” weapons and armor) and testing other updates via public betas for PC players, similar to how it tested Duel Tournament. For the full roadmap, see the image below. 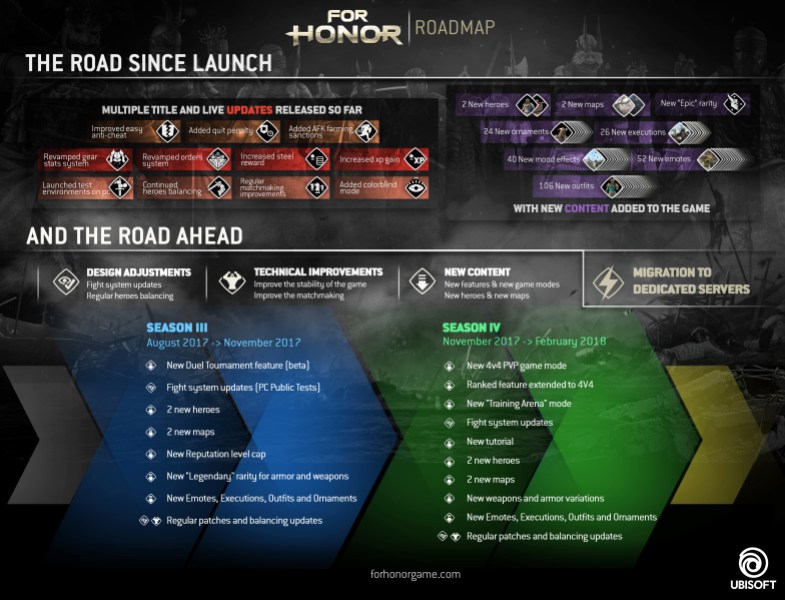