Bethesda’s Wolfenstein II: The New Colossus is going to be an awesome video game when it debuts on October 27. But it’s going to produce a lot of agony once players start trying to shoot the Nazis who have taken over America. That’s because the game is, like its predecessor Wolfenstein: The New Order from 2014, going to be difficult to play.

Yes, this is another episode of Dean Takahashi is bad at playing video games. But I hope it entertains and illuminates. I played the beginning level of Wolfenstein II at the recent Electronic Entertainment Expo (E3) in Los Angeles in June. It was tough, but I didn’t get have so much level that I couldn’t finish the level. But I played the game again at another couple of preview events, and that feeling of victory that comes when you finish a level eluded me.

The first time I played the Roswell level, I couldn’t finish and it wasn’t my fault. The build was a bit buggy, and I had to come back to do capture another time. I had played it almost to the end of the level. When I came back the second time, I figured I would get through it no problem. I would capture my video, and be on my way. I was wrong. Under time pressure, playing on a normal setting, I couldn’t finish the level. In fact, I couldn’t even get past the very first firefight. You’ll see that in video of my session. And then I’ll show you the video of how you’re supposed to play it and succeed. (See our interview with the creative director here and Bethesda’s Season Pass plan here). 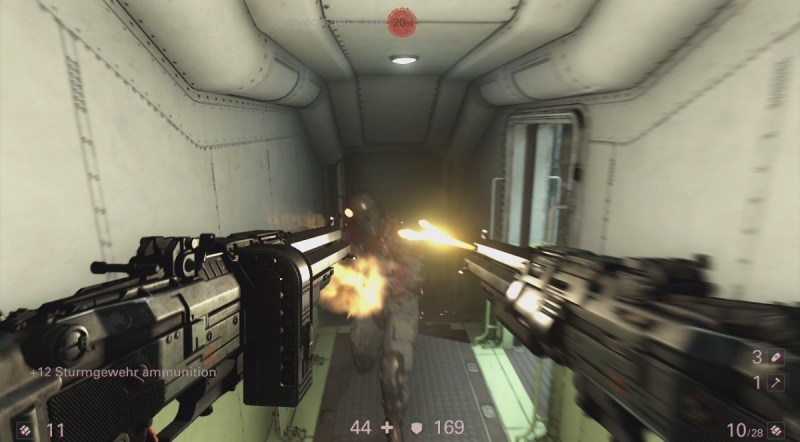 Above: Dual wielding is the way to go in Wolfenstein II: The New Colossus. It is what I needed.

But first, let’s back up and talk about the story. The Wolfenstein video game story is quite disturbing, built on a fictional alternative history, where the Nazis won World War II. By 1961, they have crushed all opposition and corrupted American culture with “Nazification.” In 2014’s Wolfenstein: The New Order, the American hero BJ Blazkowicz awakens from a coma and helps lead the opposition to the Nazis by gunning them down at every turn. The first-person shooter was one of the finest of the year.

Now the developer, Uppsala, Sweden-based Machine Games, is back with a sequel, Wolfenstein II: The New Colossus, which actually takes place in a pacified America. At the close of 2014’s The New Order, Blazkowicz is victorious, but he is also gravely wounded. The sequel begins some months later, as Blazkowicz is still recovering from his wounds. He awakes in a hospital ward in a warship, and finds that he has to escape from Frau Irene Engel, a former SS commander and now a lieutenant general. She has been scouring the region for him, and one of Blazkowicz’s protectors warns him, “Today, she found you.” But thanks to the friends, Blazcowicz hasn’t been captured just yet, and he attempts to escape the ship crawling with SS soldiers. That was the level I played at E3.

The new preview takes place later in the game, in Roswell, New Mexico, where the Nazis have set up a secret research facility to delve into the secrets of the American UFO incident in Roswell. Blazkowicz is sent to blow up the Nazi underground facility with a nuke. He is almost discovered by a Nazi Kommandant in a very creepy cinematic scene that shows how much America has changed under Nazi rule. You can see that here in the cinematic video.

I proceeded to get started with the level, infiltrating the Nazi underground train.  I had troubles getting past the early guards, starting out with a silenced pistol and a knife. I found a stealthy path, but I neglected to pay much attention to the cool weaponry I could have crafted. I also didn’t wield two weapons at once, which would have solved all of my problems, as you’ll see in the video from Bethesda at the bottom.

Anyway, I proceeded to move around the train area in a stealthy way. I moved up the stairs to the control room, and then I died as I took out the Kommandant and prevented him from calling reinforcements. But there was another one further away who could also call in help. I switched on the control for the train, and then I was immediately assaulted by two very fast ghost-like Nazis, dubbed Ubersoldiers. They move very fast sideways.

“They can move really rapidly on the ground in any direction, but they can also jump and attach to walls. They have that chest cannon they can fire when they’re on the wall. They don’t take so much damage, though. They’re easy enough to kill if you can hit them, but they’re hard to hit,” said Jens Matthies, creative director of Wolfenstein II: The New Colossus, in an interview with GamesBeat.

Above: The dogs are deadly in Wolfenstein II

But as soon as I took them out, I got killed. Then I respawned at that point, over and over. I couldn’t beat the Nazis who swarmed the control room. If I had had the right combination of grenade launcher and machine gun, dual wielded, I could have suceeded. But I just had my machine gun, and all of the Nazis were heavily armored. When a few of them came at me at the same time, they took me down.

Matthies said that the team evaluated difficulty level in the sequel, but they wound up making the game more difficult, adding new insane levels on the high end of difficulty. If he had dropped some more grenades and ammo in the spot where I had trouble, I wouldn’t have complained.

Check out the video below to see my problem.

And look at the video from Bethesda to give you an idea of what you’re supposed to do. I had a lot of fun with it, but you’ll see just how embarrassing my game session was, as I was trying to speed along and get out of that preview session on a crazy timetable. The solution was to dual wield and take out the Kommandants as early as possible.