Razer is bringing its wireless Thresher into the high-end gaming-headset fight. The Thresher Ultimate PlayStation 4 and Xbox One models launch worldwide for $250 each. That puts the headset line up against competitors like the $200 Logitech G933 or the $300 Astro A50. As the pricing would suggest, the Thresher squeezes between those rivals in terms of features. It has 7.1 virtual surround sound, 50mm drivers, and a long-lasting battery.

After using it for a couple of weeks, I’ve found that the Thresher has a lot to like. But it also has some frustrating quirks that may drive you nuts.

I have always liked Razer’s core design tendencies when it comes to headsets. Like usual, you’ll find a black frame with over-sized ear cups and splashes of green. The headset also doesn’t overly rely on plastics, which is nice to see in a $250 product. It has a dual metal band that crosses over the top and connects to the ear cups, which are a combination of metal, plastic, and faux leather. As usual, I think the whole thing looks professional, and you can also get it with blue accents if you go with the PS4 version.

But the design isn’t just about looks, the Thresher is also quite comfy. The soft foam in the cups enables you to wear glasses without irritation. It also enables the headset to hold your head firmly without squeezing too painfully. I also still love Razer’s retractable Microphone. Even headsets that let you put the mic up in the air still feel too big and bulky to me. Razer’s mic hides away inside the left ear cup, and that shrinks the Thresher’s profile and clears up the space around your head.

The Thresher also delivers full-bodied sound that is great for a variety of media. It doesn’t have any lag due to its 2.4 GHz wireless connection. That enables you to enjoy the 7.1 Dolby in games and films without the sensation that you’re out of sync with the visuals.

That audio itself is also excellent. Because it is wireless and battery powered, it features a bit more of an oomph than you would get from just plugging a headset into your controller. That, along with the Thresher’s frequency range, means you’ll get nice booming footsteps and explosions along with crackle-free gunshots and other loud noises.

The surround sound also works. On Xbox One, it comes through especially clear when you pair it with either the Windows Sonic or Dolby Atmos spatial-sound options in the settings since it plugs into the optical port on your console. This is great for getting positional audio cues in online multiplayer games. I found that it worked to give me an idea of where to look in Rocket League or Titanfall 2. Even when you’re not trying to use the surround to get a competitive advantage, it will envelop you in immersive audio in single-player campaigns and movies.

The Thresher gave me a lot of issues. I have my consoles set up near my router because I want to connect them to the internet with an ethernet cable, but I think the wireless signals were competing for frequency real estate because I was getting a lot of drops in the audio feed. I was sitting only 10 feet away with direct line of sight to the base station, and I was still having trouble getting a stable connection. I fixed this by moving the Thresher upstairs away from the router where it worked flawlessly.

You may not have the same problems. My router was within 3 feet of the Thresher base. Maybe a few extra feet could have helped, but there was no easy way to test that with my setup. And when I did move it upstairs, I was able to get a flawless connection with me walking at least 30 feet away with walls between the headset and its radio. 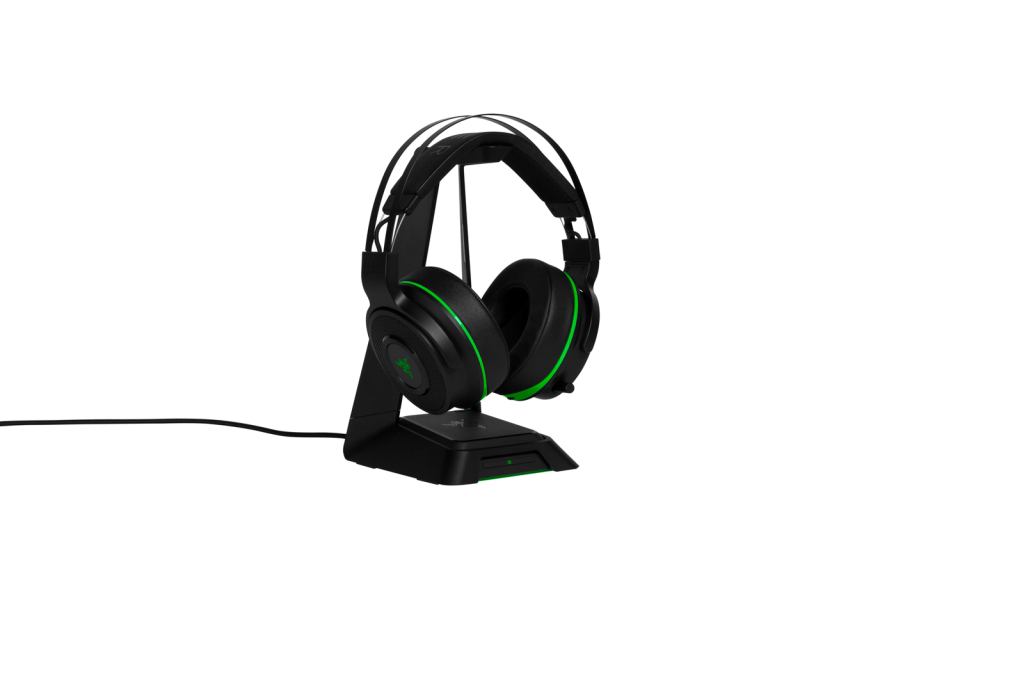 Above: Razer Thresher with its stand and base unit.

The Thresher comes with its own stand that sits on top of the base station. This is great for hanging it up when you’re done, but that’s all it’s good for. Unlike the Astro A50, simply plopping the Thresher onto its holster isn’t enough to start charging. Instead, you have to plug in a standard micro-USB cable and then hook it onto the base.

For me, that means sometimes I’m just going to forget to charge the Thresher, which will lead to situations where it dies quickly into a gaming session.

Has to be on for pass-through audio to work

The Thresher’s base station has a power button, and it has to be on not only for the headset to work but also for the audio to pass through to your sound system or television. This led to several instances where I couldn’t figure out why sound wasn’t working when I was trying to watch a show with my wife. I guess I would eventually get used to that, except the base station doesn’t always turn on when you power up your console. So, you might sit down, pick up the controller, turn on the system, and then have to get back up just to turn on the base, so you can hear your speakers.

This is totally frustrating, and I wish it was just always on as long as the console was on.

I like the Razer Thresher when everything is on and working. It is comfy, and it sounds wonderful. Everything outside of that core experience is the problem. The base-station stand is a missed opportunity. The connection gave me a lot of troubles. And the weird power button is a real bummer of a user experience. If you’re looking in this price range for a wireless headset, not many sound better, but I would recommend you try to save up another $50 and go with the much friendlier Astro A50.

Razer provided GamesBeat with a sample unit for the purposes of this review. It is available in July for $250.