The University of Southern California has always had a stellar reputation as being one of the best game design schools in the nation, and today it is going through a big leadership change as Tracy Fullerton moves to a reduced role and former THQ executive Danny Bilson assumes more responsibilities.

Bilson will become the new chair of USC’s School of Cinematic Arts Interactive Media & Games Division (IMGD). And in that position, he’ll be in a spot to influence the next generation of professional game developers.

Bilson is a writer, film director, producer, and game executive who held senior executive roles at THQ and Electronic Arts. He has been on the faculty of the USC School of Cinematic Arts since 2005, where he has taught screenwriting, narrative design, and currently leads the Advanced Games Project.

“I’m extremely happy to see Danny taking on this role,” said Fullerton, in a statement. “It speaks to the depth of our organization that we have such a great team. I’m looking forward to focusing more on my own games as director of the Game Innovation Lab and working with Danny to continue to grow the program as a whole.”

Bilson will report to Elizabeth M. Daley, the Dean of the School of Cinematic Arts, and he will be part of the larger collaboration known as USC Games, which also includes the computer science department. Fullerton will remain the Electronic Arts Chair in Interactive Entertainment and Director of USC Games. Mike Zyda, founding director of the USC GamePipe Laboratory, is a professor of engineering practice in the computer science department and he will collaborate with Bilson and Fullerton in games education.

I interviewed Bilson about his new role and his views of the game industry and USC’s collaboration with game companies. Here’s an edited transcript of our conversation. 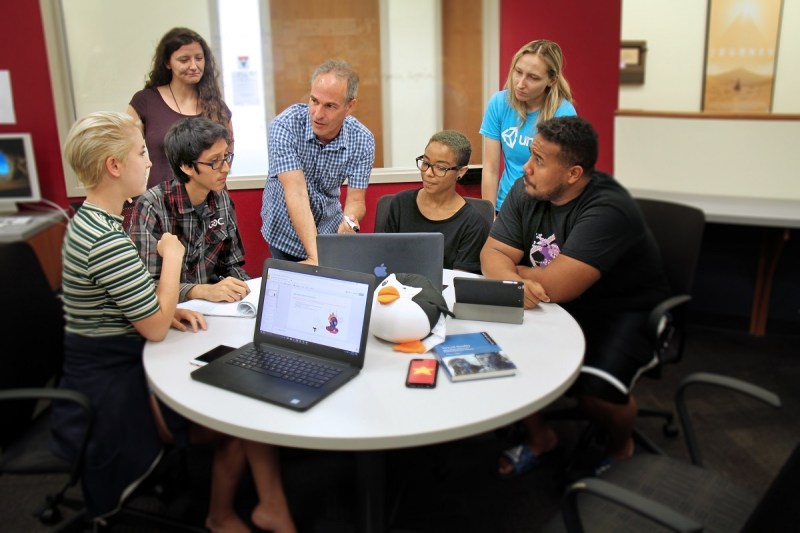 GamesBeat: So which part of the whole USC Games organization are you running?

Danny Bilson: The very fact that you have to ask about which part says something. I am going to be chair of USC’s School of Cinematic Arts Interactive Media & Games Division. Tracy Fullerton stepped down and they asked me to step up. I thought it over for a while. I like leadership, so I decided to see if I can take all this great stuff we have to the next level.

GamesBeat: Does Tracy still have some kind of role in oversight?

GamesBeat: Is there a hierarchy still in the USC games structure? Are you reporting to somebody? To what degree are you running things?

Bilson: I report to Elizabeth Daley, who’s the dean of the School of Cinematic Arts, the entire film school. The interactive media and games division is now under my leadership. Tracy is a part of that.

GamesBeat: And then there’s the computer science as well?

Bilson: Right. That’s really important. We’ve been working together, on and off, under the USC Games brand. Probably the most important issue for me is to continue to bring us together under that brand, so that people like yourself won’t have to ask, “Which side of the games school are you on?” There’s just one. When you talk about us, we’re all working together. If I have one vision, it’ll be that in a couple of years, nobody will ask that question. It’s all one group working under the USC Games banner.

Michael Zyda and I have had many really good meetings leading up to this transition. He’s going to be a great partner. We’re going to hang everything under the USC Games brand, and once we get all of our games under one label, we have an incredible amount of product to show. Or maybe “product” isn’t the right word anymore. But we’ll have a lot of games. We’re going to make an announcement later on about how we’ll reorganize the public-facing aspect of that. It’ll be really exciting.

I’ve been at the school almost 13 years. I was a part-timer for 12 and a half years, teaching narrative design for games, and then I took over advanced games. I became full time in January of this year, and now the chairman. But the whole time I’ve been there, the one thing I wanted to work on was the unification of the family. I feel great about where I’m headed. Those who are paying attention will see something interesting going on, aggregating all of our content into one brand. It’s pretty powerful. 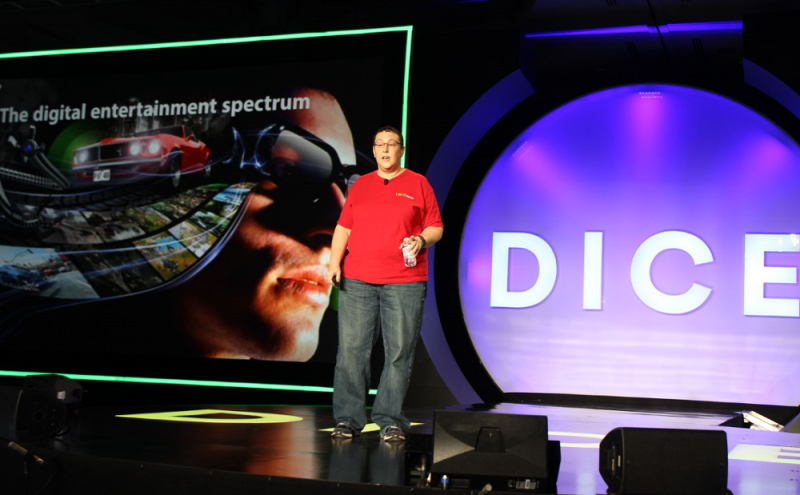 GamesBeat: How would you summarize some of the things the school is already known for? You’re ranked as the number one school. You have a lot of famous graduates, and some big projects showing up as near-complete games on your open house days.

Bilson: First of all, if I was to describe the place, I’d call it a culture of thoughtful innovation. We’re a research university. Even in games, testing new design ideas, testing the limits without commercial pressure. Part of the mission is to expand the universe of games and the way we look at games. At the same time, being part of the USC film school, our culture there for 50 years or more has been of professionalism, of relationships with industry, and mapping a lot of the way we teach to the way people make, in this case, games when they leave USC.

The one thing I tell my students all the time, especially in production, especially in advanced games, is that we’re going to run this the same way I ran studios in the commercial world. You’ll come across all of these different aspects and all of these different kinds of feedback – and pressure, obviously – but when you get outside and go beyond USC, nothing will be for the first time. You’ll have seen that before in school. “I remember that kind of feedback. I remember those prioritizations.” Certainly I teach that way.

We also, though, have a very diverse faculty. A lot of us are professionals, at least half, and that includes Mike and Richard Lemarchand and a lot of us who’ve shipped a lot of games. Then we have people who’ve come up through academia, who are really thoughtful about experimental games, about games for change. That’s a big thing for us. If I had to label it all under one thing, it’s quality games. It’s always been that. Are you making games that engage people, that people want to play? Whether we’re monetizing or not monetizing post-graduation, we still do games that have those qualities, that will draw people in and keep them playing.

That touches all aspects of game development, from science and engineering to the quality of design to even thinking about compulsion loops and things that keep people engaged. More recently, narrative and storytelling have become a big thing in games. Fortunately I’m privileged to be in a place where that’s my expertise. There’s more and more need for that. It’s fun to deliver on the idea of — I’ve always believed that our medium is just like books or movies or anything else. We should hold our storytelling to the same high standards as all other art forms. That’s an important part of USC overall.

As a matter of fact, Richard and I are running a training program this summer for 20 producers from Tencent. We’re teaching them for four weeks, with translation and everything. Their interests are less about western design techniques, but they’re really interested in storytelling, how we tell stories in games in the west. I find, every week, as I go into more teaching with them, that they’re asking for more about story.

That’s a reflection of how the industry has evolved. The narrative games are getting more — I don’t want to say serious, but more professional in terms of storytelling. We’ll reflect that at USC. That’s a lot of our skill set. It’s a lot of fun. At the same time, we’re a university. We have the ability to explore all kinds of avenues of innovation, without commercial pressure, in mechanics and hardware innovation, as well as narrative innovation. It’s a lot of fun to work with students who have all that passion for games that comes from the same place mine came from, from being a gamer and a user. They haven’t been exposed to all the pressures of monetization. They can just explore making great games.

The more diverse our games are — when I talk about diversity, I mean both sides. Hardcore commercial games to very thoughtful games with different kinds of play patterns. Being able to do all that without having to manage a P&L is pretty awesome for a guy like me. 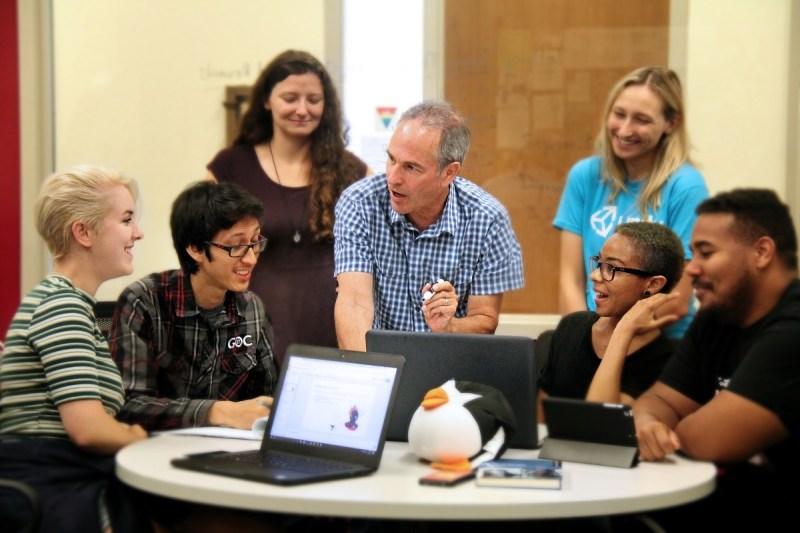 Above: Danny Bilson (in blue) has held jobs in both games and films.

GamesBeat: How has your own view of the commercial game industry evolved as you’ve moved into the academic world?

Bilson: Obviously I’m still a core gamer. I still play at least two hours a day. Primarily triple-A console, because that’s what I really love. That’s how I grew up in the game business. It’s my favorite stuff.

My view of the industry is very basic: the costs are so high in triple-A that creative risk is very difficult. It’s sad to see so few triple-A titles. I completely understand financials and how that works, or doesn’t work. But it’s sad to see that the industry can only hold so many, and there’s so much risk involved that we don’t see as much innovation as we sometimes wish.

For instance, E3 for me this year, as far as the content went — of course I’m still going to buy all the sequels and play the big stuff. But I’m always looking for something that’s going to grab my attention, that’s like, “I’ve never been there before.” That’s my favorite thing about the announcements. Take me someplace I’ve never been. When they do, I really get excited for a game. Whether it succeeds or fails, I’ll always buy it.

But this year in particular, I just — I was seeing a lot of fantastic products, but not anything that felt like I haven’t been there before. Maybe I missed something, because I didn’t see everything, but on the big triple-A stuff, when some of those guys have enough revenue — I can give an example. Rockstar. They’ve always had enough success to be innovative and take risks. One of their greatest risks ever was Red Dead Redemption. The beauty was it paid off. I can just imagine marketing people back then saying, “Kids don’t even know what a western is!” And they said, “Yeah, but they’re awesome and we love them and we want to make one.” They had the resources to do that. That kind of passion and innovation takes me to the next great place. I know there’s a lot of artists out there who will still be able to do that.

To answer your question, I’m always longing to be taken someplace new. I’m hoping there will be some room for more risk in more companies. But that’s not to say I don’t love what they’re making, because I do. I’ll be happy to go back to Call of Duty: WWII. At least we haven’t been there for a while in that space. I know they’ll do a great job with great tech. I don’t want it to seem like I’m saying that stuff isn’t awesome and I don’t want to buy it. I do. I’m just always looking for — with the great minds and the great technology in our industry, take us someplace new.

Taking that back to school, yes, we can play with that in the school environment in all kinds of low-risk ways. That’s why we’re here. That’s why we do it.