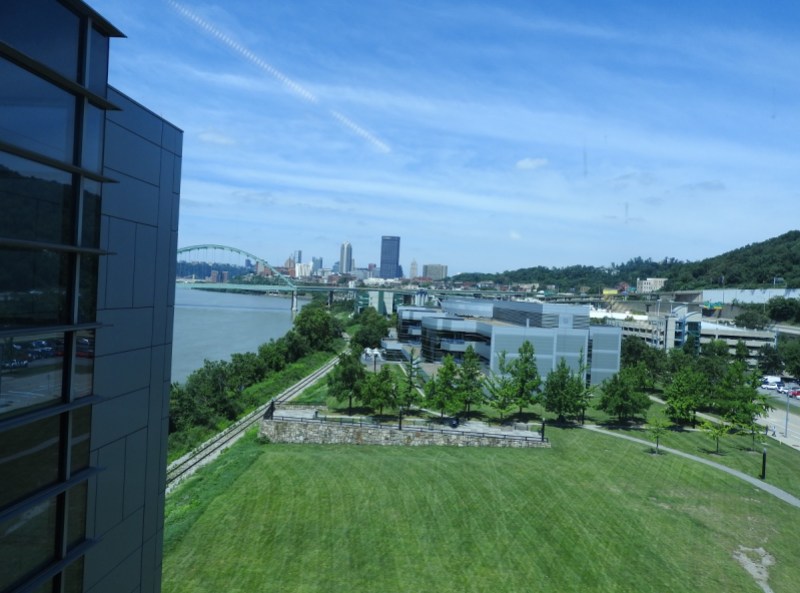 Above: The view from the Entertainment Technology Center.

GamesBeat: Are you seeing more women students these days?

Schell: That’s definitely been growing. I don’t know the exact percentage of women at the ETC. I don’t see much difference in where they go from here, much gender difference.

GamesBeat: The overall number for the industry is still about 20 percent.

Schell: I want to say ETC is about 35 percent if I had to guess.

GamesBeat: It’s definitely healthy for the country to spread things out more economically.

Schell: Pittsburgh has had a nice few years. When I moved here 15 years ago, a lot of things just weren’t here. Restaurants were kind of so-so. Now, Pittsburgh is getting nationwide acclaim for all the food things happening here. We’ve seen all the tech growth as well. Tech has always been here, but we have more successful tech and business growth.

GamesBeat: It doesn’t surprise me that your studio is one of the most scenic parts of the whole city. Game developers seem to be like that. Artists want to be in a place where they’re inspired.

Schell: Game developers are all about making wonderful experiences. It helps if the place you’re working isn’t a terrible experience. I’m trying to get a second book out now, but I’m not making the progress I’d hoped.

GamesBeat: Something about game design?

GamesBeat: Your AR and VR talk was interesting. You guys are making a lot of AR and VR things, and then, you go to this conference and say, “Here’s everything that’s wrong with AR and won’t be fixed for 10 years.”

Schell: I don’t know. The whole Silicon Valley thing is, you have too many people whose vested interest is in over-optimism. The investors, anything they’ve put their money behind, they have to present a face of optimism. Certainly, anybody making anything, who’s taking that money, they have to present that face of optimism. Then you have the fans, anybody who’s excited about it, they want to see it, and so, they have that natural optimism. As a result, you end up with what I see as — a majority of the word that gets out there is optimistic and unrealistic.

Since no one remembers the past, it’s OK that it’s that way. No one ever calls people to task. “Wait a minute. You said that thing would be out in 18 months. It’s five years later. What’s the deal?” That never happens because everyone’s already moved on to the next shiny thing. We’re in a different position. We’re actually making things work, and we’re not relying on anybody’s investment money. I just thought, why not go out there and give a more reasoned, more balanced view?

There are already some things happening that make me question it. When Apple popped out ARKit, that shifted things in some ways that I hadn’t really thought through. But I still don’t think it changes almost anything that I was proposing. Anyway, that’s why I wanted to go out there and do that. Too much hype ultimately gets you in trouble. Look at Magic Leap right now. They’re in a funny spot.

GamesBeat: More than a thousand employees.

Schell: They’ve taken as much VC as anyone in the history of Earth. They’re in the top three, at least. Them, Facebook, and Google. I think those are the three. 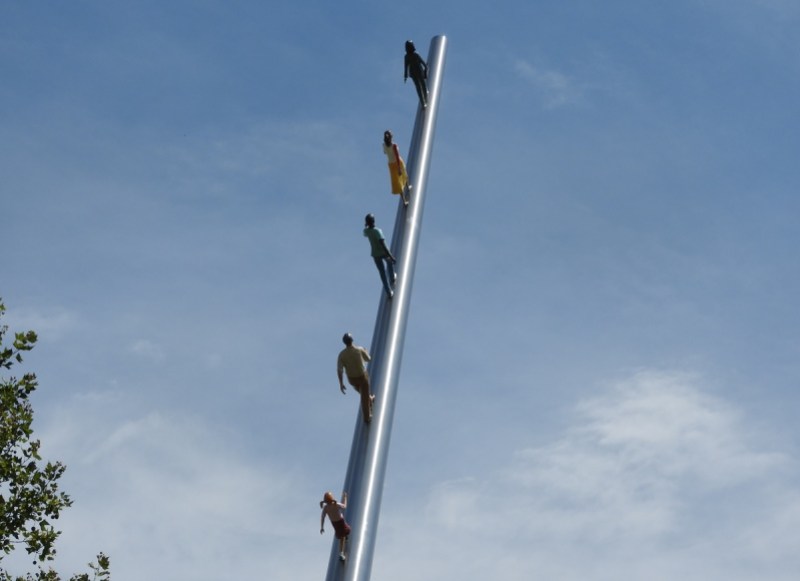 Above: Art on the Carnegie Mellon campus.

GamesBeat: It’s hard for them to ship something that doesn’t have one of those flaws you pointed out.

Schell: In some ways, I feel like AR right now is where VR was in the ‘90s. It was possible. We could build it. But for it to be really good, it was too expensive to be practical. It took 20 years to become practical. [There are] a lot of challenges.

GamesBeat: The approach, then — do you put five people on it to experiment or find a patron, somebody who’ll finance a larger team and doesn’t care about an investment return? Like the platform companies. They just want to push innovation forward.

Schell: We’ll do some of that. For example, we did a game for the Google Tango. We didn’t look at the Google Tango and say, “In a short term, this will be a hit.” There was no way it could be. But Google funded us. “Hey, see if you can do something pretty cool.” We did this domino game, and it is pretty cool. We do get some projects where people say, “Help us with this cutting-edge thing.” Same with Daydream. We did this Lego game for Daydream. Then, we get other people who’ve made their own hardware, which is a similar thing. “Can you help us get in early before there’s a market?” That’s a nice piece of it.

But then, you have entertainment companies who see something out there, and they want to get in somewhere. The problem is, right now in AR and VR, the big gaming studios don’t have expertise in it. The big entertainment companies can’t go to them because they don’t know anything about it. You have all these garage guys who know something, but if you have a world-class IP, do you trust it to three guys in a garage in order to make a meaningful experience? It’s a good position for us, to be a stable company with expertise in this stuff. It’s brought a lot of world-class folks to our door because they don’t know where else to go. That’s gone well for us.

GamesBeat: Paul Bettner’s Playful company, the original team that made Words with Friends, they have this VR company that made Lucky’s Tale. They have a team of 60 people, and they’ve raised money, but they’re all in on VR. Then, they looked at the opportunities they had and turned Lucky’s Tale into a 2D-screen platform. The VR platform got everyone excited, but it turns out that the Xbox One might be their biggest opportunity for sales.

Schell: The things we’re looking at right now — ultimately, for VR, social is going to be what drives sales. The problem is you have a network externality problem because the number of people is limited. The thing I always say is, until you have 10 million customers on a platform, you have significant network externality issues to overcome. It’ll be a while until we’re at 10 million for VR.

What we’re looking at now are games that are social and that are VR — but can also be PC. The PC players can interact with the VR players. It just happens that the VR players are way cooler because they’re more expressive. They maybe have more powers. This way, you can get your millions of players but also have a deluxe VR experience at the same time.

Above: Schell Games has made a wide range of games in its history.

I think, if there’s going to be a breakthrough title — I think VR is looking for its Space Invaders. It wasn’t until I really started looking at video game history that I understood how important Space Invaders was. Before Space Invaders, arcade owners didn’t believe in video games. They had them sometimes, but they weren’t earners, not as much as pinball machines. Then, Space Invaders comes out, and suddenly, it’s earning five times what a pinball machine earns. Then, the operators fall in love and tell the industry, “C’mon, guys, we need more stuff like this.” That was a watershed moment.

Here’s the part I didn’t fully appreciate. At the same time all that was happening, home consoles had been out. The Fairchild Channel F was out. The Atari VCS was out. But they weren’t doing well. These things were not received with open arms. “This is pretty expensive. Is it really better than Pong? I don’t know.” Then, Space Invaders happened, and not only did that change the arcade world, but at that moment, suddenly, the world is in love with video games, and the home consoles take off.

It’s weird. The knee in the curve for the Atari 2600 was a Japanese arcade game. Suddenly, Atari was popular. And then, very wisely, they did the first video game licensing deal to make Space Invaders, and that really changed things. But I feel like that’s where VR is now. We’re waiting for that Space Invaders moment, that thing that makes people really fall in love with it.

GamesBeat: It seems like that observation would be good for your next talk. Look back at the past and see where that brings you.

Schell: Right! We’re doing a lot of planning right now. We had I Expect You to Die out, and we’re trying an experiment with putting out new content for it. Not at extra expense, just juicing up what’s already there. We’ll see what that does. Does that build buzz and make more sales? But right now, we’re doing a lot of planning for what exactly we’re building in 2018. We have some ideas, but we’re still pulling it together.