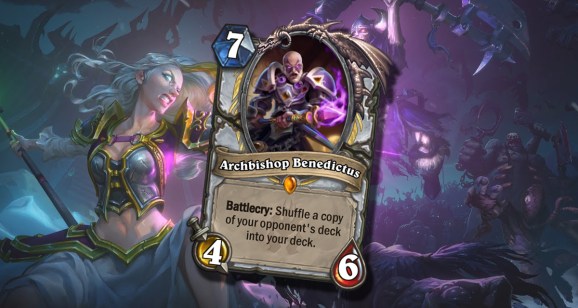 Archbishop Benedictus in Hearthstone's Knights of the Frozen Throne expansion.

Hearthstone has seen some pretty crazy cards since launching in 2014. The PC and mobile digital card game has given us a minion that makes everything choose targets randomly, spells that replace your deck with another class’s cards, and minions that can replace your Hero. But the Priest’s new Legendary minion, which will come out with the Knights of the Frozen Throne expansion sometime in August, is the game’s kookiest one yet.

Meet Archbishop Benedictus. He costs a whopping 7 mana and only has a meh-worthy 4 attack and 6 health. But his Battlecry, an effect that triggers when you play it, is incredible: Benedictus shuffles a copy of your opponent’s deck into your deck.

This is pure wackiness, and it’s beautiful.

Priest has some tools that gives them cards from their opponent’s hand or deck, but it’s just one or two. Some of these, like Thoughtsteal and Mind Vision, have been around since the game launched in 2014. But Benedictus will put their entire deck into yours. This could give you about 20 extra cards.

Now, is this a good card? Success in Hearthstone’s Standard mode usually relies on consistency. You make a deck with a game plan (like focusing on cheap minions that can quickly deal damage or planning to out-value your opponent with late-game cards). Adding a bunch of unplanned cards into your deck could ruin your game plan. You could draw stuff that might not help you out at all.

But who cares? Benedictus looks like a ton of fun. Not every minion or spell needs to help create some top-tier deck. Just look at Renounce Darkness. People are always making decks based around this card, fully aware that they probably won’t win even half of the matches. [My Renounce Darkness Warlock has a 37 percent win rate –Ed.] But the randomness makes it a ton of fun. It’s also nice to see card-stealing become more of a central theme for the Priest class, a concept it’s been focusing more on since Mean Streets of Gadgetzan with cards like Drakonid Operator and Crystaline Oracle in Journey to Un’Goro. It’s more exciting than just healing things.

The Hearthstone community already seems excited about Benedictus. On the game’s Reddit page, a post about the card has 6,322 upvotes, more than any other reveal for the Knights of the Frozen Throne expansion from the past month.

F2P Player – just craft this one Legendary and every deck ever will be yours! pic.twitter.com/W2QqDwmqcW

At the airport coming back home, and then open Twitter to find this. Oh. No. pic.twitter.com/IkYocwo7gj

… to disappointment in Priest getting a “meme” card (meaning it’s more about having fun than competitive play).

I expected nothing and I'm still disappointed pic.twitter.com/soq0cIQTUN

While Blizzard is touting Death Knights and Lifesteal as big features in the new expansion, this Priest Legendary may upstage everything else in the set. We’re reached out to Blizzard to ask about how it came up with this crazy concept. Hopefully we’ll learn more about Benedictus’s design if Blizzard gets back to us.