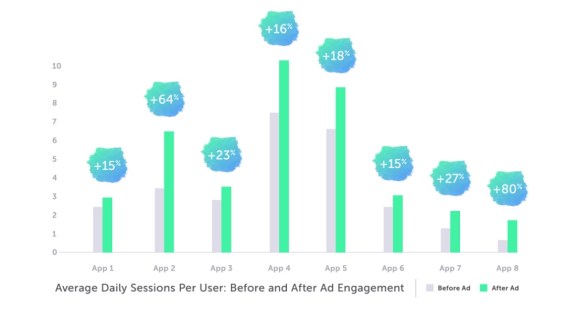 Tapjoy shows that engagement grows after a user engages with rewarded video ads.

App users who engage with rewarded ads are 4.5 times more likely to make an in-app purchase, according to a new report by mobile engagement and monetization firm Tapjoy.

The study said that such users spend 326 percent more money via in-app purchases after engaging with ads, said chief revenue officer Shannon Jessup, in an interview with GamesBeat at the Casual Connect event in Seattle.

Rewarded advertisements — also known as “opt-in” ads — allow users to earn in-app currency or unlock premium content in exchange for watching videos or engaging with other types of advertising content.

In a detailed analysis of eight apps with a high volume of daily active users (DAU), Tapjoy found that seven of the apps showed significantly higher IAP conversion rates among users who engaged with ads versus those who did not.

While the average increase was 4.5 times, two of the apps experienced an increase of at least nine times — meaning that users were over nine times more likely to make an in-app purchase after they engaged with a rewarded ad.

The study also showed that users are likely to spend more money in the app if they first engage with a rewarded ad. In all eight apps studied, in-app purchase spend increased significantly after users engaged with an ad — by an average of 326 percent. Across the apps studied, the boost in average spend per user ranged from just shy of 200 percent to over 500 percent.

Some app developers fear that giving their users the option to earn currency through rewarded ads will reduce the likelihood of user spending, Jessup said. But the data says otherwise.

Rewarded ads also appear to have a positive impact on user engagement, according to the study. Across all apps studied, the average number of daily sessions per user increased 34 percent among those that completed at least one rewarded ad.