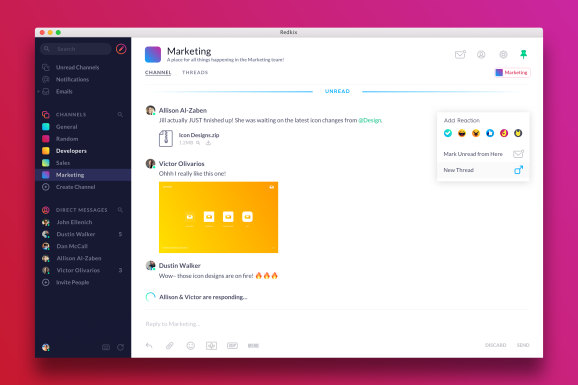 A screenshot shows the Redkix app.

There’s a new startup in town that’s trying to help bridge the gap between workplace instant messaging services and email. Redkix announced today that it’s opening the beta version of its product, which lets people inside an organization host chats that include group instant messages and emails.

People who don’t use Redkix will get emails with every direct message and channel message they’re included in. They can reply to those messages via email, and their response will show up alongside all the other messages in the interface for Redkix users. Each email will appear to come from the person who posted the original message inside chat, but replies to group chats will go to the whole group.

The system is designed to help Redkix clear issues of uneven adoption inside teams, which is one of the biggest hurdles in implementing collaboration systems. Entire deployments can fail to gain traction if a key member is unwilling to join, or if only a small group wants to use a new service.

Redkix CEO Oudi Antebi said he thought the service’s openness would help it stand out among a fleet of competitors. The company faces an uphill battle against the likes of Slack, Microsoft Teams, HipChat, and others.

The product is built for use in highly regulated environments. Redkix is currently on track to receive its ISO 27001 security certification, with SOC 2, SOC 3, and HIPAA certifications coming later.

Starting today, the company has opened up a public beta of Redkix for anyone to try. The service’s premium plan, which will allow users to access more of their message history within the Redkix apps for iOS Android, Mac, and PC, has entered a closed beta.