This year, the bulk of the revenue will still come from games across all platforms, which will generate $87.5 billion compared to interactive media’s $6.3 billion. However, SuperData predicts that by 2020, both segments will grow enormously, with interactive media generating $45.4 billion and games generating $123.5 billion.

The esports market alone could triple its size by 2020, reaching $1.5 billion. It’s already nibbling into the audience of traditional sports, attracting a tech-savvy viewer base who prefers online livestreaming over broadcast television. When the Electronic Entertainment Expo rolled around in June, around half a million people were watching it on the popular livestreaming platform Twitch. But the same number of viewers ignored the largest industry event of the year, choosing instead to tune into esports.

SuperData reports that the global audience for gaming video content (GVC in the chart below) comes in at 665 million this year, dwarfing other online subscription services. YouTube unsurprisingly sits on the top with 517 million viewers. 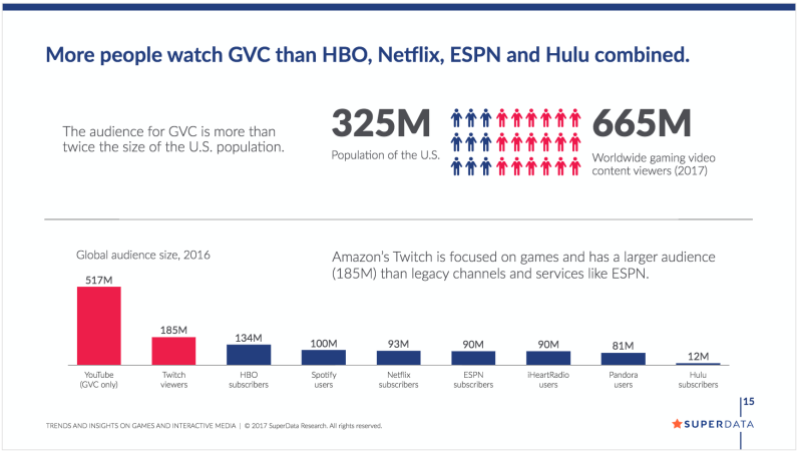 The report also re-affirms the importance of digital sales and downloadable content for developers and publishers. Though it’s by a slim margin, players will spend more on additional content ($4.1 billion) than on full games ($3.7 billion). It’s something that publishers have said before; last week, Electronic Arts noted that live services gave a significant boost to their Q2 numbers.

The No. 1 games across platforms are unsurprising: tThe multiplayer online battle arena League of Legends tops the PC charts, while soccer smash hit FIFA 17 is at the top for consoles. On mobile, the winner is the Chinese MOBA Honour of Kings, which boasts over 200 million players. All three are esports, with League still maintaining its popularity as one of the top esports games around. 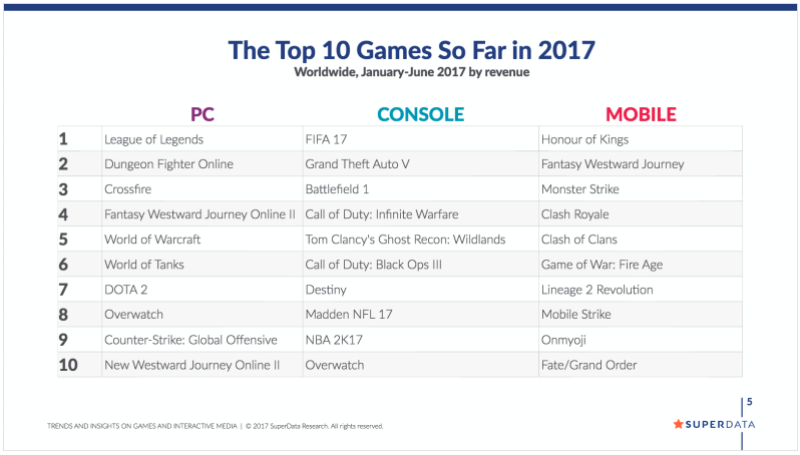 In looking at the VR segment of interactive content, SuperData was optimistic. It projects that the trough of disillusionment will be overcome and that by 2020, VR software will overtake hardware for the first time. This year, SuperData projects revenues of $3.7 billion, $2.7 billion of which comes from hardware. By 2020, it predicts $12.1 billion will be from hardware, and $16.2 billion from software. 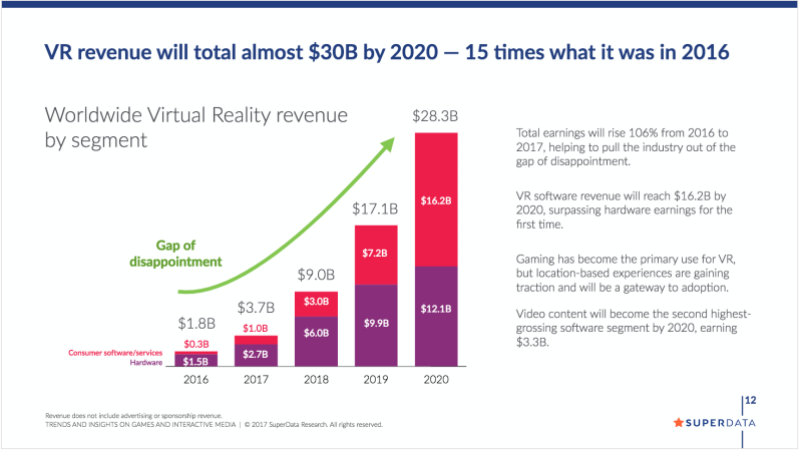