The Shrouded Isle is the third release from the four-person indie studio Kitfox Games. It has a moody gothic look and an equally grim premise that takes inspiration from H.P. Lovecraft novellas such as The Shadow over Innsmouth. As often happens in Lovecraftian lore, the town in The Shrouded Isle is beholden to a cruel and unforgiving eldritch horror. Your role as the high priest is to appease the god Chernobog through seasonal sacrifices and inquisitions. This is a game where you stare into the abyss and the abyss turns out to be a slog through just another day of running a cult.

Sure, these folks are oppressed by a fickle elder god who understands no mercy and has zero sympathy for human suffering — but, hey, on the bright side, they’ve got a trendy medieval gothic look going on! I heard that’s in this summer.

The default color scheme is a sickly bile-yellow, and though you can switch, the others are all monochromatic and equally dismal, which hammers home how bleak and hopeless everything is for the ill-fated villagers. Some of the art and the portraits of different characters also have a cool aesthetic, reminding me of broody graphite drawings, and the background music is appropriately ominous. All in all, there’s a ton of atmosphere that’s done very well. At the start of the game, you’re three years away from Chernobog’s inauspicious return, which means you have to survive 12 seasons. At the start of each season, you select an adviser from each of the five houses in the village. Once it’s over, you have to sacrifice one of them to slake Chernobog’s thirst for blood, suffering, destruction, mayhem, yadda yadda.

This can be tricky, because the bulk of the gameplay is balancing how each of the houses feels about your leadership as well as different attributes for the village. Each house specializes in one of the attributes: ignorance, fervor, discipline, penitence, and obedience. And every adviser has their own virtues and vices that can either add to the attributes or subtract. If the attributes drop too low, then you lose control of the village; if you sacrifice too many people from one house, then the house rebels and you die.

The interesting part is that you’re supposed to feel bad about your decisions, but then eventually you get pulled into playing a numbers game. I felt pretty gross about burning books and murdering scholars, but I had to do it in order to win. Sometimes I also got stuck sacrificing people for minor vices instead of major ones. Was it the villager’s fault that he was stubborn? No, I just had to fulfill a quota for the season.

The Shrouded Isle emerged from a game jam with the theme “you are the monster,” and it does a great job at making you feel like a horrible person. And then you get used to how horrible you are, and you realize how terrible your decisions are all over again. There’s a lot of repetition without the feeling of progression. Each of the characters has a little one-liner about them when you hover over their portraits, but it doesn’t actually impact your decisions about whether or not to sacrifice them. You never really learn more about them. Each person’s vice or virtue is also randomly generated, sometimes unrealistically so. At one point, I found someone whose virtue would raise obedience … and whose vice was disobedience.

The system reduces the characters to a set of stats. This is cohesive thematically, but it doesn’t really make for very fun gameplay. After my third play-through or so, it started feeling humdrum. I’d try to figure out each adviser’s vices or virtues, select them, sacrifice them, hunt down randomly generated sinners for Chernobog, and then repeat once the next season starts. 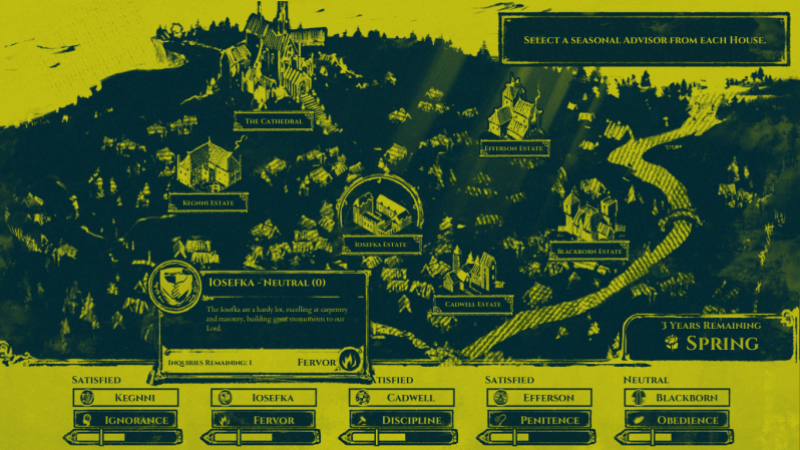 Not enough to do

Occasionally, an in-game event occurs. In one event, for instance, a young man is washed ashore, and if you choose to interrogate him, he gives you more details about the outside world. However, that was the only event of its kind that I saw; all the other ones only served to either increase an attribute or win you one house’s favor over another’s.

I wish there was more plot or that we learned more about the world, the village, and how it came to worship Chernobog. Instead, the game slavishly sticks to the numbers game, and everything else just feels like flavor text. This would be okay, except there isn’t that much flavor text either. I appreciate that The Shrouded Isle isn’t supposed to be all about fun. After all, it’s all about being in a murder cult that trades in ignorance and absolute obedience. Once the initial shock of sacrificing people for minor offenses wears off, though, I really just want to know more. It was frustrating when at the end there wasn’t that much pay-off.

It’s a stylish game centered around an interesting moral dilemma. However, there just isn’t enough world-building to hammer the point home.

The Shrouded Isle comes out on Steam for PC on August 4. Kitfox Games sent us a code for this review.