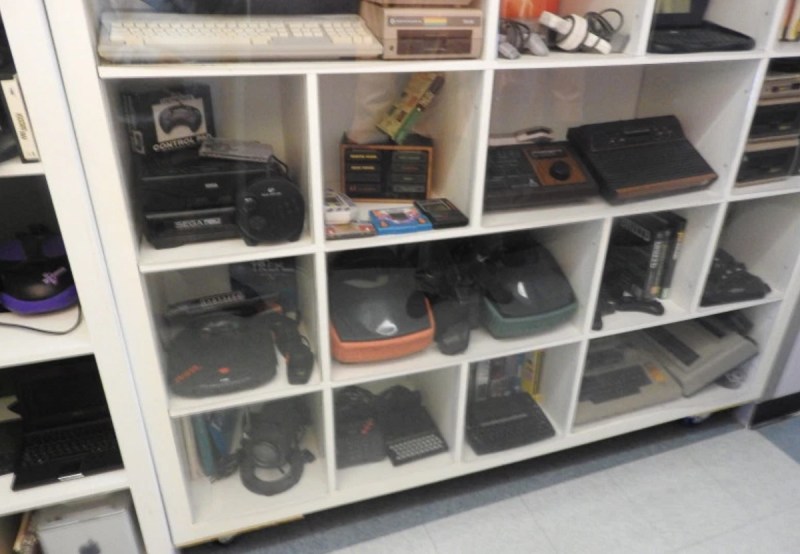 Above: A collection of old video game systems at the ETC.

GamesBeat: How do people figure out where they want to go deep in the program?

Davidson: A couple of things will happen. Sometimes students come in with a pre-conceived notion. Sometimes they come in wanting to take a left turn. “I don’t want to become a programmer. I want to become an artist, so I’ll come to the ETC to become an artist.” But that means you’re competing with people who actually went to art school. It’s a hard left turn to take in two years with a curriculum that’s so project-focused. It’s not impossible, but you have to do it around the curriculum, whereas if you go to art school you’ll get fundamentals. You’ll get color theory. You’ll get life drawing. You’ll build the foundation.

It’s hard to do a left turn away from something, which is why we’re primarily a grad program right now. People are coming to us with skills that we assume you’re going to build on from there. If you have a background in tech, you want to be a programmer and build on that. We can help you become a programmer with a technical artist focus, a game design or experience design focus, or storytelling.

A big thing people recruit from us are leads – producers, programming leads, someone with leadership potential because they went to grad school. We teach leadership as taking responsibility for yourself and your team, not just being the boss and telling people what to do.

When we see people coming from undergrad, at least they’re building on that. Then we start having conversations with them. Everyone gets assigned a mentor here. Our product, as it were, are graduates. We’re not saying, “Here, look at all our patents.” We have an education experience that turns out professionals, like Neil Druckmann from Naughty Dog. He’s one of ours. Kyle Gabler, who worked on World of Goo. That’s what we’re trying to do, turn out people who will push how we do things in new and exciting ways.

At a graduate level you’re building on something you did as an undergrad. Maybe you’ve had internships and stuff. That’s a big thing we push for undergrads. Think about internships so you can get in and dip your toe in the water. In some ways, at a certain age we’re like, “Oh, all this in front of me is what’s possible.” Then you’re like, “Well, but I don’t want to do art school, and I know I don’t want to live in Delaware.” Eventually you find a tighter range. “I’m interested in here. Science and art, that’s not bad. Maybe biology?” You get a sense. Sometimes it’s easier—even if you’re not sure exactly what you want to do, you know what you don’t want to do. That can help you start focusing in. We do a lot of mentoring around that.

In undergrad here, have they told you about IDeATe? It’s a horrible academic acronym. I think it stands for Integrative Design, Arts, and Technology. It’s cross-discipline minors, Whatever your major is. BXA is kind of the Cadillac of that. Anybody can take an IDeATe minor, though, and I think there are eight – game design, animation, mobile, robotics, entrepreneurialism, others. The business school used to have an entrepreneurial center, and last year an alum named Schwarz gave like $33 million to turn the business school’s entrepreneurial center into the university’s entrepreneurial center. They’re really supportive. You can go there with an idea and they’ll help you start a company and build on that, complete this project above and beyond your studies. 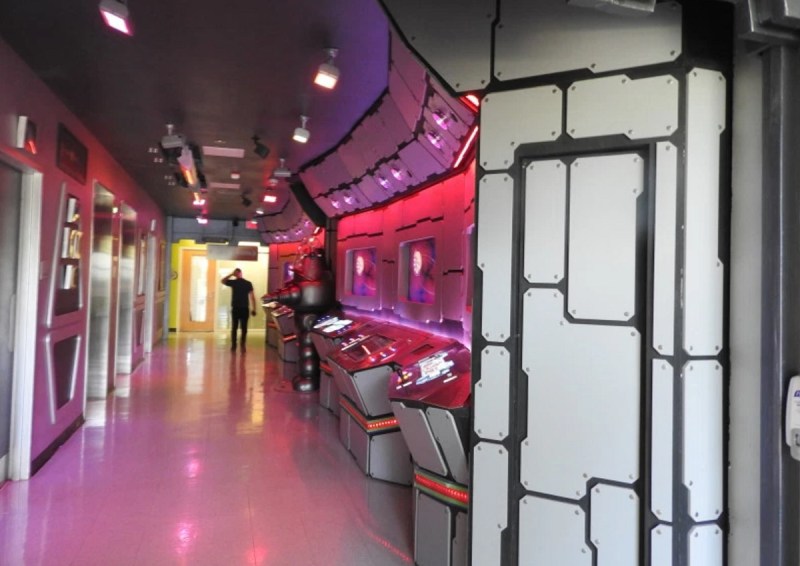 Above: The Entertainment Technology Center is a colorful place.

Davidson: CMU students own their IP, which is fairly normal, except in some cases. At MIT you don’t own your IP. You sign it away to go to school there. You can transfer and make money. But with CMU you own it 100 percent.

It’s fun, on an undergraduate level, thinking about those minors. There’s a game development club here. There are all kinds of clubs. Student-driven theater, if you get into that. Some of the weird stuff—there are weird fashion things happening. What’s cool about CMU that I think we take a lot of pride in is, our science is good, but so are our arts. People start to interact and cross over.

We sometimes miss out on that down here. The reason we came down here—all those projects I was talking about, we have rooms big enough that they can sit together, like a little mini-company. Team six, here’s your office. You’ll live there for a semester. They probably spend 80 hours a week working on their projects.

GamesBeat: Has it always been down here, away from campus?

Davidson: No. When it started we were up on campus in the attic and basement of the computer science department. I don’t know if you’ve seen their building, but it kind of looks like a WWII bunker. I wasn’t here when it was founded. I was in Texas. My dissertation advisor was a woman named Sandy Stone, who was friends with both Randy and Don. We knew when the ETC started because I was studying with her, specifically because she had something called the ACTLab. It was very similar to the ETC, but it was smaller.

Between me doing those studies and those introductions—I’d worked in the industry and I had a PhD. I’d run some programs at universities. Don and Randy said, “Hey, do you want to work here?” And how do you say no?

Anyway, they started in any place that they could get. Then input from the industry, which is kind of common sense—they told us that our student teams would be more invested in doing better work if they could sit together, instead of sharing computer labs where they had to sign up for time. There was space down here, so we moved. It helped us coalesce into a center, as opposed to, “Well, there’s thing called the ETC, but it’s over here and over there and down here.” 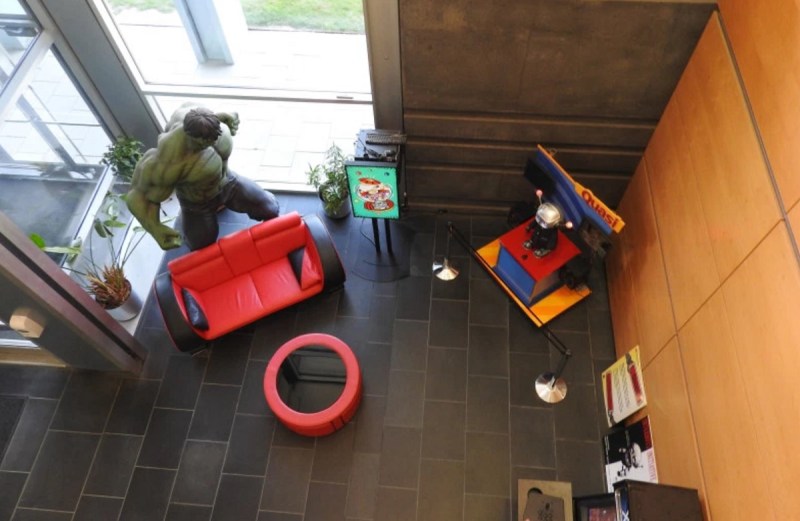 Above: The lobby at the ETC.

Davidson: It changes the vibe. But now there’s this big push to try to get us back up on campus. By nature we’re interdisciplinary, and we do a lot of collaborations on campus. “Oh, you should come up on campus, we have all these new buildings.” But space in the university is some of the most political stuff ever. And we’re big. We’re not the only tenant in here, but we have four floors, pretty much, full of 150, 200 students total, 50 faculty and stuff.

This was a past project. You get a sense of the range. Some students and faculty, years ago, said, “This is the range of the work we do. We think that’s our strength.” They made these little icons. This is metallic paint. They started creating a history wall of what they think is important. This represents what students across three years thought was a timeline of the program.

During that first semester they all sit here in the bullpen, cram ‘em all together. They bond. It gets moist. We have hygiene products. That’s boot camp. You survive it together. You mentioned the decorations. Don Marinelli, who came out of drama, is a big fan of trying to surround people with what’s out there. It adds excitement to the building, and it’s a way to challenge and inspire our students to what’s next, to what’s out there and big. We try to mix it up. We have a lot of alums in the industry, people at Disney and Lucas, so there’s a better mix now. Sometimes it was donated, or Don found it and liked it because he thought it represented some pop-culture moment.

This is usually where they eat. We have a lounge. There’s a class I teach where they’re required to play video games and then analyze and talk about the experience. We have two or three classes in board games, too, some with Stone Librande, who worked at Maxis for years on Sims and Spore.