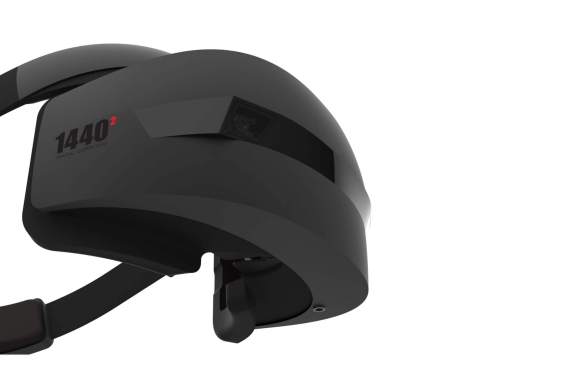 This week we got our hands-on the first development kit edition of the HP “Windows Mixed Reality” VR headset. Right off the bat let’s clarify that verbiage. Microsoft is using the term “Mixed Reality” as an umbrella to encapsulate VR, AR, and all other related devices. The HoloLens, for example, is Microsoft’s AR platform while the HP and Acer headsets are their VR platform (although they refer to them as “Immersive” headsets in documentation, but whatever, they’re clearly VR headsets.) So it’s a little confusing, but just know that these are VR headsets, not mixed or merged reality devices.

Both HP ($329.99) and Acer ($299.99) are working on their own dev kits (as well as ASUS and Dell) that share essentially the exact same technical specifications. According to the product listings they each feature:

As far as I can tell (having not tested the Acer dev kit yet, our package is out for shipping) the only difference between the two physically is that the HP has a “double-padded” headband and adjustment knob (as opposed to a strap-design on the Acer) and the HP’s cord can be detached, just like the PSVR. HP has also said previously there is more nose room in theirs too. Other than that they’re basically the same and operate using the same “Windows Mixed Reality Platform” on your PC.

The HP Windows VR headset is very much a dev kit right now. When I opened the box all I found was the headset in a mesh baggie, surrounded by some padding, and then some safety papers tucked underneath the cardboard lining. That’s it. No instruction manuals or anything like that. If you’re a consumer then you shouldn’t buy one of these yet. These are for developers first and foremost that want to get started making applications for the headsets and the platform themselves.

On that note the setup process was frustrating, at least for me personally. At first all you have to do is plug it in and the window for the Windows Mixed Reality Portal will automatically pop up and let you know if you need to update. As it turns out, not only do you need to enable your Microsoft account to be in the “Windows 10 Insiders” program to get pre-release versions of Windows 10, but you need to make sure the most up-to-date version of Windows (The Creator’s Update) is installed as well. If you’re working off of a relatively new machine like I was and hadn’t bothered updating in a while then this might be a major speed bump for you too. Luckily there is a handy checklist online to get ready. After several hours of updates and multiple restarts, I was finally good to go though.

For reference, I am currently using the HP headset on an HP Omen machine, which has a GTX 1060 GPU and Intel i5-7400 CPU with 8GB of RAM. That easily falls into the range of system requirements. I tried using it on my relatively lower end laptopwith an AMD FX-9830P Processor and Radeon RX 460 GPU. According to the Setup Wizard the GPU wasn’t powerful enough.

Once the Mixed Reality Portal was open I started the setup process, part of which is shown in the purple image above. It was a lot like setting up SteamVR for the first time since I could pick a roomscale option or a seated/standing option. If I picked roomscale then it had me point the headset at the screen (cameras facing out) and then trace the entire room, just like I’d do with the motion controllers for a Rift or Vive. For seated, I’d just point it at the screen and then I’d be good to go.

After doing that I turned on my Xbox One controller (it only supports that or a keyboard and mouse right now) and plopped the headset down onto my face. The loading screen asked me to look around a bit before placing me inside of my default office nook environment.

Once inside things were pretty easy to get the hang of — you can see what the default Home environment is like, plus a few of the apps, in the video above. However, please be aware that when inside VR the resolution looks much crisper and all of the visuals are much better. Since I was recording the output feed on my desktop it’s of noticeably lower quality and is not representative of what it actually looks like inside the headset. Using my gaze I could look around and select things like the Holograms app on my wall. After picking it I could look around and place virtual objects to decorate the space. Now I have a cute little dog looking at me from the corner so it feels like home.

As far as I can tell the only apps you can use are those that come from the Windows store. If I press the Windows button on the keyboard or the center Xbox button on my controller then it brings up a Start menu-style interface (shown above.) I can pick some pre-selected apps here like Microsoft Edge for web browsing, a Photo viewer, a Video client, and more. Among those suggested are games as well, like Candy Crush, and Minecraft. If launched, they appear in a floating window just like other 2D apps.

All of these windows can be moved around freely in the environment so I can really customize what my version of “Home” feels like inside Windows VR. Pinning stuff, like you would on your Windows 10 Home menu, works great and lets you keep things easily accessible. The loft area is really spacious and has a lot of wall real estate so I could easily see myself putting a few Edge windows in one room for web browsing, then placing a couple games in another room.