Politics has become virtually inescapable, whether on social media or in games. For the nonprofit iCivics, this isn’t a recent development. Former U.S. Supreme Court Justice Sandra Day O’Connor founded it in 2009 to provide tools for civic education with free games like Counties Work and We the Jury, which are all available on the web. Its most popular, like Executive Command and Win the White House, are also on iOS and Android.

iCivics develops free lesson plans and games for students ranging from elementary school to high school, and it’s careful to be nonpartisan. The goal has always been to start the conversation and give students information, not to sway their political beliefs; however, executive director Louise Dubé told GamesBeat that in the current political atmosphere, it’s been tougher than ever to do so.

“Obviously, the country has gotten more polarized,” said Dubé in a phone call. “What started out as a non-partisan stance in some of our games is now being challenged as potentially partisan, because the policy proposals in real life are more polarized. We think about that a great deal.”

To counteract any possible partisanship, iCivics has an internal review process that’s reviewed by academics. Once a game is published, they review the content based on feedback they receive and adjust as needed.

“If people have issues after the publication of the content, we take a look at it again, but for the most part, when we get as many comments from the right as we do from the left, we feel like we’ve probably done our jobs,” said Dubé.

iCivics gets the most traffic around presidential elections, but they also see activity throughout the whole school year starting in August when most students return to the classroom. After the 2016 presidential election, Dubé says that they received a significant uptick in traffic.

“We had a 20 percent increase in interest in games like Executive Command and Win the White House, which were related to events directly,” said Dubé. “We saw more than 200 percent increase in traffic. We’ve had 90,000 user reviews this year. It’s been a tremendous experience. It makes the point that games for learning are effective.”

Because of the young age of most of their players, iCivics doesn’t capture information from them directly. However, it recently sent out a survey for teachers and received about 1,200 responses.

“They cited as the number one impact on their classrooms the fact that it engages kids in all classroom activities – not just civic education, not just social studies,” said Dubé. “They’re more awake. They’re more interested. That’s a basic message about games.”

iCivics games are primarily role-playing games, a deliberate design decision to give players a feeling of ownership over their actions. In Win the White House, for instance, players design their candidate and then take turns campaigning against an AI opponent. They fundraise, choose which issues are on their platform, participate in debates, and design ads. Counties Work has a heavier focus on resource management. As the county chair, the player has to balance fundraising, building public spaces, popularity ratings, and helping citizens find the right department to address their issues. 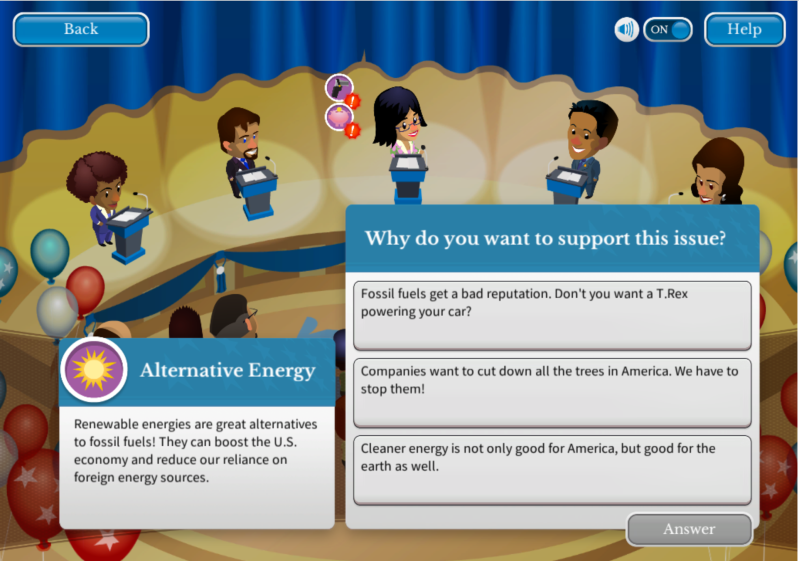 Above: A debate from Win the White House.

Though Dubé spoke recently at the Games for Change Festival earlier this week, she says that most of their outreach and growth come from word of mouth.

“The more teachers use us, the more they tell other teachers. That’s how we’ve been able to grow organically,” Dubé said. She added, “The other thing we do is we have an educator network. That has 91 members now, all over the country, and they’re fantastic ambassadors. They help us get the message out in their regions. They run webinars and help us on social media and get the word out in other ways. But we don’t really do much direct outreach otherwise.”

In an annual report, iCivics noted that its lesson plans and games saw use from about 130,000 U.S. teachers in 2016, and its games were played 7.5 million times by around four million students. It runs on donations from private citizens as well as grants from institutions such as the MacArthur Foundation and the Carnegie Corporation.

Counties Work is a big focus for iCivics right now, especially as local politics are discussed more than ever. It’s got some other projects in the works, though, such as a Spanish-language version of its most popular game, Do I Have a Right?, which explores the Bill of Rights and will be out this December. It’s a project that Dubé says that Justice Sonia Sotomayor has been advocating for as part of the board.

“That’ll be super exciting, because it will be the first time we provide a full range of support to English language learners,” said Dubé. “It’s not only a translation, but it’s also a tool for students to decipher difficult academic vocabulary. We’re also offering professional development support for teachers.”

To tackle the lull in activity during summer breaks, iCivics has also put together a “virtual backpack” of activities for kids to do when they’re outside of the classroom. It’s something that Dubé hopes that parents and their children can do together.

“It’s always hard to make the transition from school to home, but our games are a very good way to do that. I think there’s a tremendous interest level in our demographics,” said Dubé. “I think it’s the perfect time to do that, but we don’t have a specific program to do it right now. I think that parents might actually learn something, too. It’s a two-fer.”