After today’s stream of reveals, we’ve now seen every new card that Blizzard is introducing in Hearthstone’s Knights of the Frozen Throne expansion, and some of them are nuts.

Knights of the Frozen Throne will introduce 135 new cards when it launches Thursday (that’s August 10) for PC and mobile. These new minions, spells, and Death Knights will keep players engaged (and buying card packs) for a few months. Some of the new cards, however, are more exciting than others (such games need a few bad and boring cards, after all). That’s why we’re highlighting 10 of the most intriguing new additions coming Blizzard’s hit free-to-play game.

Note that we’re not picking the 10 “best” new cards. Some of these could end up not being all that powerful or useful in either Standard or Arena modes, but their effects or design stand out for their innovation or wackiness. Many of them show how Blizzard is now willing to add more complexity to Hearthstone, which could use it now that we’re a couple of years removed from its debut and more competitors, such as The Elder Scrolls: Legends and Shadowverse, are on the scene.

But yes, some of them do look stupid strong.

Uther of the Ebon Blade 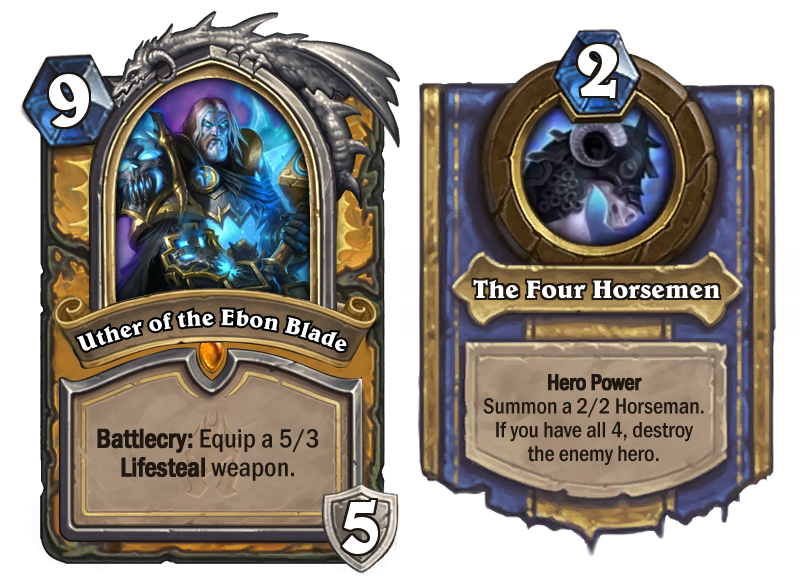 Right now, the only way to win a Hearthstone match is to kill your foe by depleting their health. The Paladin Death Knight card changes this. If you can manage to use the new Hero Power four times, without any of the summoned Horseman dying, you win the game.

Now, this is win condition is going to be a pretty hard task to complete since you can only use your Hero Power once a turn in the Standard format (although Auctionmaster Beardo can help). So this card might not be able to consistently win games, but it sure will be fun to experiment with. It’s great to see Hearthstone mess around with alternate win conditions.

And even if summoning all four Horsemen proves almost impossible, this Death Knight’s 5/3 Lifesteal weapon could still be pretty useful. 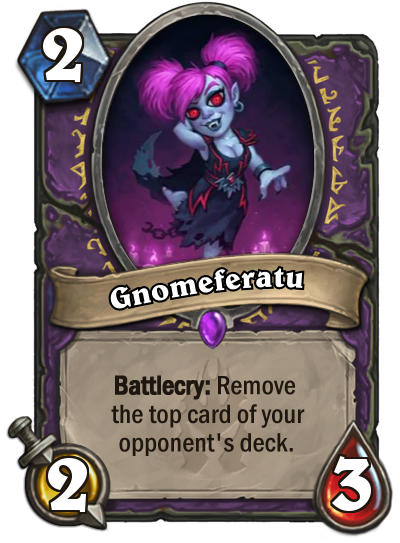 Above: Cross your fingers.

This is another new mechanic for Hearthstone. Before, you couldn’t force your opponent to discard a card unless their hand was full. Gnomerferatu is the first minion or spell that straight-up makes the other player to throw away their next card.

The 2/3 stats for 2 mana are pretty standard, but you could get lucky and make your opponent drop an invaluable combo piece or some high value minion. Imagine making a Quest Mage burn Archmage Antonidas.

Gnomerferatu could be a sign of more forced discard mechanics coming in the future. 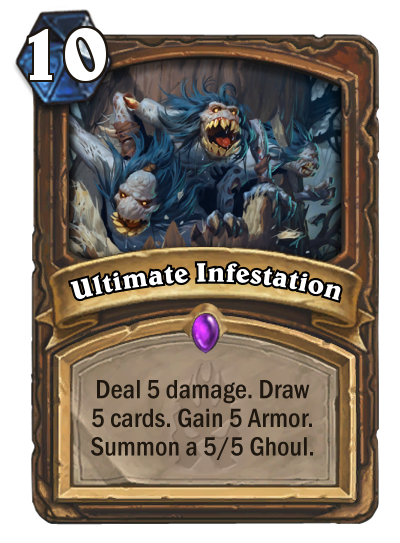 This is just an insanely strong card. Drawing cards during the late part of a match can be invaluable, but it often sucks to waste mana only on draw. Ultimate Infestation gives those cards while also dealing direct damage, providing some armor, and adding a 5/5 minion to your board.

This could help you solidify a lead or swing a losing scenario back in your favor. Usually, 10 mana cards are too expensive to see consistent play, but this one has enough value to make the high cost worth it. Or, if you’re impatient, you can use Druid’s mana ramp cards like Innervate to help you play Ultimate Infestation much sooner. 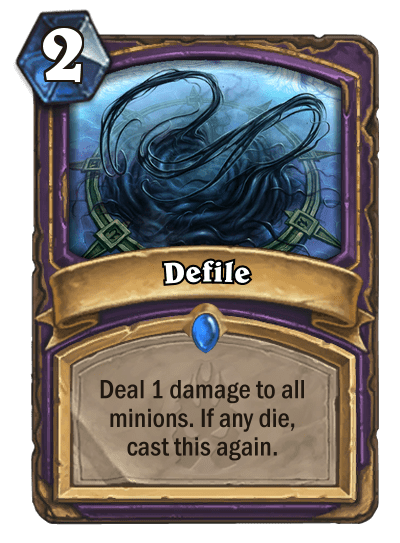 Above: Take that, aggro decks.

This is a creative board-clear card. Aggressive decks run a lot of minions with 1 or 2 health, so Defile can be a great tool against them. If Pirate Warriors are still giving you trouble, this could be the spell that gives Warlock an edge. It can even help stop your opponent’s early tide of cheap minions if you play it soon enough in Arena.

You can even run some of your own cards with helpful Deathrattles, like Arfas, to help you clear more minions while giving you extra benefits. 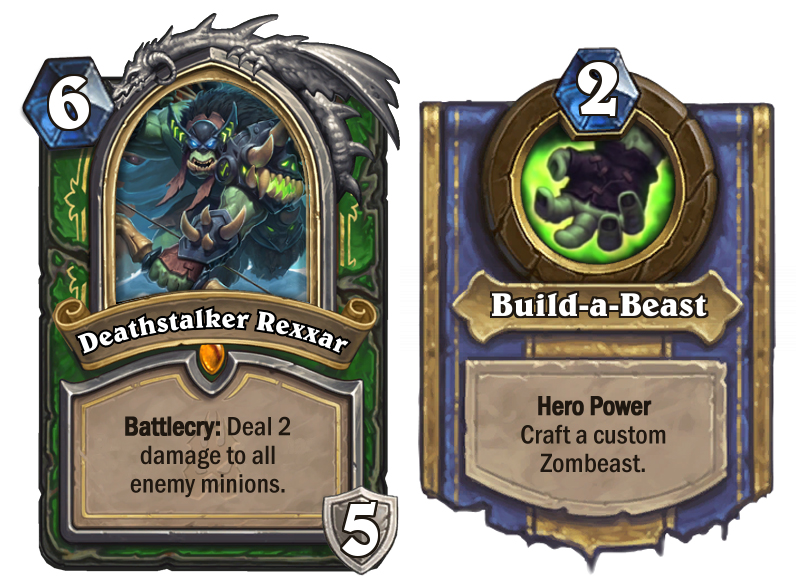 Above: Do you want to build a Zombeast?

Build-a-Beast has you Discover (you pick one of three cards) two Beasts that cost 5 mana or less and then combine their stats and abilities (this doesn’t use 6 mana Beasts since you wouldn’t want a minion that costs more than 10 mana). While you won’t know what you’ll end up with, just being able to get a decent minion every turn is a powerful tool for the later parts of the game.

Right now, most Hunter decks thrive in the early and middle parts of the match. But the class has had problems generating value if it doesn’t kill its opponent quickly. Build-a-Beast makes it so that you’ll almost never have a dead turn, giving you the capability to make some kind of minion to play on every turn. It’s the card that can finally make Control Hunter happen. 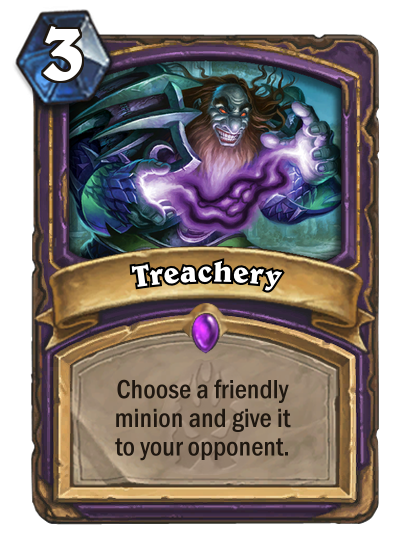 Some Deathrattles have negative effects. Treachery lets you mess with your opponent by screwing them over instead of you.

Imagine playing Bomb Squad, getting to use that powerful Battlecry, and then giving her to the other player before the Deathrattle triggers and takes away 5 of your health. You could also manipulate the new Rattling Rascal with Treachery, making it so that you get two 5/5 minions.

It’s a lot worse in Arena, since you’re less likely to have a card you’d actually want to give to your opponent. But with some good deckbuilding in Constructed, this could be a fun spell. 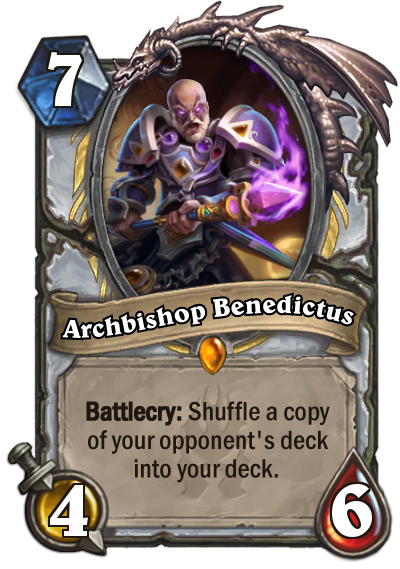 Above: Why steal a card when you can take the whole deck?

This card is so nuts that I’ve already written another story about it. It puts every card that’s still remaining in your opponent’s deck into yours. Most people only put good stuff in their decks, so that effect could be pretty helpful.

But even if it isn’t (you might get a bunch of Freeze spells from a Mage that doesn’t play any minions or weapons anyway), this is such a crazy concept that you have to applaud Blizzard for trying it. 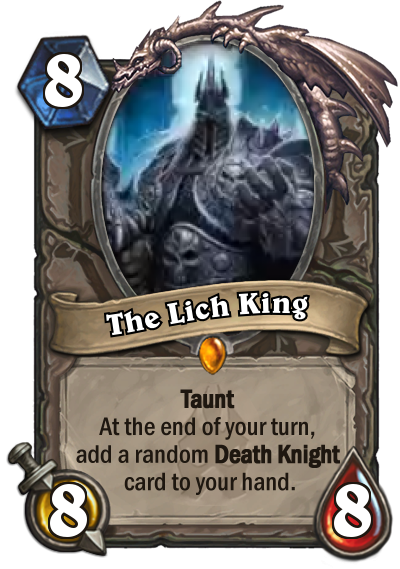 Above: Now that’s a card.

The Lich King works kind of like Ysera. At the end of your turn, you get a random Death Knight card, of which there are eight. Most of these are powerful. Death Grip, for example, is a 2 mana spell that steals a minion from your opponent’s deck and puts it in your hand. Frostmourne is a 7 mana 5/3 weapon that summons every minion it has killed when it expires.

Those Death Knight cards are nuts, but The Lich King has a great 8/8 stat line with Taunt. He could become a standard addition to any Control deck. You can even get him off a Stonehill Defender, which is already a popular minion. 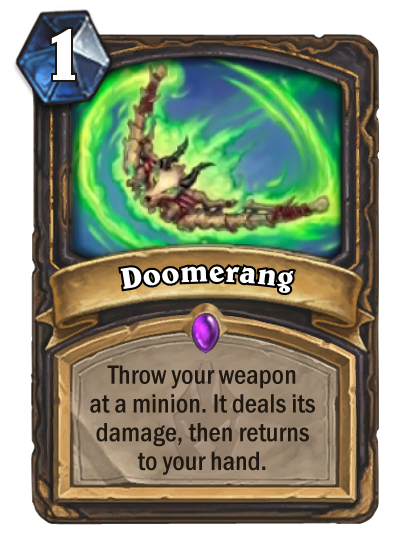 Above: Thumbs up for just for the name.

You have to just love that name, Doomerang. It’s beautiful.

But this Rogue spell could be a big deal. It refreshes your weapon, since after you play Doomerang you can then re-equip it with the original durability. It could also help you deal some quick burst damage. You could attack with an Assassin’s Blade for 3 damage and then follow with Doomerang for another attack.

Also, this is a 1 mana spell, so it could work in the Miracle Rogue archetype. 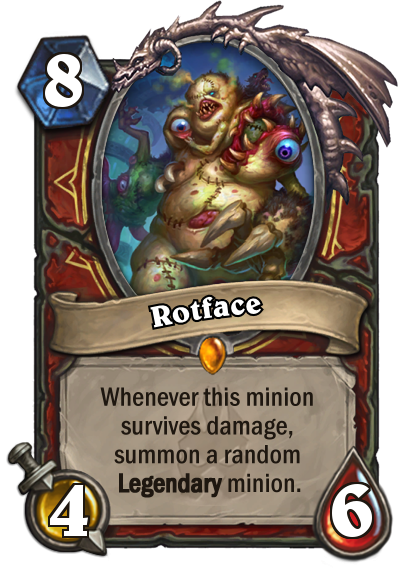 Above: What a cutie.

Warrior is getting a lot of new cards that deal 1 damage to all minions, like Blood Razor and Animated Berserker. Even the Warrior Death Knight‘s Hero Power has that whirlwind effect. Using that with Rotface could help you fill your board with Legendary minions.

Sure, it’s a risky card. Not all Legendaries are great, after all. But you could highroll an Arthas or Ysera, which just might secure yourself a win.