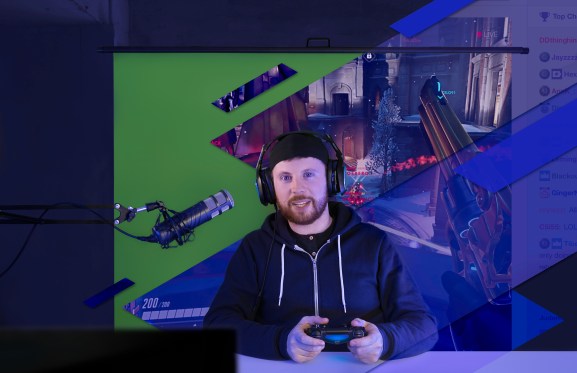 Elgato's Green Screen in the works.

Elgato sells one of the top affordable cards for capturing gameplay video, and now it is filling out its product lineup with more tools for Twitch broadcasters and YouTube creators. The company revealed its Cam Link and Green Screen accessories today. The $129 Cam Link enables you to use any camera with HDMI out as a webcam on your computer. The $149 Green Screen is a collapsible, easy-to-store filming backdrop that enables gamers to put just themselves over a game without having their office or bedroom behind them.

Elgato is aiming these products at broadcasters, whether they are full-time or just hobbyists. The gaming audience has embraced livestreaming, and it’s a consumer base that typically has cash to spend. Elgato built a strong reputation with its HD60 capture cards, which easily handle recording gameplay at 1080p and 60 frames per second. Now, the company is looking to maximize its revenues by giving its customers more products to improve the production of their broadcasts.

“A high-quality camera is a critical upgrade to any creator’s setup, but often comes at the cost of a complicated and cumbersome video workflow,” Elgato Gaming general manager Julian Fest said in a statement. “The arrival of Cam Link and Green Screen will kick off a new era of higher-quality visuals on YouTube, Twitch, and other platforms. These products will help content creators stand out by allowing them to experiment with creative production elements like chroma keying, wide angle and closeup shots, depth of field, and more.”

I’ve tested the Cam Link, and it works as intended. Of course, it isn’t ideal for every camera. For example, many DSLRs don’t do well with long video-recording sessions due to overheating visual sensors. My Canon T4i shuts down automatically after 30 minutes. On top of that, my T4i outputs a video signal that includes the camera’s menu overlay. There are ways to deal with those issues on certain makes and models using custom firmware (like the popular Magic Lantern tools) — although my T4i must not have an option for a clean output, according to most message boards.

Still, Elgato is giving broadcasters an option to upgrade over the popular Logitech C920 or C922x webcams without having to spend thousands of dollars or a lot of time tinkering with your setup.

As for the green screen, content creators have plenty of options on the market for this kind of thing. But Elgato has definitely built this one with livestreamers in mind. The screen retracts into its own carrying case that also serves as its stand, and that might make it attractive to folks who are playing games out of a smaller bedroom or office.

On top of the Stream Deck, which is a tiny command station for broadcasters, Elgato is leading the trend toward better-looking player-created content. While Twitch and YouTube have long thrived on cheap, home-made videos, that could change as access to professional (or at least prosumer) tools become more accessible and affordable as well as built with gamers in mind.