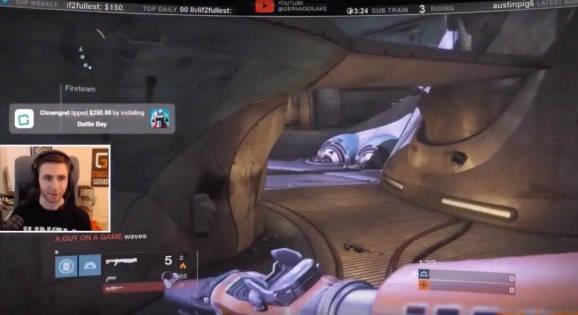 GawkBox has raised $3.7 million to enable a new form of tipping for streamers. It enables fans to tip livestreamers by getting the fan to download a sponsored mobile app and engage with the app for a certain amount of time.

It’s part of what you might call the tipping economy, which has enabled livestreamers to make a lot of money playing games and streaming other content. On Twitch and with services like Streamlabs, streamers can reap a lot of revenue through tips.

But not every fan can offer real money as tips. For the fans who have the time, GawkBox enables an alternative. About 20,000 streamers have already signed up to use Seattle-based GawkBox’s platform. For a streamer who has 100 concurrent fans watching at any given moment, the streamer can make an estimated $100 per hour. That’s not a bad chunk of change from fans who might not otherwise produce any revenue for the streamer.

Asked if there is a lot of friction in this process, Chris Brownridge, cofounder and CEO, in an email, “Fans are extremely willing to do this. It’s already successful and working today. Streamers are earning around $100 per hour per 100 concurrent viewers. Most fans consume content on desktop or connected TV. Our platform is operating as a second screen experience.”

The whole system shows the value that streamers are producing for brands. In 2016, cash tipping emerged as a way to grow income for livestreamers on Twitch and YouTube. GawkBox opens the way to “sponsored tipping.” Fans can tip using their available time, with the streamer getting paid if the fan downloads an app and reaches a milestone like leveling up a character or completing an in-app challenge. Once the task is complete, the app developer or other advertiser will pay the streamer.

Madrona Venture Group led the round, with follow-on participation from London Venture Partners and Erlend Christofferson, former chief marketing officer at Supercell. Previously, Jonathan Zweig, cofounder of AdColony and AppOnBoard, invested in an earlier round.

“Live streaming is a massive, rapidly-growing market, but no one has solved the problem of how to monetize live content. The GawkBox team has created a unique solution that is a win-win-win for all parties — streamers earn more income, fans get to support their favorite streamers in new ways, and advertisers have a new way to drive engagement in their apps,” said Daniel Li, senior associate at the Madrona Venture Group, in a statement. “The team understands this market deeply and has built an experience that is clearly resonating with their users — we are excited to back this team and work with them to grow this market.”

Streamers can sign up at GawkBox.com and display a GawkBox overlay on their Twitch and/or YouTube stream. Fans who want to make a sponsored tip click on a content creator’s GawkBox profile and then download apps or games of their choice. As they play the games or interact with the apps, various milestones correspond to tips that go to the streamer. App developers can use GawkBox to get to a hard-to-reach audience with an entirely unique and measurable approach.

“Before GawkBox, monetization options were very limited for content creators. In just a few weeks, we can double the income of many of our streamers,” said Andrew Allison, chief revenue officer and cofounder, in a statement. “App developers who want to drive more than just downloads are seeing high engagement levels, while also being able to access a highly-engaged user base on a performance advertising basis.”

The company’s cofounders — Brownridge, Allison, and chief technology officer Tony Chong — have roots in mobile advertising and were part of the early team at mobile video ad firm Vungle.

Brownridge said that streamers can double their platform income in the space of a couple of weeks.

He said, “Ripped Robby made more money from GawkBox than on YouTube in his first full active month. The app developers pay the tip on the fan’s behalf as an acquisition fee for that fan downloading and using the app. Tip amounts are dynamic according to what app developers want to pay per action.”

Tip amounts vary from 50 cents for a download to as much as $250 for achieving a deep level in a game.