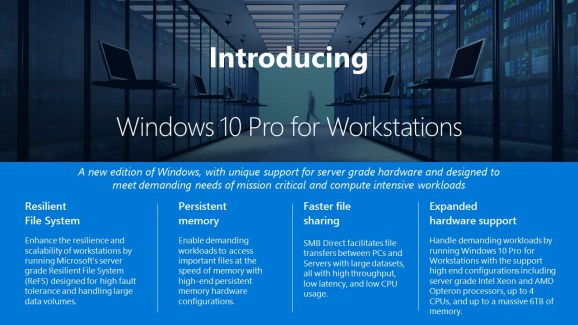 If you thought Windows 10 had too many editions, Microsoft isn’t listening. The company today unveiled Windows 10 Pro for Workstations, a high-end edition of Windows 10 Pro with support for server grade PC hardware that will ship as part of the upcoming Windows 10 Fall Creators Update slated to arrive this fall (likely in September).

Windows 10 Pro for Workstations is designed for mission critical and compute intensive workloads. Microsoft says it listened to feedback from the Windows Insider Program to meet the needs of advanced users and power users with Workstation PCs.

Windows 10 Pro for Workstations is all about performance and reliability. In particular, the new edition is able to use recent architectural changes in the Windows kernel to take full advantage of high-end processor families, such as Intel Xeon or AMD Opteron, that package a high number of cores in single or multi-processor configurations.

Back in May 2015, Microsoft announced that Windows 10 would have seven editions. That number has now ballooned to 12:

For the sake of comparison, Windows 7 had six editions and Windows 8 had four. Both also had special regional editions.