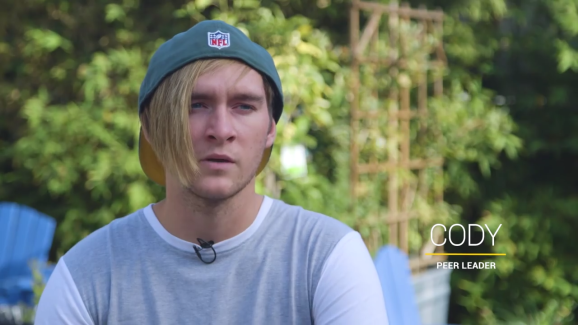 Cody is one of a handful of homeless youth in Los Angeles identified as peer leaders by the HEAL algorithm.

Making AI models at the University of Southern California (USC) Center for AI in Society does not involve a clean, sorted dataset. Sometimes it means interviewing homeless youth in Los Angeles to map human social networks. Sometimes it involves going to Uganda for better conservation of endangered species.

“With AI, we are able to reach 70 percent of the youth population in the pilot, compared to about 25 percent in the standard techniques. So AI algorithms are able to reach far more youth in terms of spreading HIV information compared to traditional methods,” said Milind Tambe, a professor at the USC Viterbi School of Engineering and cofounder of the Center for AI in Society. “If I were doing AI normally I might get data from the outside and I would analyze the data, produce algorithms, and so forth, but I wouldn’t go to a homeless shelter.”

The pilot project will next be expanding to serve 1,000 youth. Other projects currently being taken on by the Center for AI in Society include gang prevention, wildlife conservation with computer vision, and predictive models to improve cybersecurity, prevent suicide, and help homeless youth find housing.

The center has also developed and deployed algorithms for federal agencies such as the U.S. Coast Guard, Air Marshals Service, and Transportation and Security Administration (TSA).

Tambe was one a handful of authors of a forward-looking report that examines how AI will evolve and affect business, government, and society between the present and 2030. Commissioned by Stanford University as part of The AI 100 Project, the study found that AI aimed at solving social problems has traditionally lacked investment because it produces no profitable commercial applications. The report prescribes making AI for low resource projects a higher priority and offering AI researchers incentives, but Tambe also believes an entirely new discipline may need to be developed.

“[These projects] bring up completely new kinds of AI problems because working with low resource communities, data is sparse, as opposed to being plentiful. When you talk about big data, that’s not what we’re doing here. Whether it’s wildlife conservation or working with homeless youth, we’re talking … incomplete data and there’s no capacity to actually produce that massive clean big data that you can do deep learning on,” he said.

“We’re trying to develop novel AI science as well as novel social science,” co-director Eric Rice told VentureBeat in a phone interview. “We’re not just trying to be data scientists who take advantage of publicly available datasets or social scientists that take advantage of out-of-the-box machine learning tools that are pretty much readily available through canned software packages. What we’re really trying to build is new science on both sides.”

The USC Center for AI in Society is a collaboration between computer science and social science schools at USC, an ambitious initiative created to cross-pollinate ideas between the two disciplines in order to solve some of the world’s biggest problems.

Created in 2013, the program focuses on problems found in the 12 Grand Challenges of social work and the United Nations’ Sustainable Development Goals.

The Sustainable Development Goals were adopted by U.N. member nations in 2015 and focus on implementing measures to address priorities — like access to quality education, gender equity, and the end of poverty and hunger — by 2030.

“This is the first collaboration as far as we are aware between AI and social work in a center. So we’re really collaborating across schools in terms of engineering and AI and social work, and it’s bringing up completely new sets of challenges to the core in terms of problems that the AI community has tackled,” Tambe told VentureBeat in a phone interview. “Spreading HIV information amongst homeless youth or trying to reduce substance abuse or matching homeless youth to homes, these are challenges that generally have not been tackled within the AI community.”

The two schools work together because sometimes an AI data scientist may not understand a social issue if they don’t see it emerge in a dataset, and social workers may sometimes fail to understand that an algorithm could significantly impact a social issue.

While there was some initial difficulty in understanding the different vocabularies social scientists and data scientists use, the collaboration “leads to completely new kinds of discovery that wouldn’t have been possible if either of us were working alone,” Tambe said.

“Social work tends to be less precise and engineering is very focused, so there’s this dance we’re in,” Rice said. “We’re adding more muddiness to the model and they’re insisting that we are more crisp in our argument, so there’s a nice generative aspect to that kind of back and forth.”