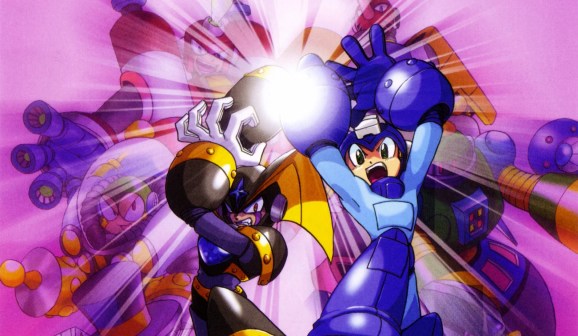 I sure would like to play this on my PS4.

Mega Man Legacy Collection 2 has just come out for the PC, PlayStation 4, and Xbox One. It contains Mega Man 7 through 10. Combined with the first Legacy Collection (which hold the first six Mega Man games), having both should give you a complete collection of the classic series, right?

And I’m not talking about the spinoff series, like Mega Man X or Mega Man Legends. Those evolved into their own franchises that stand desperate from the original Mega Man line (it’s like the difference between Donkey Kong Country compared to Super Mario Kart). Even in the classic franchise, Capcom has released some great (or, at the very least, interesting) games featuring the original incarnation of the Blue Bomber. Sadly, none of these made it into the recent collections, and they’re probably too obscure to justify their own bundle.

But we’re going to go ahead and give them the love that Capcom won’t. We’re going to talk about the five (well, six, kind of) biggest omissions from the Mega Man Legacy Collections.

The absence of Mega Man & Bass hurts the most. Although it doesn’t have a fancy number in its title, it’s a full-blown 2D Mega Man that came out shortly after No. 8. Of course, it had a lot going against it. Although Mega Man 8 was a PlayStation game, this entry went back to the aging Super Nintendo. It also didn’t originally see a release outside of Japan. We didn’t get to play it until a Game Boy Advance port in 2003.

Many fans consider this the franchise’s ninth installment long before Mega Man 9’s release in 2008. It’s a great platformer that introduces Mega Man’s rival Bass as a playable character, who differs from Mega Man by being able to double-jump and shooting in multiple directions. Bass first showed up in Mega Man 7 as a seeming ally, but the game later revealed him as another creation of Dr. Wily, the series’ iconic villain (although he will rebel against Wily).

I can understand why some of the following games on this list aren’t in the Legacy Collections, but Mega Man & Bass’s omission is a big disappointment.

That’s right, the Sega Genesis has its own Mega Man game! The Wily Wars contained 16-bit remakes of the first three titles in the series. But after beating all three, you unlock a new campaign that features bosses based on the famous Journey to the West story.

Sadly, this is another game that’s almost impossible for U.S. Mega Man fans to play legally. It was never available at retail. Instead, you can only play it if you subscribed to Sega’s expensive and cumbersome Sega Channel service, a very early form of digital game delivery.

The Legacy Collections would have been a great opportunity to finally make Wily Wars available to those outside the emulation scene.

Along with your traditional soccer skills, each character has a special skill. Bubble Man, for example, would surround the ball with a bubble, which would then transfer to any opposing player it, sending them flying into the air. Bomb Man, meanwhile, would turn the ball into an explosive that would knock out another player on contact.

It’s a bunch of goofy fun, and I would have loved to have it on a modern system.

I’m still bitter about this one. It never saw a release in the U.S., but Capcom was planning to bring it here at some point. I vividly remember seeing ads for the racer in the back of my gaming magazines, filling me with excitement. But it never came.

Battle & Chase eventually made it over to the U.S. as an unlockable in the Mega Man X Anniversary Collection that came out for PlayStation 2 and GameCube in 2006. Hey, making an obscure title in the series a bonus for a collection? What a novel idea! I wish that the Legacy Collections would have thought of that.

The Power Battle, along with its sequel (1996’s The Power Fighters), are action-packed. They’re like playing a traditional Mega Man game but only with the bosses, and it featured cooperative action. So you and a friend could go up against waves of robot masters together, choosing to take control of characters like Mega Man, Proto Man, and Bass.

The games are simple, but the arcade-like action is fun, and it’s a rare cooperative experience for the series. Both were included in the 2004 Mega Man Anniversary Collection, once again showing how those older bundles were willing to pack in more value.