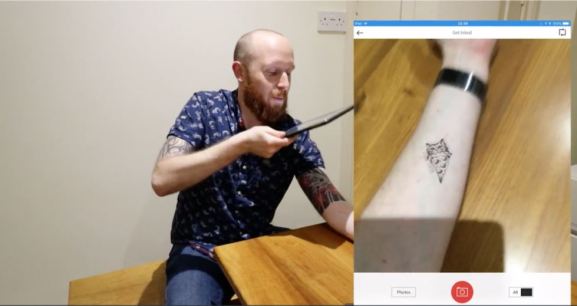 Fishbowl is now testing AR along with VR.

Virtual reality consultancy and testing firm Fishbowl has told UploadVR they have expanded their services to include augmented reality testing. The company produced their first AR usability test with Inkhunter, an application that allows users to see how a tattoo might look on their body before actually putting ink to skin. Describing the reason behind the expansion, CEO Geoff Skow highlighted the difficulties inherent in AR development, “There’s a huge gap between getting an AR app to work in staged environments and having it work for regular users in a real-life setting. Because everyone’s environment is necessarily unique (lighting conditions, surfaces, phone processors, a million other things) it’s absolutely critical for developers to test in as many different settings as possible.”

Skow said Apple’s new augmented reality SDK, ARKit, has triggered a stampede of developers clamoring to make their mark. With a standard SDK to work from, AR developers can now focus on big ideas instead of getting bogged down in minutia like camera calibration. Any would-be app maker can now tackle augmented reality with minimal overhead.

Despite the current boom, Skow says other testing firms are lacking in solutions designed for augmented reality creators. “Unfortunately for developers, the giant incumbents in the crowdsourced mobile user testing space have built solutions for a tap-first world. They can show you where people are tapping when using your app, and even have them think aloud so you better understand their mindset. … But that doesn’t cut it for immersive AR applications, because you’re missing the view of the environment the user actions are taking place in. You’re missing the context. ”

Skow says filming testers can help reach a more complete understanding of the user experience. “We’ve built up a remote testing panel of more than 1,0000 VR/AR enthusiasts across more than 600 cities around the globe. These testers have recorded more than 5,000 hours of split-screen playtests, which developers use to see both what the user is looking at and what they’re doing in real life. This helps them understand where and when users are encountering usability or performance issues.”

ARKit is barely over a month old, and no ARKit applications will hit the app store until IOS11 drops later this year, but Fishbowl is betting big on an augmented reality gold-rush when iPhone owners finally get their hands on ARKit developed apps.