The mobile game market is more competitive than ever — an average of 792 games are submitted to the iTunes App Store each day. Mobile game makers need a plan stronger than “hope.” At TreasureHunt, our Berlin-based interactive entertainment company, we focused heavily on pre-production surveys, integrated marketing with production from the get-go, and optimized slowly to find the sweet spot for our new game Pet Paradise, a bubble shooter mobile game featuring a pet collecting and island discovery meta-game. The results have been remarkable.

We created a game that our target audience wanted, but was not yet available. Essentially, we found a niche with no competition and big reach potential. Launched last month, and featured on both the Apple and Android App Stores, we’ve reached an over 2 percent click through rate with an overall average click to install rate of 68 percent across all social media, a day one retention rate of over 50 percent across all installs, platforms and marketing channels, and enviable engagement rates. Here’s how we did it.

Before we even started designing Pet Paradise, we had a hypothesis that the bubble shooter (like Puzzle Bobble) audience and the match-3 audience overlapped. We surveyed audiences interested in both bubble shooters and casual meta-games in order to make sure we were building a game that was both desired and unique. After all, innovation is useless if no one actually wants it. Our hypothesis was demonstrated correct by our research, so we built a unique meta-game, which was not currently offered with other bubble shooters. We believe that combined with our high production value and art style set Pet Paradise apart from other games on the market.

Integrating marketing with production since day one

We integrated marketing with production since day one of making Pet Paradise, so that we have been able to not only optimize targeted marketing, but also the early game metrics resulting from optimizing the game for that target group. We started by running three vastly different types of bubble shooter ads to players of both bubble shooters and match-3 games, and based on click and conversion data, we were able to accurately chose a game direction that would resonate with players.

Since each ad dealt with a different unique selling proposition, it allowed us to be more flexible in terms of marketing. For instance, if a bigger studio bought up all the ad space in the bubble genre, we were able to run ads that focused more on the pet collection aspect of our game.

Although it sounds like a no-brainer, our high production values are key to our success. Whether you make shoes, chairs or games people want nice looking things, especially if they go to your product to be entertained. Spend the time on this and you’ll be rewarded. While you won’t make additional revenue from a good looking game, you’ll save on marketing costs and people will be more inclined to stick around because quality creates trust. As our game is based on an adorable collection of 82 animals (and more planned) it was important for us to nail our characters. We quickly found that our audience preferred more rounded and simple animals animals as they provided more of a huggable feel, and that we could keep the animals’ bodies universal and focus on the snouts and tails for maximum impact.

Gender was another focus when developing our art. Typically, men make up only 20 percent of the bubble shooter audience. We wanted to create a game that was more accessible to both genders and didn’t fall into the pink princess stereotype. Our gender split is now 30 percent men and 70 percent women. 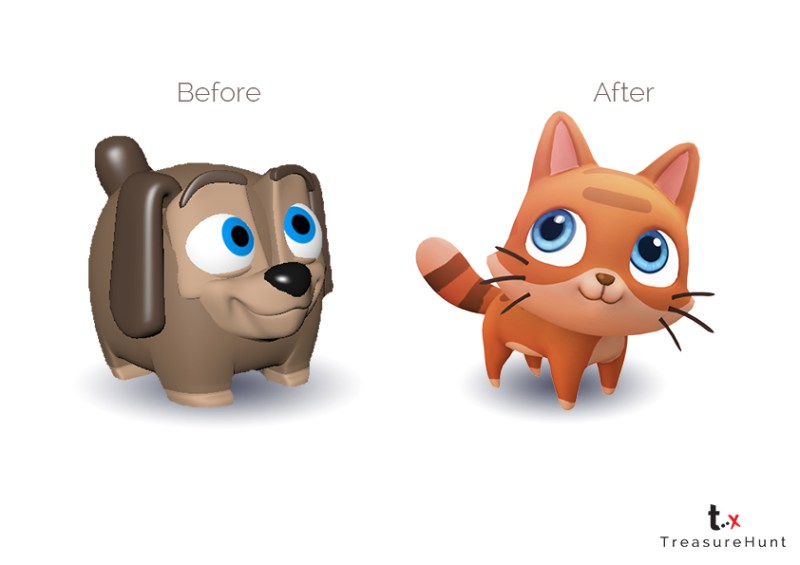 Above: The art style of Pet Paradise

We took a considerable amount of time during soft launch to identify and build personas that would work well on a global scale, and our Media Services teams focused on what worked and what didn’t in other bubble shooter marketing campaigns. When testing our visual ad formats we were surprised to learn our audience didn’t respond to us pushing the meta-game in our ads. Our audience shows up for the Bubble Shooter, but stay for the pets and islands which reflects the strong retention we’re seeing due to the meta-game. 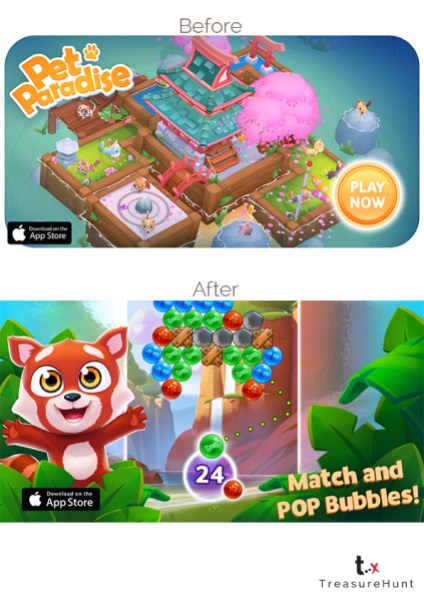 Playtesting was also a critical part of our development process, as key performance indicators can only tell you so much. By working with PlaytestCloud, we were able to get invaluable feedback, like discovering that the close buttons on our pop-ups needed to be bigger because a lot of our users have longer nails. You can’t find out meaningful insights like that from just data.

We’re off to a good start with Pet Paradise, and we’re excited about the road ahead. We’ve learned sticking to the basics is critical: give people something they want, but don’t yet have. Build, measure, and learn has been a winning strategy in developing a successful mobile game.

Kyle Smith is the co-founder and CEO of TreasureHunt, a Berlin-based interactive entertainment company.
Register for GamesBeat's upcoming event: Driving Game Growth & Into the Metaverse