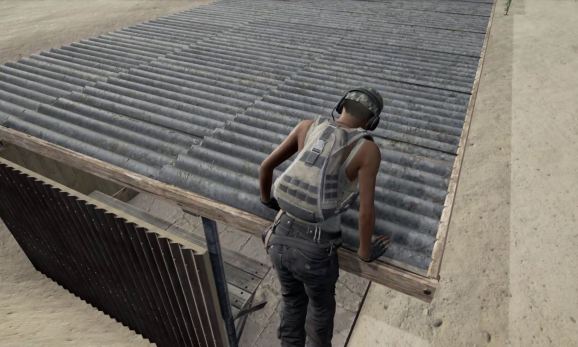 Get up on that roof!

Climbing and jumping over obstacles in PlayerUnknown’s Battlegrounds is a pain in the ass right now, and that’s what most players are accustomed to. So with developer Bluehole demonstrating vaulting and climbing over fences and onto roofs, the millions of people who regularly boot up the last-person-standing shooter better get ready to change their strategies — especially in time for our Games Industry Family Chicken Dinner Tournaments.

During the PC Gaming show at E3 (the Electronic Entertainment Expo industry show and now fan event) in Los Angeles this past June, Bluehole revealed that it is bringing mantling (the term game designers use for jumping over walls while) into Battlegrounds. This will remove janky interactions where players have to struggle to jump, crouch, and move forward in quick succession to climb through an obstacle such as a window. Instead, your character will hop over most objects and walls with ease and fluidity. You can see a work-in-progress video that Bluehole released yesterday below — and if you’ve spent any time with Battlegrounds, you’ll recognize this is a huge change.

I’m excited about these new animations and movement options. I remember how amazing it felt to hurdle a fence with ease in a game like 2007’s Call of Duty 4: Modern Warfare. Hell, I want to pick up that game right this second just to feel that satisfying movement again. Hopefully, Battlegrounds will come close to nailing a similar sensation.

At the same time, better jumping and climbing will destroy a lot of habits many players have learned in their dozens or (lemme check my Steam hour counter … oh, god!) 220 hours with Battlegrounds. Let’s just consider a 1-on-1 fight with the combatants on either side of a fence. As of today, this fight usually has players either trying to wait for the other to peak out or trying to rush around a gap in the barrier. Sure, many expert killers tend to jump up and shoot over walls and fences, but that’s difficult and unreliable because guns behave unpredictably when you are close to physical geometry.

But most fights at a fence or even at a building are going to involve someone rushing or someone camping and waiting for the other person to sprint through a handful of possible access points.

After this update, if you go prone and hug a wall and try to wait out your opponent, you are going to have to deal with the possibility that they are going to mantle right on top of you and shoot you from behind. Houses that previously only had one or two entrances may now enable people to get in through the windows or even through a second floor balcony or the roof.

Above: PlayerUnknown’s Battlegrounds mantling is going to change everything.

The current meta, the collective understanding of how to best play the game, will crumble due to this change — but that’s fine.

Think about the camper in the house or on a roof. If you are outside and decide to go after them, you should have to take some risk. You’re attacking a fortified position. But as it is, the risk is maybe too high. A single person could watch all of the entrances, and they don’t have to worry about a third person showing up to a fight and shooting them from behind as long as they avoid windows.

Mantling multiplies the danger so that the person camping has to concern themselves with more vectors of attack while still dealing with less risk overall than someone exposed outside.

Put another way, vaulting favors action and movement. Although, I doubt any change to the meta will lead to me finding fewer people hiding in bathtubs.