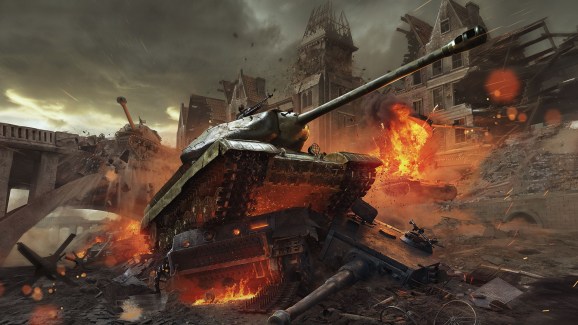 World of Tanks is rolling out on your newsfeed. Wargaming is partnering with Facebook to stream over 1,000 hours of video centered on its popular take on online shooters. In addition to livestreams of gameplay, this deal includes historical content, interviews with players, and coverage of esports events, such as the World of Tanks regional and final tournaments.

Leo Olebe, director of global games partnerships at Facebook, says that online games like World of Tanks also attract a lot of engagement from fans on social media. Though it might seem like a niche game, it has a huge following — last year, around 140 million players all over the world were playing it on PC, Xbox One, and PlayStation 4.

“There’s a few factors that make Wargaming a really good fit for the gaming video ecosystem we’re trying to build on Facebook,” said Leo Olebe in an email. “First, it always comes down to the fans — Wargaming’s community is truly global with a large contingent coming from Europe, and that connects really well to the global audience of gamers we have on Facebook.”

Another factor, according to Olebe, is Wargaming’s existing efforts to engage fans through video. The developer is already active on the popular livestreaming platform Twitch, where it has over 65,000 followers. Its YouTube series Inside the Chieftain’s Hatch stars its director of militeria relations Nicholas Moran, who explains the engineering of actual tanks. Wargaming prides itself on the historical accuracy in World of Tanks, and it seems that its fans are equally enthusiastic.

Gaming-related videos are slated to generate $4.6 billion this year with an audience of 665 million. Facebook has been courting these viewers with its latest initiatives, teaming up with ESL to livestream esports events. And its partnership with Blizzard Entertainment enabled players stream games like Overwatch directly from the Battle.net online platform.

“We’ve seen a really strong response across the board from viewers of gaming video, and it spans a wide range of content from live to on-demand,” said Olebe. “While our initial results are encouraging, [we’re in the] early days for us on the gaming-video front. We are always looking to learn and try new things and team up with partners that take a similar philosophy.”