Streaming and esports have been intertwined through their history. As the esports industry evolves to more resemble traditional sports, companies are starting to invest in exclusive streaming partnerships. These days, it’s becoming common to see certain events on specific platforms, such as the Capcom Pro Tour streamed exclusively on Twitch.  Last week, Disney put their foot to the pedal with another $1.58 billion investment into BAMTech, MLB’s streaming service that has a stake in Riot Games. Disney says that we can expect to see an ESPN-branded multi-sport streaming service by 2018. Let’s take a look at what arrangements Disney, Blizzard, and Stream.Me have made that’s changing the esports viewing experience.

Riot Games announced last year that it was joining up with BAMTech to help monetize League of Legends, one of the most popular esports titles in the world. According to Disney-owned ESPN, the $300 million investment would give BAMTech streaming rights through 2023, and they’d be able to distribute to platforms such as Twitch and YouTube. At that point, Disney already owned 33 percent of BAMTech with a $1 billion investment. With last week’s money thrown in the pot, they’re not the majority owners with a 42 percent stake.

That BAMTech is already invested in League of Legends has esports fans intrigued. Given BAMTech’s association with Riot and ESPN’s continued interest in esports, it’s very likely that we’ll see esports included in the streaming package mentioned above. Street Fighter and Smash Bros. have already been featured on both ESPN and Disney XD, so the streaming of major esports tournaments seems like a natural progression.

When it comes to popular competitive gaming titles, Blizzard games are at or near the top of many people’s lists. Going back to the Brood War days at KeSPA (Korean Esports Association), fans have gotten to know powerhouse esports organizations and esports superstars, such as Lim “BoxeR” Yo-hwan, through Blizzard titles. In June, Blizzard gave Twitch the rights to broadcast 20 esports events, further solidifying the Irvine-based developer as a serious player in the esports world. Through 2018, Twitch will host Overwatch, Hearthstone, World of Warcraft, Heroes of the Storm, and Starcraft II tournaments, giving thousands of esports fans a quality viewing experience.

Though League of Legends, DOTA 2, and Counter-Strike: Global Offensive still pull in the biggest esports audiences, Overwatch is performing quite well. According to EsportsCharts, the Katowice qualifiers for the Overwatch World Cup 2017 peaked at 122,789 viewers for the South Korea vs. Russia match. If production value and quality of talent at events continue to improve, viewer numbers for Overwatch League should also see an increase.

Deals between huge organizations are important, but individual esports organizations are also working to develop relationships with streaming services. Recently, Circa Esports earned the sponsorship of Texas-based streaming service, Stream.Me. Circa is home to some of the best fighting game talent in the world, including versatile Street Fighter expert, Long “LPN” Nguyen, and CEO 2017 Killer Instinct champion, Nicholas “Nicky Lovene. Circa’s competitors use Stream.Me for their streaming sessions, and the Stream.Me logo is now on their jerseys that they take into competition. 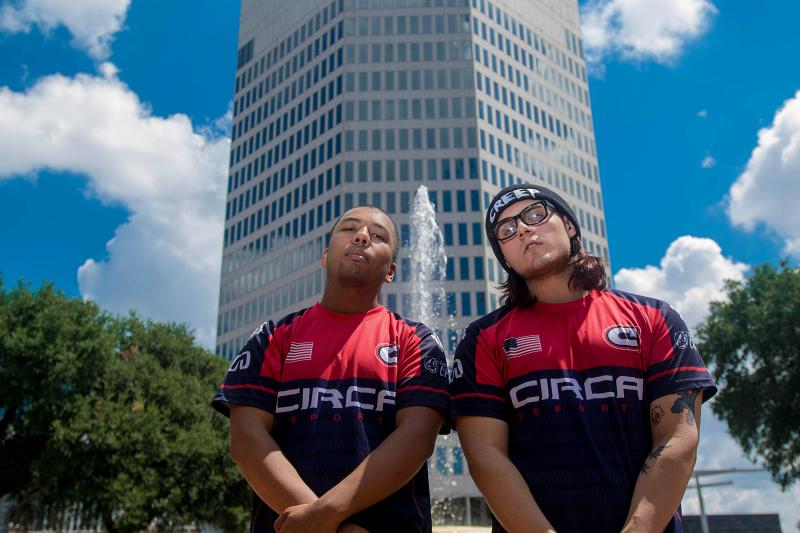 Above: LPN and Nicky in their Circa Esports jerseys

“Stream.Me is one of the best partnerships I’ve ever been a part of,” says Hunter Specht, General Manager for Circa Esports. “They provided a platform for us to build a content team on and that really helped us out. I look forward to keeping this partnership strong and represent them to our full ability.”

The partnership is mutually beneficial.  “Working with a team like Circa Esports, or individual competitors like Carl ‘Perfect Legend’ White and Hoa ‘Anakin’ Luu, provides tremendous exposure for us,” says Chris Aguilar from the Stream.Me team. “They’re not only creating content for our platform, but are featured elsewhere, which provides a wonderful opportunity for Stream.Me to reach new audiences.”

Stream.Me is a small platform in comparison to something like Twitch, but it has grown in popularity over the last year or so. They’re the preferred streaming platform of NetherRealm Studios, the company that brought us Mortal Kombat X and Injustice 2. Their most recent Injustice 2 tournament, War of the Gods, was a huge success.

“The first broadcast was our most viewed NetherRealm stream ever and allowed Stream.Me to forge relationships with the ESL and cross-promote with GameStop’s Hometown Heroes tournament circuit,” Aguilar says. “The quality of the production and our fantastic community has really legitimized us as a platform and place to host tournaments. NetherRealm fans have shown Stream.Me a lot of love, and that’s given us the chance to work cooperatively with other groups and organizers in the same space on different platforms. They acknowledge Stream.Me as a true force in the NetherRealm community for creating successful, high-quality online tournaments.”

The relationship between esports and streaming services will continue to blossom for the foreseeable future. With platforms like Stream.Me and Twitch, fans can use any computer or mobile device to stream gaming tournaments or watch their favorite esports star practice. Fans, players, and events have never been as connected as they are today, and that’s one of the biggest strengths of the esports industry as it continues to develop.

“Esports are obviously exploding in popularity, and Stream.Me is in a position to help esports organizations grow, both in terms of popularity and revenue generation,” Aguilar says. “We can provide them an avenue to achieve their goals while they deliver a daily source of content for our platform and represent our brand at events.”

Indeed, the relationship between streaming and esports is evolving. Gone are the days of casual, social streaming on Justin.tv. Today, professional gamers, esports teams, and companies looking to get a foothold in the esports world use streaming to help build their brands and bring steady, exciting content to their viewers. Perhaps we’ll see even more changes next year when Overwatch League’s geolocation-focused model is tested for the first time.