Ubisoft’s Far Cry 5 demo at Gamescom took me through the Falls End demo that it showed at the Electronic Entertainment Expo (E3). But this time I was able to capture video from the demo so you can see how it looks.

Far Cry 5 is one of the games that will make us all uncomfortable in the post-Trump America. Like Wolfenstein II: The New Colossus, it looks at extremism becoming the norm in the U.S., and it shows what it’s like to resist when you are the underdog. On my second look at this game, it played better.

At Falls End, you encounter a small town that has been taken over by cultists who are spreading through a fictional Montana region called Hope County. At the outset, I got to choose a “gun for hire” to help me with the task of cleaning out the fanatics. I chose the dog, Boomer, who could tie down and even take out a number of the them while I fired away with my guns.

I could have gone in silently, but I decided I had no patience for that. So I went in with guns blazing. Soon enough, I had more than I could handle. It took a few tries before I was able to take out everyone, since the extremists called in reinforcements.

After I finally beat them, I went into the Spread Eagle bar and met the owner, Mary. She admired my knack for taking out the cult members, and she suggested I head over to Nick Rye’s place.

I got in a pickup and drove past some hostiles and over to Rye’s place. I drove right into some enemies, and Boomer jumped out and went to work. It didn’t take long at all to take out the enemies.

Nick thanked me, and he sent me up in his plane to drop some bombs on some stockpiles of the cult’s bomb materials. I did that, and then jumped into an aerial dogfight with another plane. Luckily, I had both a machine gun and rockets on my plane. 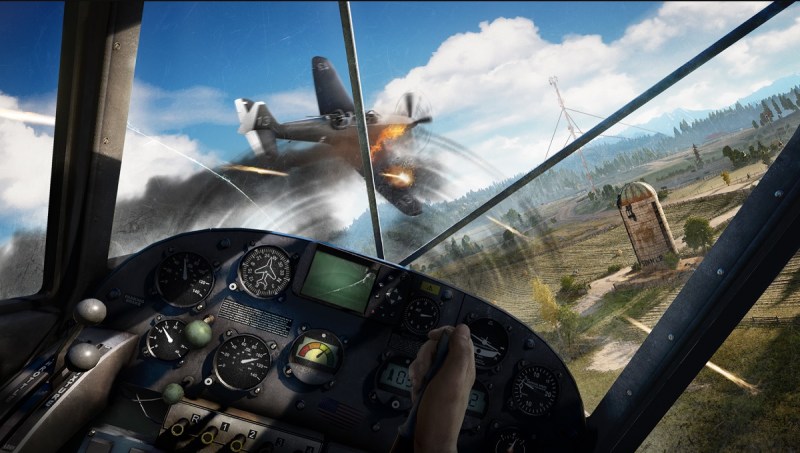 I learned how to fly better since my first attempt at E3. It helped to slow the plane down so I could match the speed of the other plane and stay on its tail longer. Even though I was using a game controller, I found it was easy to fly this time.

The game played faster than during the previous preview, which was good. Ubisoft still has a long time to optimize the game, as it doesn’t come out until February 27, 2018. This demo was definitely an improvement on my experience from just a couple of months ago.