Though I’ve heard about Sega’s Yakuza series, I’d never played any of them. All I really knew about Yakuza Kiwami was that it’s a remake of the first game in the series, a kind of director’s cut edition with 30 minutes of additional cut scenes and a ton of extra side quests and minigames.

I went into it thinking that it would be some kind of Martin Scorsese-esque exploration of the criminal underworld: grim, gritty, and possibly gruesome. And then I discovered that our stoic hero, Kiryu Kazuma, is a gangster with a heart of gold and a love for racing miniature cars.

Kiryu spends most of Yakuza running around and rough-housing in the streets of Kamurocho, a fictional Japanese neighborhood that’s based on the red-light district in Tokyo. I was amazed by how Sega managed to capture and re-create the neon claustrophobia of night life in the city. It reminded me of the time I’ve spent in Seoul, South Korea, and Taipei, Taiwan. Everything from the cramped alleyways to the street hawkers to the quality of light in the early morning felt outstandingly authentic.

Not only does Kamurocho look great, but it also feels like a real city. You can hear the passersby converse as you’re on your way to beat up some hoodlums or to get some steamed buns at the convenience store. If you run into too many people, some of them will start fights with you. Con artists and solicitors will stop Kiryu in his tracks and try to get him to let them read his palm or to come into their bar to have a drink.

Even though the district feels like a sprawling city center, it’s still a manageable size and I had no trouble navigating the map or with getting lost. It helps that each of the different neighborhoods within Kamurocho had different personalities, whether it’s the narrow streets of Champion District versus the modern spacious roads in Theater Square.

I also thought it was a nice touch that when Kiryu’s accompanied by another character, the two of them will have a chat while they stroll. It adds a bit of realism, though that’s probably not a high priority in a game where you can eat a bowl of udon noodles in the middle of a fight to recoup some health. 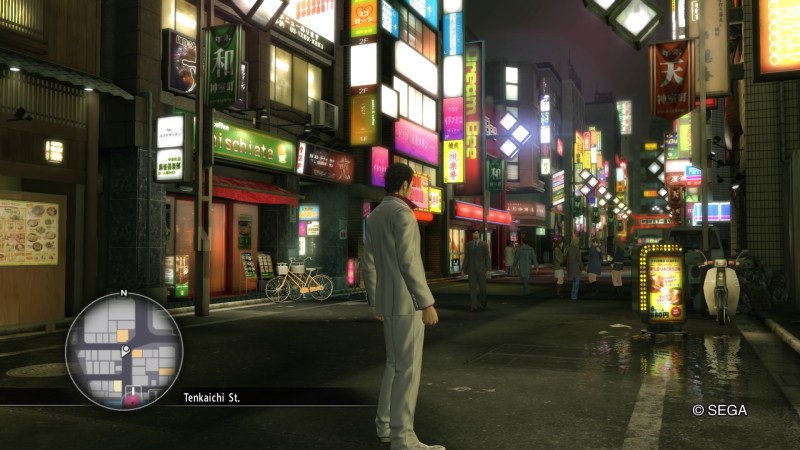 The story’s core is Kiryu’s search for Yumi, his childhood friend and love interest. At the start, she’s kidnapped and Kiryu’s best friend Akira Nishikiyama murders the mob boss who abducted her. Kiryu takes responsibility for it, and after 10 years in the clink, he gets out only to discover that things have gotten complicated while he was gone. Yumi is missing, and the yakuza is in the throes of a violent power struggle after someone stole 10 billion yen of their money and assassinated their head chairman.

While Kiryu’s trying to unravel the mystery of Yumi’s disappearance and how it’s related to the yakuza, he predictably encounters a lot of people who want to kill him or just beat him up. You spend a lot of your time fighting, but for the most part, it stays fun and interesting.

You can switch between four different combat styles — brawler, rush, beast, and dragon — and each feels different. They’re not arbitrary, either; some enemies will require you to adopt the fleet-footed quick jabs of rush mode, while others might force you to pack a bigger punch with beast mode.

If you want, you can also equip melee and range weapons to supplement your martial arts. Sometimes there are objects you can use to clobber your enemies, and if you’re near certain parts of the environment, Kiryu will perform a special finishing move. 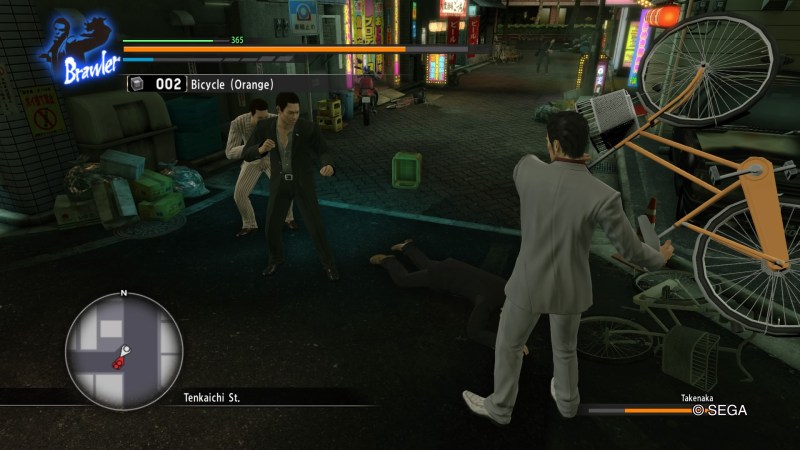 A charmingly cheesy sense of humor

Most of the time, you’ll be punching the daylights out of lowlifes or slamming into people on the sidewalk at breakneck speed while trying to get to a burger joint across town. But when you’re not doing those things, there are a few options for entertainment — such as racing toy cars or taking selfies or playing a weirdly sexualized fighting game featuring women dressed as bugs.

The thing I learned about Kiryu is that the guy is a huge doofus. His trademark one-liner is either “What?” or “Huh?” and he seems to take racing toy cars really seriously. There are also a ton of side quests around town where Kiryu just teaches people after-school life lessons.

He helps a woman sell matchbooks so she can buy a present for her boyfriend. He explains that you can’t judge a book by its cover to some businessman who was scammed by gangsters. He patiently listens as a small child explains the aforementioned weirdly sexualized fighting game with the lady bugs. If Kiryu weren’t deep in the yakuza game with the punching and the stabbing and whatnot, I would want him to start a children’s TV show called Mr. Kazuma’s Neighborhood. I still kinda do. 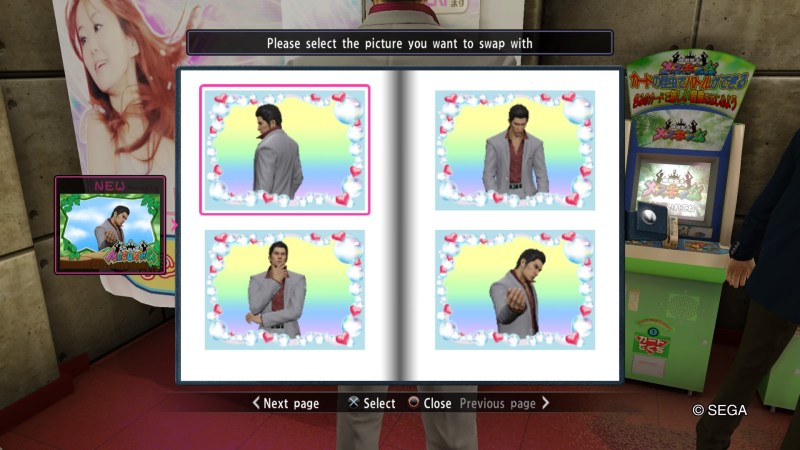 Above: Kiryu has a book of selfies that he carries around with him wherever he goes. #yakuzalife

Can’t a gangster just eat his sashimi in peace? Whenever I was running errands around town, ruffians hounded me. As I mentioned before, combat is pretty fun, and I enjoyed racking up points so I could level up my skills. But once I could defeat the enemies in as little as two minutes, it got kind of old. You can outrun them but sometimes they’re just in the way.

A lot of the side quests also suffer from this. For instance, there’s a whole category of “people trying to scam Kiryu” side quest that often just ends in a fight. These can be a little more fun, because they give you a chance to see parts of the city you might not otherwise, but they’re not terribly interesting.

These random encounters are a minor nitpick since they do have positives. In addition to giving you CP, they’re also a way to earn pocket change. I guess even though Kiryu is generally principled, he thinks that it’s OK to just steal people’s money if they attack him, which (maybe?) seems fair. 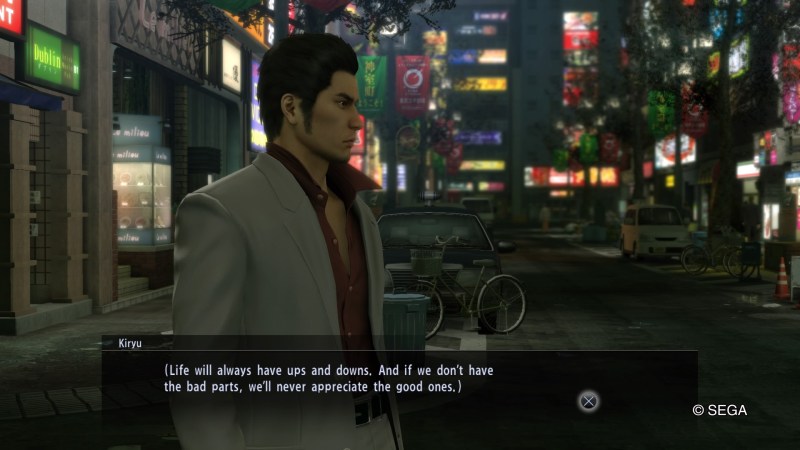 The occasional snag in the user interface

Overall, the controls felt great but there were some occasional wonky camera angles inside certain shops and sometimes during battle. The user interface also had some small quirks that could get irritating over long play sessions. Every time I saved, for instance, it would do it again. It was a small thing, but noticeable and just kind of perplexing.

I found a few other small annoyances like this, such as not being able to auto-sort inventory or not being able to skip dialogue or cut-scenes that you’ve already seen before. Every time you race at Pocket Circuit Stadium, it has a few scenes that you can’t skip; and if you lose a race, you’ll have to fast-forward through the same dialogue each time. 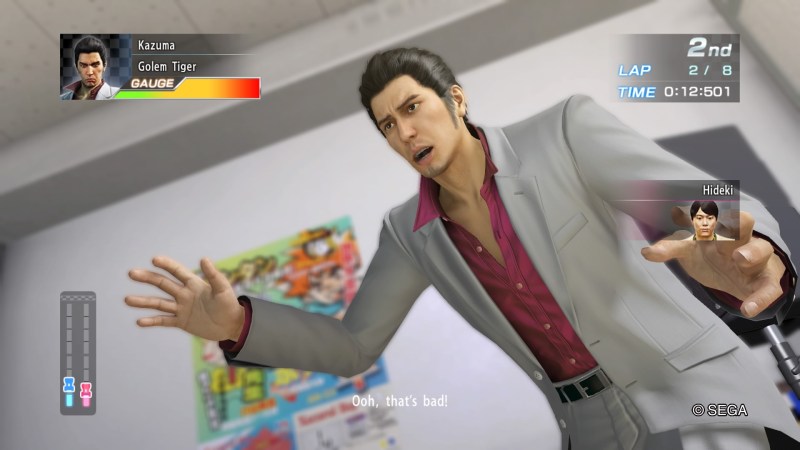 This newcomer to the series thinks that Yakuza Kiwami is a blast. I can’t speak to how different it is from the first game, but the sheer amount of content and personality makes it worth checking out. Though the fights could get repetitive at times, the combat system kept things interesting on the whole.

The story wasn’t edge-of-your-seat kind of material, but there were enough twists and turns to make it feel worthwhile.

Yakuza Kiwami comes out on PlayStation 4 on August 29. Sega sent us a code for this review.