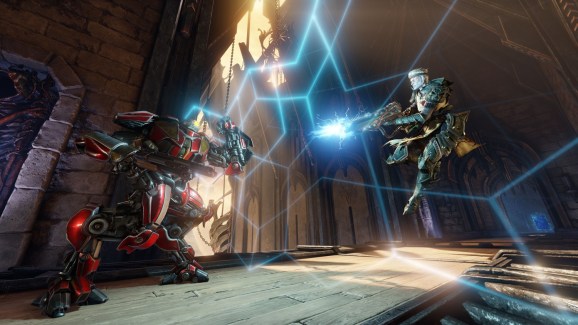 Id Software’s Quake Champions is now available via Early Access on PC. You can play the arena shooter if you’re willing to spend $30.

That’s $10 cheaper than what the $40 premium version of the game will cost when it officially launches (although it will also have a free-to-play version). Early Access means that the title is still in active development. Of course, in this modern age of “games as service” and constant updates, Early Access sometime doesn’t look too different from an “official” release. And buying it will give you access to the final version.

Quake Champions is actually about to enter Early Access as Ark: Survival Evolved, a game that’s been stuck in that phase for years, gets ready for an official release.

Arena shooters focus on fast-paced action. Quake III Arena, which came out in 1999, was one of the first games to popularize the subgenre. But the Qauke series has been on something of a hiatus since 2010’s Quake Live, which itself was just a browser version of Quake III.

Quake Champions is also Id’s followup to last year’s Doom, a remake of the historic first-person shooter that impressed us with its high-octane action. But while Doom had a multiplayer mode, it was its single-player campaign that received most of the praise from fans and critics. Quake Champions is all multiplayer. It will have to compete with other multiplayer shooters, like the recent Lawbreakers (which is in the arena subgenre itself) and hits like Overwatch and Counter-Strike: Global Offensive.

Quake Champions is also preparing for its first major esports event, as Bethesda will host a tournament for the new game at Quakecon 2017. That show takes place from August 22 to August 24 in Dallas, Texas.