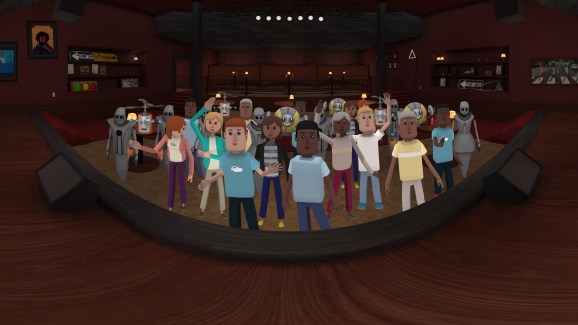 Last month, AltspaceVR, one of the most beloved startups in the burgeoning, albeit struggling, VR consumer industry announced it was shutting its doors due to what they described as “unforeseen financial difficulty”. This is by no means an ordinary player in the VR community. The California-based startup is one of the earliest pioneers in the sector, having raised millions beginning with its seed round back in prehistoric 2014 and, more important, entering the incredibly crucial category of social VR.

There’s not a single person I know in the VR industry who doesn’t nod their heads at the importance of social VR, which may very well end up being the “killer app” experience that establishes mainstream appeal to VR. There are only a handful of others in the space, like Sansar by Linden Lab, High Fidelity, WebVR-based JanusVR, and most recently, Facebook Spaces (more on that in a bit).

It’s social VR that also touches on the underlying vision of immersive computing as the quintessential medium to eventually and inevitably open us up to the Ready Player One sort of “Metaverse” that so many in the industry are deeply invested in seeing created. The building of endlessly expansive virtual worlds is almost literally the holy grail of the industry. So, no wonder that the news of AltspaceVR’s collapse felt like a punch in the stomach!

While others reacted with surprise, disbelief, or disappointment, I felt it was the right timing for the app to fold. In this case, you have a team that’s raised over $15 million and burned it so fast that they apparently didn’t see the end coming. Despite what giddy pundits may report, the consumer-facing VR market is still very much in its hype cycle, and only lean outfits that can go cockroach mode have a chance of surviving the slow growth rate. That doesn’t appear to be AltspaceVR’s M.O. And, as a WebVR evangelist, I just can’t take the long-term prospects of a walled garden approach to social VR very seriously. Only an open approach makes sense.

Well, no matter as last week, which is less than a month after the gloomy announcement, the team at AltspaceVR posted on their blog that “AltspaceVR is back. … We feel confident saying to our community that you don’t need to find another place to meet your friends in virtual reality. AltspaceVR is not closing down. We look forward to seeing what you’ll make next in AltspaceVR.”

While the VR community was thrilled with the seemingly unexpected turnaround, my mind cried “foul!” I can’t help but consider the possibility that the founders, Eric and Gavan, devised the whole thing as a ploy to prod its fandom into a wave of outcry, and so stir a media response that would generate enough positive buzz to sway their VCs to make another cash injection, despite the ominous writing on the wall.

(When contacted for comment, AltspaceVR sent the following statement: “The closing and then (limited) continuation of operations have been real, dramatic, and emotional events for AltspaceVR, and not contrived as you speculate. Our recent communications here and here are accurate representations of the facts and our feelings in the straightforward, open, and honest manner that is fundamental to our relationship with our user and developer communities. We look forward to sharing more information as soon as we can.”)

If you connect the dots of the events leading to it, starting with the anticipated emergence of Facebook Spaces as a direct competitor and, so, no longer an otherwise potential acquirer, and that the company was lumped into a lawsuit one month earlier on patent infringement, the timing of the gambit doesn’t sound so far-fetched. They were seriously against the wall.

“Facebook Spaces, and other competition in the social VR sector, likely chilled the feet of investors who might have otherwise funded AltspaceVR’s next round of venture capital,” cofounder and executive editor at Road to VR Ben Lang rightly observed shortly after AltspaceVR announced it was shutting down.

Facebook Spaces can’t be understated here. As far as high-fidelity social VR is concerned (as opposed to WebVR), it makes AltspaceVR and its token 35,000 monthly user base immediately redundant. It’s integrated with Facebook Messenger calls and allows for mixed-reality communications, meaning you can broadcast yourself in VR while chatting with friends who aren’t. There’s no competing, or even co-existing, with that.

What’s also telling is that on August 3, the official “last” day of operations when the app was supposed to shut down and offer its users a moment of closure as they celebrated the ambitious social experiment at one final community event, Eric Romo, CEO and cofounder of AltspaceVR tweeted “Hey @AltspaceVR I’m thinking we keep the lights on a little longer. Just in case… Sound ok to you?”, keeping the whole show running indefinitely and without explanation.

It’s also possible that Palmer Luckey jumped in and saved the day in some shape or form, as his tweets might suggest, but that doesn’t make the future any brighter. Money alone isn’t going to help anything when the team, the company, and the product are all at odds with market realities. More cash just delays the inevitable.