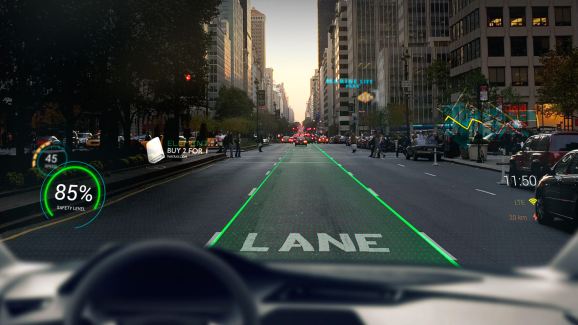 In the next seven years, true augmented reality will likely not become mainstream anywhere, except the automotive industry — and here are the reasons why. By “true” augmented reality” we mean AR that shows virtual objects to be actually integrated with the real environment and visible on various depths, not only on a screen’s surface. Despite explosive growth, AR software and content is now mostly created for small-screen devices like smartphones and tablets. True AR remains out of reach, but cars will reach it first.

All eyes on hardware

For true AR to hit mass market, the industry needs a rich app and content ecosystem and hero device(s) capable of handling it. That hardware is nowhere near ready. Developers rely on the smartphone screen as the main (if not only) means to deliver AR. Wearables are not really an option either, as it’s almost impossible to shove the high rendering performance, convenience, and good quality wide-angled picture into a small form factor. Platforms like Apple’s iOS-centered ARKit only demonstrate the lack of advanced hardware for the true augmented reality.

If smartphones, tablets, and wearables are not ready for true AR, non-wearable gadgets will emerge. What gadget has the most potential to deeply integrating the virtual objects in the surroundings? The answer is automotives: Cars already have enough transparent surface to become a hardware platform for the true AR in the windshield, and the rise of driverless cars will create the demand.

Sooner or later, the global automotive industry will be dominated by MaaS (mobility-as-a-service) companies. Uber, Lyft, Didi, and others are already making money on transportation rather than car sales. With driverless solutions on the way, we predict car manufacturers will continue to lose ground as they are able to offer nothing more than commodity.

The share of vehicle electronics in a car’s value is growing fast. I believe that in the next few years AR will become a key driver of this share getting larger.

How AR can benefit automobiles

Thousands of developers are already committed to deliver rich and immersive AR experiences through the Apple App Store and Google Play. However, many of those applications aren’t applicable in real-life situations, serving as entertainment for its own sake.

In the automotive industry, AR can open unlimited opportunities for location-based content serving specific business purposes, such as:

At WayRay, we already work in that direction by developing AR navigation and visualizing advanced driver assistance systems. The question is — what if the impact of AR in automotive goes beyond new business models?

At the current pace, car manufacturers aim to increase the level of self-driving capabilities by one point every two years. Audi recently introduced the A8 – a model with level 3 driverless capabilities (At level 3, “drivers are still necessary … but are able to completely shift “safety-critical functions” to the vehicle, under certain traffic or environmental conditions), and other car manufacturers have committed to reach that milestone by 2018. With fully driverless cars expected to be available to regular consumers by 2025, AR will be playing an important social role by helping users to adjust to the new reality.

During the transition, people will have to learn to trust driverless cars. A passenger should at any time be aware of what is happening in the car: why it chooses the specific lane, which cars are around, how busy one or another road is, how the route is being calculated. Let’s not forget about the simple curiosity — most passengers will be keen to see how exactly a robot does the job better than a human.

Augmented reality is a natural way to visualize the decision processes in the car so the passenger feels safer and more comfortable. Automotive AR  could use a combiner glass with a holographic film on it, which work as a lens and reflects only certain wavelengths. People will look through the combiner glass in front of the windshield and see the projected video or interactive interface.

Of course, a few challenges will emerge — for example, we’ll have to change one of the essential drivers’ habits to look in the mirrors. And developers still have to prove that AR provides better and more precise experience.

As cars evolve, we’ll see a variety of applications and implementations for augmented reality in the industry. At the same time, AR has a potential to look ahead of the market depending on the availability of the aftermarket devices with over-the-air updates.

In any case, it becomes more and more obvious that the market will soon need a universal platform for any car-related AR content. Eventually, I think, a standard will be created for AR content in transportation. That requires building an AR-led ecosystem for the manufacturers, software developers, content creators, and — maybe most importantly — for drivers and passengers.

To sum up, automotive industry gives the true AR the most opportunities hardware-wise. On the other hand, AR has a potential to support the market in the smooth transition towards driverless transportation. It means that augmented reality in automotive is a trend that will only grow bigger and pave the way for the true AR in other industries.

Vitaly Ponomarev is the founder and CEO of WayRay, an augmented reality auto company.