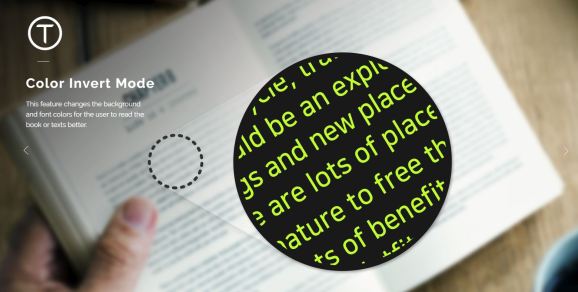 Relúmĭno is a VR app for the Samsung Gear that helps those with vision problems see text and objects better.

The big news of the week is HTC’s decision to lower the price of its Vive virtual reality headset. The device now costs $600, making it $200 cheaper and closer to the Oculus Rift and Touch’s $400 price. Our friends at UploadVR have an editorial on whether you should buy it now.

But you already knew that, I bet. However, did you know that we learned more about how app and device developers are using AR and VR for social good, for making people’s lives better?

Let’s start with Samsung. It’s launched Relúmĭno, an application to help those with visual impairments see more clearly. It works with the Gear VR headset, and it uses a phone’s rear camera to magnify text, images, and other things. It turns the device into a magnifying lens, so to speak. It also helps with those who have tunnel vision. It comes from Samsung’s C-Lab, the company’s in-house incubator, and part of the next step will be making “glasses-like products” to bring this out of the bulky VR headset.

Sounds like AR glasses. Well, someone’s already working on a set to help the hearing impaired enjoy films. The Berlin-based Greta & Starks has apps that whisper and stream the subtitles of films for those who can’t hear well — or at all. And now it’s working on bringing the subtitles to a Google Glass-like device.

Both of these advances may not cure cancer, but for those who have vision problems or are hearing impaired, the benefits could not just improve their lives but serve as key stepping stones to AR and VR taking on significant health problems.

And isn’t the transformative nature of AR and VR why we care about these in the first place?

P.S. Just a reminder that Hover Junkers remains one of the best multiplayer VR games.

The virtual reality (VR) wars are starting to heat up, with HTC announcing earlier today that it is slashing the price of its Vive VR headset from $800 to $600 — a month after Facebook scythed prices for the Oculus Rift headset and Oculus Touch controller. But VR remains very much a niche medium, and we’ve yet […]

Intel is unveiling the first batch of its 8th generation Core processors, which are targeted at laptop users who like to do video editing or run virtual reality apps. The chips should also be plenty good for new kinds of gaming laptops. Santa Clara, Calif.-based Intel said the chips have 40 percent better performance than […]

In preparation for the upcoming holiday season, HTC announced a permanent price reduction for its Vive virtual reality headset. Starting today, it will drop from $800 to $600. The announcement comes a month or so after Facebook slashed the prices for the Oculus Rift headset and Oculus Touch controllers, bundling them for $400. HTC says its […]

Game Insight offers something new for Guns of Boom fans: Watching in AR

EXCLUSIVE: Game Insight has had more than 10 million downloads for Guns of Boom, and now it has figured out a novel way to increase the numbers of people watching multiplayer matches of this mobile first-person shooter. Using Apple’s ARKit, Game Insight created an augmented reality demo that enables someone to view a 3D scene of […]

Immersv has raised $10.5 million to strengthen its position as a provider of advertising for virtual reality and mobile 360-degree apps and games. The new round is a vote of confidence for the VR market and its cousin mobile 360 (where people view 360-degree images on their mobile devices). While some VR companies have run […]

There’s great optimism associated with the promise of VR, and revenues from this industry are expected to reach $13 billion in this year. Despite the optimism, widespread adoption of VR has remained elusive. For real estate, however, the potential of VR is being reality quickly. VR is a newcomer to a real estate industry heavily focused on customer […]

AR/VR Weekly: CCP Games has found one solution to the VR drought (update)

Studios are dealing with the so-called VR drought. And it looks like CCP Games is taking an alternative route to dealing with the doldrums as companies wait for VR to hit critical mass. Take your game beyond VR. The Icelandic company will launch a version of Eve: Valkyrie, its flagship VR starfighter game, that brings it out […]

Editorial: Why You Might Want To Pause Before Buying HTC Vive

This week HTC dropped the price of its Vive PC VR system by $200, bringing it much closer to that of its chief competitor the Oculus Rift. $600 for Vive is precisely the price I called for in a recent editorial, making it competitive with the Rift again. However, the decrease comes absent a critical update to the hardware I’m hoping to see sometime in 2018. (via Upload VR)

Greta & Starks, a start-up based in Berlin, is opening the movie theatre door for everyone — including those with visual or hearing impairments and non-native speakers. Both Greta and Starks are apps that allow people with sight or hearing loss to enjoy films. Greta quietly whispers descriptions and actions in time with the film. And Starks displays captions in a variety of languages. (via VR Scout)

Mozilla has released a new version of its Firefox browser that features WebVR support. The concept of WebVR was first put together in 2014 by a group of Mozilla developers. The idea was to allow web users to explore virtual spaces and make it easier to create VR experiences that work across a range of devices. (via VR 360)

There’s some healthy competition in the VR 3D modelling space, as Sixense brings serious enhancements to MakeVR in a new version of the product named MakeVR Pro, with precision tools to assist in detailed 3D creativity and production. Both versions are currently only available on Viveport, although there are plans to bring the software to other platforms. (via Road to VR)