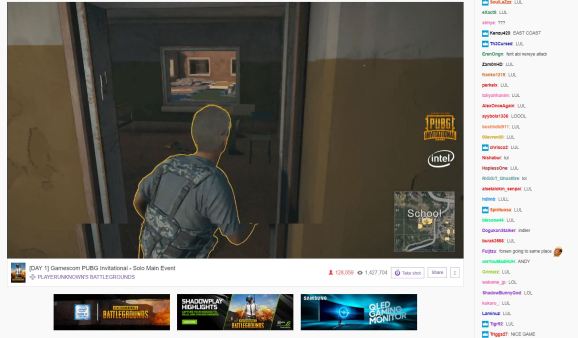 Players laugh at some janky animation during the Gamescom PUBG Invitational.

The first official tournament for PlayerUnknown’s Battlegrounds is underway in Germany starting today, and the event has a viewer count in the millions … if you believe the Chinese livestreaming service PandaTV. While tens of thousands are watching the PUBG Gamescom Invitational on sites like Twitch and Mixer, more than 5 million are watching on PandaTV. I’ve reached out to PandaTV to verify that number, because it’s likely not accurate. Panda.tv has a reputation for inflating its viewership count.

But even if 5 million people weren’t actually watching the megapopular last-person standing shooter in China, it does have tens of thousands of viewers on Twitch. At the end of the first day of the competition, 140,000 people were watching live on the official PlayerUnknown’s Battlegrounds channel alone. Developer Bluehole’s first foray into the Battle Royale-like genre recently surpassed more than 8 million copies sold, but now it is also proving that Battlegrounds fans have a massive appetite for esports content as well.

But while fans are booting up Twitch, Mixer, and other services to watch Battlegrounds, the broadcast themselves reveal that it’s still early when it comes to this particular esports scene. I’ve used the observer tools in Battlegrounds before, and I can confirm that those tools need a lot of work. They are cumbersome, and it’s easy to miss a lot of the action.

For example, the first match featured 71 players, but the broadcast camera missed a vast majority of the action. Of the 70 potential kills that the livestream could have captured, it missed 57 of them.

In an especially unfortunate moment for the broadcast, the production team jumped to the map view during a pivotal moment when only three players were left. While the action was culminating on the ground, players didn’t get to witness the second-to-last kill of the match — instead, they simply saw a player turn into a skull on the map screen.

The broadcast eventually started bringing in replays, but it was just from the same in-game camera instead of showing a kill that viewers didn’t get to see live.

That’s why I hope future broadcasts look more like a professional golf tournament. But Bluehole also clearly needs time to beef up the spectator tools to give its commentating teams an easier time of keeping up with the fire fights.