Ubisoft unveiled The Crew 2 earlier this summer, and now it has unveiled hands-on demos of the gameplay that takes you into the skies, the waters, and the roads of New York city. Ahead of Gamescom, I took The Crew 2 for a spin, and I had some funny times trying to stay on course.

The new open-world driving game has morphed into a place where you can fly and drive your speed boat. The game is coming out in early 2018 for the PlayStation 4, Xbox One, Xbox One X, and Windows.

The Crew 2 comes from Ubisoft’s Ivory Tower studio in Lyon, France, two years after the launch of The Crew. The Motornation lets you drive just about anywhere in the U.S. I tried out a level where I burned rubber in a Porsche 911 in New York City.

You’ll still be able to drive across the country and race friends or strangers in challenges. The Crew generates races with start and finish lines, and it lets you play certain kinds of games like cops and robbers, where one party chases down another.

Ubisoft has made it easy to switch from one type of transporation to another. You simply pull up a menu that gives you choices of three different vehicle types. You hover over one of them, and it instantly switches you from a car to a plane or a boat. Your vehicle appears automatically.

Plush and life-like vegetation, 3D volumetric clouds and fog, and realistic water serves as a backdrop for your motor adventures. It wasn’t so much the realism that I liked. I enjoyed being able to shift so quickly from a car to a boat or a plane instantaneously. I got a rush doing flying over New York city skyscrapers and flying under bridges. 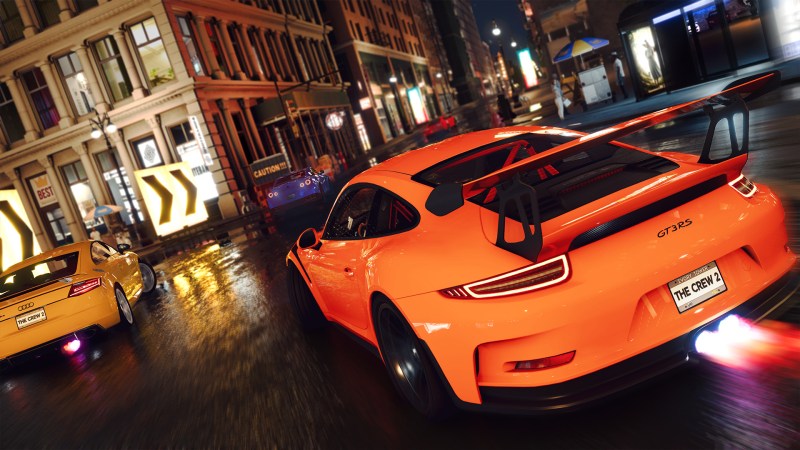 I tried to take a speed boat into the heart of Central Park’s big lakes. I raced my boat under walking bridges and did little jumps on ramps. But I eventually ran out of space to drive the boat. Depending on where you are, of course, you’ll find that it is a lot easier to do either the driving or boating or flying and have a lot of fun.

I hopped into a Formula One racing car for a brief time and then took my car off the track and started racing it through the forest surrounding the race track. That showed that you could take certain kinds of vehicles and do whatever you wanted with them.

I had fun, but I wonder how long users will go before they get bored with wreaking havoc. Hopefully, Ubisoft will figure out quests to make sure that players keep progressing through the tale.