I suck at Cuphead. Let’s get this out of the way. But in my defense, the run-and-gun platformer from Studio MDHR and Microsoft is difficult.

Editor’s note: Please check out our full explanation of this story in our DeanBeat column.

The old-time cartoon style game comes out on September 29 on Windows and the Xbox One, and I got a good preview of the game at the Gamescom event in Cologne, Germany. It turns out that it’s harder than it looks, and that is part of its appeal. While my performance on the captured video below is quite shameful, as I never finished the level, I think it shows quite well why Cuphead is fun and why making hard games that depend on skill is like a lost art.

Maja Moldenhauer, the sole inking artist at Studio MDHR, walked us through a tutorial for Cuphead before letting us loose. It was a bad sign when I took a long time to figure out how to jump off a stone and dash through the air to get over a bigger stone. Moldenhauer said the proper term was “challenging,” not “difficult.” But I quickly put the lie to that terminology.

Go ahead, laugh your heart out at my expense.

Cuphead is a run-and-gun action platformer with hand-drawn art that is inspired by animations from the 1930s. It was inspired by the subversive art of Fleischer Studios, Disney, and others. While Cuphead may remind you of the cup character in Beauty and the Beast, it actually was inspired by a 1936 Japanese propaganda film where a man with a teacup head turns into a tank. 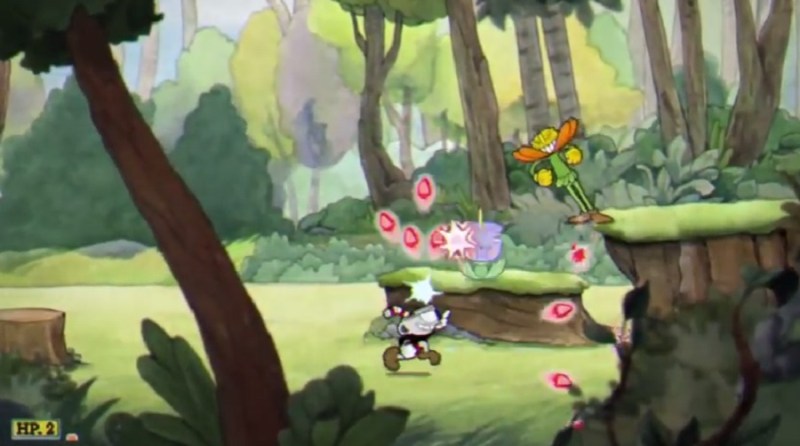 Above: I didn’t get far past this guy in Cuphead.

As I started the new level, I talked to Mac on the bridge and then went into the action in the Forest Follies section. This was supposed to be the first of several sections we could play, but I didn’t make it very far. The story sections of the game were deleted, and I was able to go straight to gameplay. Of course, I expect the final game to have a lot more emphasis on gameplay over story.

I could have played a co-op game with another person, and that would have been a good idea as a newbie. But I went straight into it, even after a PR person told me he couldn’t finish a level.

I didn’t realize for quite a long time that you don’t accomplish anything by jumping on top of an enemy, like in the Mario games. Rather, you lose a life. It took me a  reminder as well that you can change the type of shot.

The red bullets spray in several directions at once, while the blue ones go in a straight line. The blue bullets have a longer range, but the red ones are good for a shotgun-style blast.

There are a variety of ways to die unexpectedly. I died by jumping into a bush instead of jumping to a cliff. I think you’ll all agree that at the very end of the video, it was very unfair that I died by jumping into the forest canopy. I think you’ll agree that life isn’t fair, at least in Cuphead. I’ve played the game for a total of 26 minutes, but I figure it might take 1,000 times that for me to complete this game, if my initial 26 minutes of shame are an indicator.

Updated at 10:00 a.m. on September 5: This story claimed that Cuphead developers originally developed Super Meat Boy. That is not correct, and GamesBeat apologizes for the error.