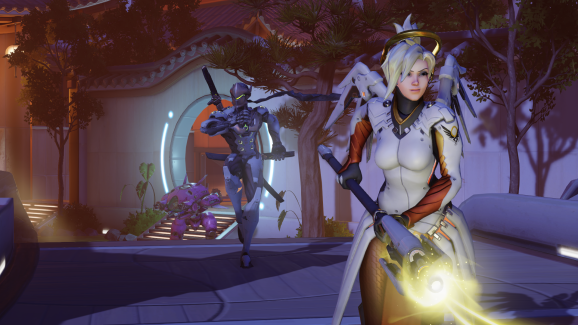 Blizzard announced massive changes to one of Overwatch‘s most popular characters, Mercy. The healer is losing her ability to resurrect all dead allies nearby.

Overwatch director Jeff Kaplan explained the reasoning behind the change in the above developer update. Mercy’s resurrection ability was very powerful, but not all that fun. It encouraged Mercy players to basically hide until they could use it, while it would frustrate the other team since it could undo an impressive play.

But Mercy isn’t going away empty-handed. She’ll still be able resurrect players. Instead of it being her Ultimate ability (which take the longest time to become available), it’ll be a regular ability on a shorter, 30-second cooldown … and it will only resurrect one target at a time.

Mercy’s new ultimate, Valkyrie, powers up her healing and damage while giving her the ability to fly. Mercy has always been able to float toward teammates and slow down her descent toward the ground, but this will be true flying. She’ll also shoot faster, have unlimited ammo, and her healing and damage-boosting beams can chain to multiple allies. Plus, the cooldown on her Resurrection ability drops to 10 seconds.

These changes are live now on Overwatch’s PTR (public test realm). This is where Blizzard tries out changes before making them available in the official game. Blizzard is also introducing announced changes to the tank character D.Va to the PTR, shortening the duration of her Defense Matrix ability (which absorbs enemy projectiles), letting her shoot while boosting, and giving her a new rocket salvo move.

Since these updated characters are on PTR, they’re subject to change.