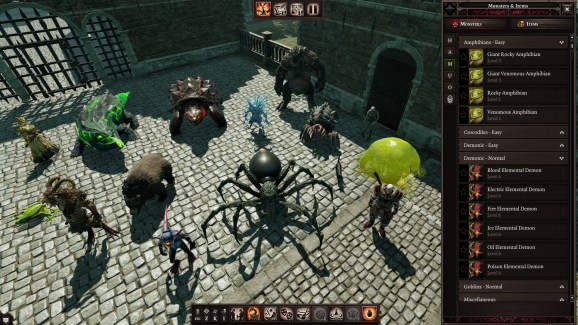 It's a Monster Manual in one screenshot!

I have role-playing games on my mind. This shouldn’t surprise anyone who knows me. In my 10-plus years covering videos games, I’ve been a champion of RPGs, regardless of their origins: Dungeons & Dragons, the story-heavy games from Japan, the systems-based games of North America and Europe, and the throwbacks and classics.

Seems like a lot of you have had RPGs on the brain in 2017, too. The NPD market research firm said last week that sales for games like Nier: Automatica, Pyre, and Torment: Tides of Numenera are up 50 percent year-over-year. This is happening despite the disappointment of Mass Effect: Andromeda, which EA said this week will no longer receive support for its single-player story. Of course, let’s be fair and note that NPD is also including Horizon: Zero Dawn as an RPG, a definition some on Reddit disagree with.

Even so, it’s still good news for my favorite video games. Earlier this summer, I checked out Divinity: Original Sin 2’s game master tools. The designers adapted the D&D starter set adventure, Lost Mines of Phandelver, and the capability of this mode impressed me. I’ve been drafting out how I’m going to turn my favorite old-school D&D module, The Keep on the Borderlands, into a user-created module for Original Sin 2. I’ve tried — with poor results — to do this in Neverwinter Nights 2 and Sword Coast Legends, two D&D-based video games with design tools that are either too hard to use … or aren’t varied enough to properly reproduce this classic dungeon-crawl.

For PC gaming coverage, send news tips to Jeff Grubb and guest post submissions to Rowan Kaiser. Please be sure to visit our PC Gaming Channel. You can also enter our Intel-sponsored contest for an iBuyPower Snowblind gaming rig here.

P.S. You hungry for some PlayerUnknown’s Battlegrounds? Join us for most recent Family Chicken Dinner night.

I’ve spent the last two Friday nights sitting at my computer talking about other people competing in PlayerUnknown’s Battlegrounds. Don’t pity me. I don’t go out on Friday nights anymore, so this is quite exciting by my typical standards. As part of GamesBeat’s PUBG Family Dinners, I have taken on the role of camera person […]

Ethereum leads AMD and Nvidia GPUs to a historic quarter

The Bitcoin-like Ethereum cryptocurrency has jacked up the video card market. AMD and Nvidia GPUs saw a massive spike in shipments (to retailers and OEMs) of 31 percent from the first to the second quarter of the year, according to intelligence firm Jon Peddie Research. This is the first time in 20 years that discrete […]

I played Little Red Lie, and now I am no longer capable of feeling joy. It’s a story-driven game that unflinchingly shines a light on topics of mental illness and economic disparity. The main interaction is lying — to yourself and to everyone around you. It’s bleak and uncompromising, full of people who either make […]

Intel is unveiling the first batch of its 8th generation Core processors, which are targeted at laptop users who like to do video editing or run virtual reality apps. The chips should also be plenty good for new kinds of gaming laptops. Santa Clara, Calif.-based Intel said the chips have 40 percent better performance than […]

John Smedley has had a storied career in games, including the creation of EverQuest, the growth of Sony Online Entertainment, and the spinout of Daybreak Games as an operator of games like the zombie apocalypse online game H1Z1. He even tried a stint as an indie game developer, reliant on Kickstarter funding. But earlier this […]

Role-playing games are having a big year in terms of sales, according to industry-tracking firm The NPD Group. A number of RPGs have launched in 2017 both from Japan as well as the West, and many of those have found success. Compared to same time in 2016, this year’s crop of RPGs have attracted a […]

The shooter audience on PC looks like it is in the middle of a migration from last year’s big hit to this year’s breakout success story. Nearly a quarter of all Overwatch players on PC also played PlayerUnknown’s Battlegrounds last month, according to data from intelligence firm Newzoo. And it’s finding that players are going […]

Teaching players without tutorials in Kingdoms and Castles

Turning a small hamlet into a sprawling city, defended from Viking and dragon attacks by high walls and smart defenses, can be a daunting task for any budding Medieval city planner. Doing so while keeping the populace happy and healthy can be even harder. (via Gamasutra)

You might have heard that the lads-on-tour simulator Final Fantasy XV [official site] is coming to PC next year. But long before that announcement game director Hajime Tabata dreamt of the idea of including mod support in the then ethereal PC version. Well, that’s now a solid plan. “I think one of the biggest things [PC] players can expect is mod support,” he told me via translator at Gamescom. “We definitely want to do it. We haven’t actually managed to get our full modding policy or discussions on that finished but at the moment we do really want to do it. We’ll have the full details around autumn time.” (via Rock Paper Shotgun)

Back in June 2016 we informed you about Halo Custom Edition SPV3; a total overhaul for the first Halo game on the PC. And we are happy to report that the team has been working on this total overhaul for a whole year and released a brand new version of it. SPV3 comes with new weapons, enemies, vehicles, areas to explore and levels, as well as easter eggs and skulls which add new twists onto the gameplay. (via Dark Side of Gaming)

The reference books that line the shelves of developer Ultra Ultra’s modest Copenhagen office offers insight into the aesthetic of its first game, Echo. There’s a book of 19th Century Interior Design and a book of Venetian photography. Prometheus: The Art of the Film and Star Wars provide sci-fi reference points, while Metal Gear Solid, Blame! and Neon Genesis Evangelion—all three of which are represented in some form on the shelf—provide the inspiration for character design. (via Ars Technica UK)