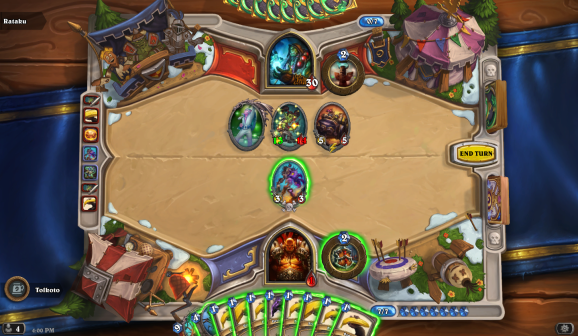 What am I supposed to do with all these Bananas?

Traditional sports may have an esports problem now that many young people are flocking to competitive online games. But it seems esports has a traditional sports problem as well. World Electronic Sports Games (WESG) split its esports tournaments into men’s and women’s divisions, attempting to follow the structure of the Olympic games. On its registration page, it noted that only men could enter the main competition for games like Hearthstone and Counter-Strike: Global Offensive, while women had to compete in their own division for a much smaller prize pool.

It’s now clarified that policy after Blizzard Entertainment reached out to it, but not before causing consternation in the fan base. A tweet from top Hearthstone streamer and caster Alexander “Raven” Baguley called out WESG on August 22: 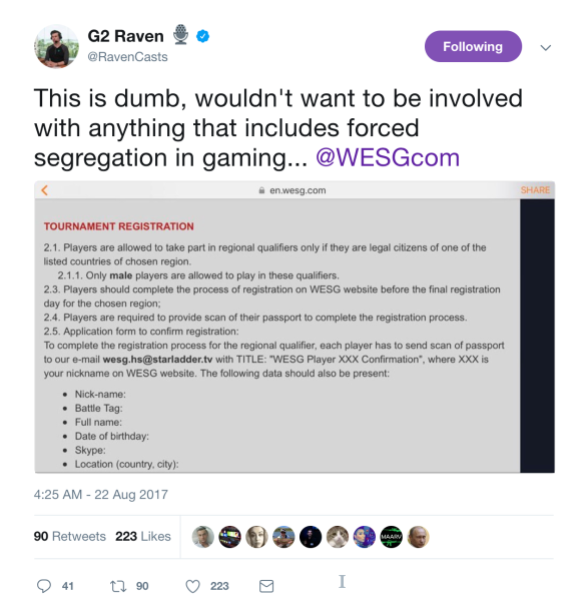 “I think having female-only tournaments are fine, and it generally does help with growing a female competitive player base within the game. It becomes an issue when female players are not allowed to enter the ‘main’ tournament (I use ‘main’ based on prize pool),” said Baguley in an email. “I thought the idea of providing female-player-only tournaments was to get more of them to feel welcome in a competitive setting. The issue arises now that, if this is the plan, where do they go once they deem themselves comfortable enough to play in competition?”

WESG is in its second year and runs tournaments for CS:GO, Dota 2, StarCraft II, and Hearthstone. In a post on its site, WESG notes that both men and women can enter its Starcraft II and Dota 2 competitions. However, CS:GO and Hearthstone have women-only divisions, which will receive a significantly smaller prize pool than the men’s groups. The top CS:GO player in the main tournament will receive $800,000 while the top player in the women’s division tournament will receive $100,000.

Why are prize pools between men and women so different? Why can't women play in main event? pic.twitter.com/GNVEtZUjXk

This isn’t the first time an esports tournament has barred women from entering the main competition. In 2014, the International E-Sports Federation (IESF) received criticism for the same policy. It created a women’s division for Hearthstone, but it wouldn’t allow women and men to compete against each other. After outcry from the fan community as well as outreach from Blizzard Entertainment, IESF modified its policy to include a women’s division alongside an “Open for All” event where anyone could participate.

Blizzard took IESF to task at the time, saying in a statement: “One of our goals with e-sports is to ensure that there’s a vibrant and also inclusive community around our games. We do not allow the use of our games in tournaments that do not support this, and are working with our partners to ensure they share the same goal.”

It seems that WESG is on its radar this time as well. Kim Phan, Blizzard’s esports director, chimed in on Twitter about the gender-segregated divisions:

This is not okay @WESGcom

After Blizzard reached out to WESG, it clarified its men-only policy for its main tournament, saying it was a misunderstanding. “Blizzard Entertainment wants the global community, in our games and at our events, to welcome players from all backgrounds, genders, and ethnicities,” Blizzard said in a statement to GamesBeat. “WESG shares these values, and has addressed the miscommunication to make it clear that women can compete in the general group tournament.”

A statement on the WESG site says that the initial policy was a result of translation issues, and that a number of women Hearthstone players have already qualified for the main tournament finals in its native China.

“Nevertheless, while we announced registration information for European and American regions, due to language issues and miscommunication, our team confused the concept between general group and male group,” says the WESG statement. “Therefore, in the announcement of registration information, general group has been wrongly expressed into male group and caused misunderstanding to overseas users.”