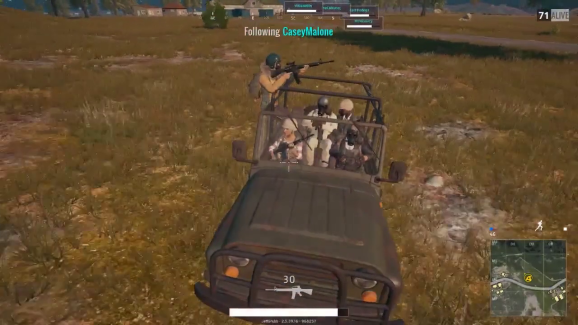 This will end well.

Every Friday night, folks from around the games industry get together for the Family Chicken Dinner Invitational Tournament on Twitch. This is a broadcast of friendly exhibitions in PlayerUnknown’s Battlegrounds, the last-person-standing shooter from developer Bluehole. In the Family Dinner, teams of developers, media personalities, and others — as well as viewers — try to survive and kill their way to a win and a delightful meal packed with protein in a variety of custom matches. We’re playing again tonight, so tune for that, but until the chef rings that dinner bell, bask in the highlights from last week.

I’m still working on archiving each of the matches from last week on YouTube, but we’ve got plenty of quick highlights for you to check out below. Also, check out last week’s highlights right here.

Demiurge developer Casey Malone and documentary director/No Clip founder Danny O’Dwyer nearly pulled out a big win in an early match, but their impressive run came to an end when they ran into the pair of XenXero and TechMF, who are regular viewers and absolute beasts at PUBG. This was at the end of our first 8-person-squads game, and it still came down to just a few players on each team trying to get the last kill in.

No, this is not mature content. But when Battlegrounds breaks, sometimes you just need a moment before you go to the afterworld.

The Battle of Three Armies

During one of our 8-player matches, the team led by Foo Show creator Will Smith and artist Mike Mitchell took a high ground position inside the safety of the circle. With that fortified ground, that team was able to keep a team led by Giant Bomb’s Vinny Carravella and Alex Navarro as well as Waypoint’s Austin Walker pinned down in a grouping of houses at the bottom of a hill. The fighting went on so long, however, that another full squad eventually noticed and started moving in from the south. It was one of the more epic moments during the Family Dinner.

In the frightening early parts of one duo match, the excellently named viewer player Daggett Ronpa tried to hide in a corner to take out a pair that was hunting them. But fellow viewer players Numaroth and D347 knew where he was, and that led to some intense SWAT-like action.

SnakeLinkSonic, who I’ve literally known for more than 20 years from back when we used to hang out in the Nintendo Chat on AOL, lost his team early during one round. But he had already collected a powerful M24 sniper rifle out of a care package along with a silencer. So he decided to lay in the grass near the center of the circle and wait things out, and that strategy paid off in the end.

USGamer’s Mike Williams is a Jedi

Before SnakeLinkSonic picked up the big win, he was occasionally picking people off with his M24. But one person he couldn’t get was USGamer reviews chief Mike Williams. Somehow, right as Snake pulled the trigger on a perfectly aimed headshot, Mike went to pick up something off the ground. That caused his character to duck just as the bullet flew by where his head was only a second earlier.

In another duos match, Deep Silver global community manager Matt Pascual and O’Dwyer teamed up and found a lot of action on the rocky southern cliffs of the military island. In one particular battle, Danny found himself bleeding out right next to another team. But he need not worry because Pascual is a crack shot.

If you’re hungry for more action like this, be sure to tune into our Twitch tonight around 8 p.m. Pacific time. Also check Twitter for the hashtag #PUBGFamilyDinner for anyone else who might be streaming from the event.