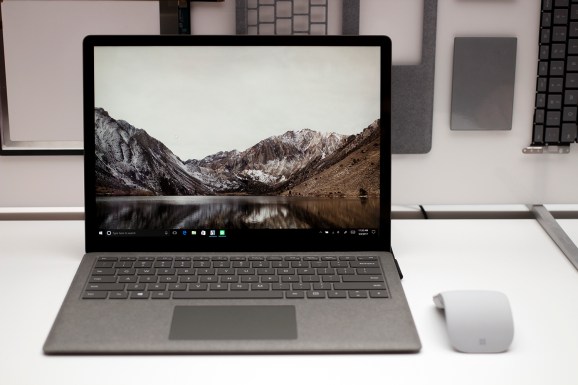 When I was shopping for my last laptop, I made a conscious effort to exclude all models with touchscreens. It was an easy way to narrow down the choices and made sense to me: Any money I could save on opting out of the touchscreen would be better served to beef up any other hardware component, or could just stay in my pocket. I had accepted that touchscreens made sense for smartphones and tablets but were useless in traditional computers.

I’ve been playing around with Microsoft’s Surface Laptop as my main rig for the last few weeks, and I like having the touchscreen there, even if I barely use it.

This hit me like a ton of bricks when I tried swiping a webpage on my old gaming laptop. Before having a touchscreen laptop, I had never made that faux pas. In my world, only the phone had a touchscreen, so that muscle memory simply didn’t exist for me. The fact it managed to develop so quickly after using a Surface Laptop for just a few weeks gave me serious pause.

It also surprised me because I’m not very mobile with my laptops — I primarily use them as desktops. The reason I use a laptop as my main computer is to have the option to take it with me if I need to.

The same thinking extends to touchscreen laptops. My laptop is for work, and that means the main inputs for me are the keyboard and a mouse (I hate trackpads and only use them when I absolutely have to). I own a tablet, but it sits in a drawer that I never open — it’s too much effort to switch devices when my smartphone does everything I might need from a tablet. And yet, if I want to use my laptop for something that isn’t work, a touchscreen can come in handy.

Let me be absolutely crystal clear: Touch should not replace mice and trackpads — and definitely not keyboards.

Depending on what you use your laptop for, you may not access its camera and microphone for days, weeks, or even months. But when you need them, whether it’s that important international video call or a meeting you need to record, the tech is right there.

This is how I now view touchscreens on laptops. They aren’t the default input like on phones and tablets, but they’re pretty damn useful when you need to just reach out and manipulate whatever is in front of you.

And once they do become standard, developers will undoubtedly follow. Apps and games that simply make more sense to touch will become more readily available. None of these are going to replace production software and full-blown PC games, but if you want them, they’ll be an option.