GamesBeat: If you look back on things like Crackdown and APB, were there things you wished for there that you have now?

Jones: We think of cloud as being new, but it’s not really. It’s just started having an effect on gaming infrastructure in the last five years. Going back to APB in 2010, when you made an online game back then, you had to invest in your own dedicated servers. That was really expensive and very hard to manage. You were never quite sure. You had this huge spike at launch, and then, things settled down. The cloud has come along in the last five years and taken a lot of those problems away. If cloud had been around then like it is now — that’s what brought gamers dedicated servers, and gamers understand the value of that. It’s hard to launch a game now that isn’t on dedicated servers. Even if they’re cloud dedicated, it’s a huge advantage.

Behind the scenes, then, this has been happening, anyway. Cloud has been affecting gaming in a positive way. We’re just seeing newer and more unique ways to do that. Our goal is to find more ways to leverage the awesome compute capability that’s out there and start to make it more accessible to developers. It is a different skill set, a skill set they don’t have. There’s a lot of hard work to do in making the cloud accessible for compute. We want to make it very easy and very cost effective to get developers using these kinds of services. 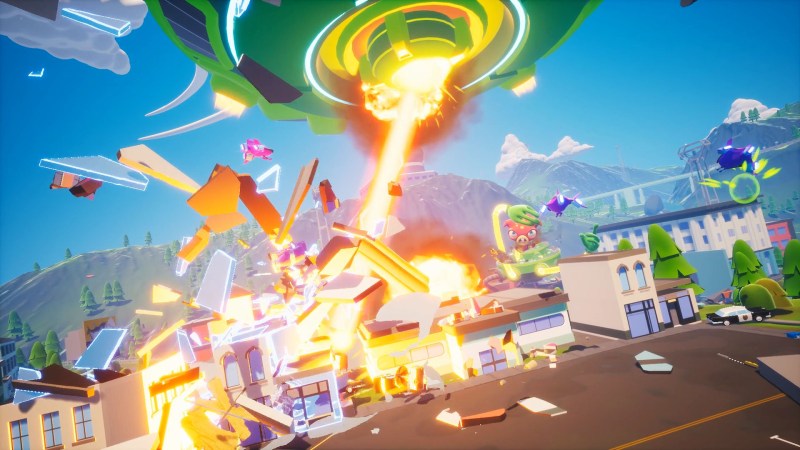 Above: They Came From Space has as many as 10 players in the same space.

GamesBeat: Are there ways this is either similar to or different from things like Improbable — or the folks who started the MaxPlay game engine?

Jones: There’s a couple of key differences. Both of those are good examples of — if you’re going to jump in there, it’s a whole paradigm shift in how you develop. Improbable is built on more traditional web-based technologies. Game developers, we’re all about performance. When we looked at how you build a massive-scale simulation run in the cloud, we started with the hardest problem for us, which is physics. In the physics of games like Crackdown and They Came From Space, we’re dealing with upwards of 50,000 dynamic objects in every frame, and they have to move around in real time, from server to server. Players can’t notice any kind of latency in that experience.

We tackled it from … players have to be able to see the difference. When Crackdown showed up a few years ago, people said, “Wow.” With VR running at 90 frames per second, when we wanted to create a dynamic world for that, we said, “Consumers have to be able to see and feel the difference in the things we’re doing.” That required solving the hardest problems first. From there, going up the stack, things like a traditional MMO backend are very easy for us to do. We tackled it from the low level, and we’re moving further into the market.

GamesBeat: What are some of your plans for this game? Do you want to release it as a demo or actually get it out into the market commercially?

Jones: Certainly the demo. We plan to launch a variation of this, so people can play it and get a feel for what these kinds of worlds are like. We’re using this release to start to gauge reaction as well. We think there’s enough interest that we can find some partners out there and bring some other things to market. But these kinds of game jams or shorts, demonstrating new bits of tech, we’re going to keep on doing that. We’ll always be looking creatively at what can be some unique, inspirational ideas for ourselves, as well as developers and publishers, that we can put together to demonstrate the possibilities. If we get some interest in some of those — if people say, “Oh, I’d love to see this as a full game,” then we’re more than happy to talk to the people who can make that happen.

GamesBeat: Where do you want this to go as far as other kinds of things that could be accomplished with the engine?

Jones: That comes down to personal preference, I think. I’m really interested in how people can apply this as we go away from big physics demonstrations. There’s a lot of work on AI just now, and one of the things we allow access to is GPUs in the cloud from a compute perspective. A lot of companies are working with that because it gives you something like 3,000-plus cores to do tremendous AI. It’s about developers realizing that we need to start thinking a bit outside the box. If we have access to that level of AI for a game, how can we leverage that? AI has a huge opportunity as far as running in the cloud.

I’ve always been a big fan of open worlds, but like I said, we’re in the very early days still. I know people like to think open world games are quite advanced, but I don’t really believe they are. The worlds are still pretty static. It’s hard to find an evolving open world game. I’d like to see us taking a [crack at] some initial versions of technology that can show that everything, the whole simulation is in the cloud 24/7, and we can start to give the player a world that evolves in some ways. I think there are huge possibilities there.

GamesBeat: Are you seeing any success at getting third parties interested in the engine?

Jones: Definitely. We hope to be announcing some other users of the technology shortly. But we’re definitely getting a fair bit of interest now. We’ve mostly been doing this as bespoke services up until now — in the background. We were working on building a platform, so we can start to roll this out to many more developers without it having to be more like a bespoke project. Part of our big drive now is turning this into a platform and getting it out into developers’ hands everywhere, where they can try it with very little friction and start to use it as part of their pipeline. We can see what they come up with creatively. 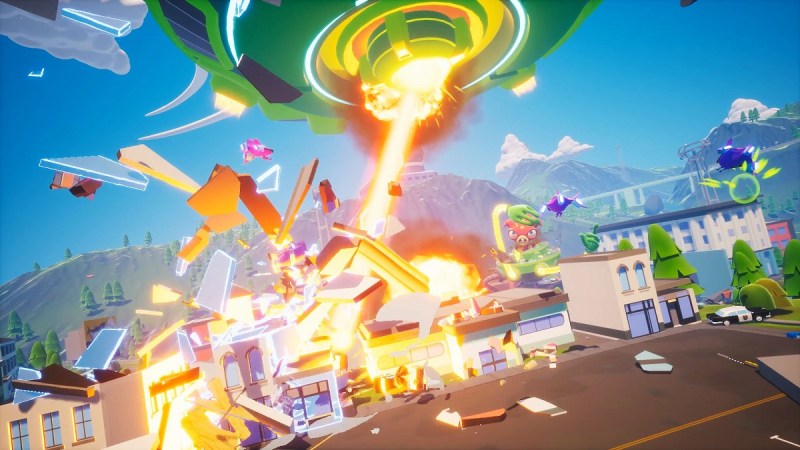 Above: Cloudgine made a game to showcase its engine.

GamesBeat: How many people are at your company now? Have you raised any money so far?

GamesBeat: Crackdown 3 should be an interesting test.

Jones: Yeah, we’re very excited to see that launching. It’ll be quite a big stress test for the technology.

GamesBeat: Are you having as much fun now as you did in the early days? You’ve been at this a very long time.

Jones: I am. I’m really enjoying this, to be honest — this kind of game jam we’re doing with the technology. I always loved thinking about technology in gaming. Any game that brings a bit of unique tech is always something that helps. With this kind of tech, it opens up some new creative ideas, which I love as well. Some of the stuff we’re going to see in the coming months [or] years from the smaller, more creative projects is going to be a lot of fun to work on and, hopefully, spark a lot of interest.

GamesBeat: You could revisit some of the ambitions in games like Grand Theft Auto.

Jones: Absolutely. I still get frustrated by the technology barriers we face and how far we’d like to push these worlds we build. It’ll be exciting to potentially lift some of those barriers. But we have a long way to go.