The new headset is part of Microsoft’s push to support mixed reality technology on the PC, and the company’s goal is to bring VR to more consumers and enterprises. Dell plans to sell the headset for $350 and the hand controllers for $100. All told, a full PC system with the Visor could bring down the cost of PC VR to about $1,000, compared to about $2,000 in 2016. Dell is showing the device at the upcoming IFA show in Berlin.

Dell has some unique controllers. They have lights that help the headset detect the positions of your hands. And the controllers have a visor that you can flip up, enabling you to see the world. When you flip it down, you can immerse yourself in VR.

As a Windows Mixed Reality device, the Dell headset uses some of the same technology that Microsoft has in its HoloLens augmented reality device. That means it has inside-out tracking cameras on the headset itself, rather than external sensors that have to be set up in the room (as is the case with the HTC Vive and Oculus Rift VR headsets). 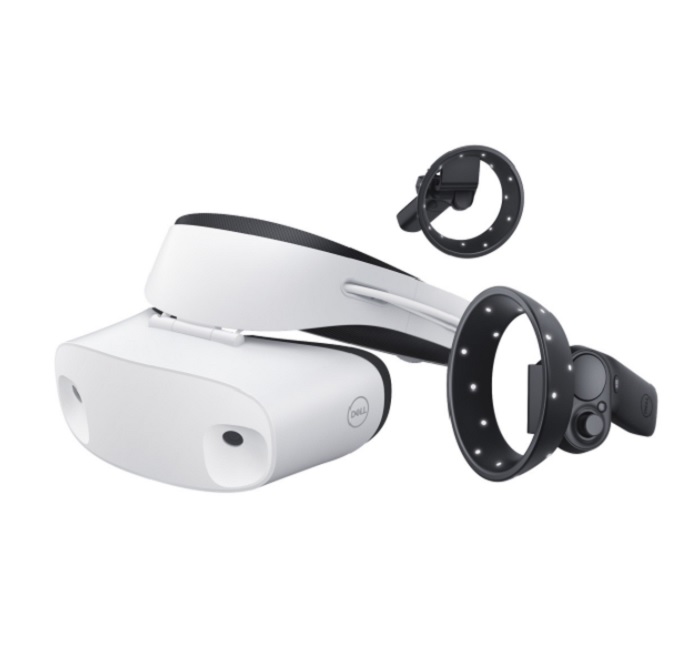 Above: Dell Visor and its hand controllers.

The headset has 1440 x 1440 liquid crystal displays, with a 360-degree panorama experience. It is definitely lighter than a PSVR, but I didn’t hear its exact weight from Dell.

The Visor sits comfortably on your head because it has well-designed cushions. It also has a small rubber flap that fits over your nose. That flap keeps the headset from irritating your nose, and it also keeps light from getting in. There is a small opening both at the bottom and the top of the headset that allows air to flow through so that you don’t have sweat or fog building inside. The ventilation is unique compared to other headsets on the market.

You can adjust the headset strap with a thumbwheel. A cable management clip routes the cables to the back of the headband, giving you a little better freedom of movement.