Indie studio Humble Grove’s enigmatic debut is a point-and-click game with a simple name: 29. Its dreamy atmosphere and low-polygon aesthetic recalls the desolate beauty of indie hits like Kentucky Route Zero, and every line of dialogue seems to carry a second meaning. It’ll launch on Steam and itch.io on November 29, and it’s free.

29 is the first chapter in a series called No Longer Home. Though this is Humble Grove’s first full game, the studio previously made a short prequel for a game jam, Friary Road. I’d played that one before, and the 29 demo is similar in how it’s loosely autobiographical and draped in magic realism.

The demo is a small snippet that starts with five friends in a living room floating in space. As they begin playing a choose-your-own-adventure text parser game on the TV, the walls drop away and their world is replaced by the game they’re playing.

I could select what I wanted to happen using multiple choice, accompanied by some offscreen banter from the characters. The story that unfolded felt like a metaphor: The hero of the game wanders through a forest, finding lost and mysterious objects in their search for a place to stay. Through some of the dialogue, I learned more about Bo and Ao, the two main characters that act as stand-ins for Humble Grove’s two lead developers, Cel Davison and Hana Lee. 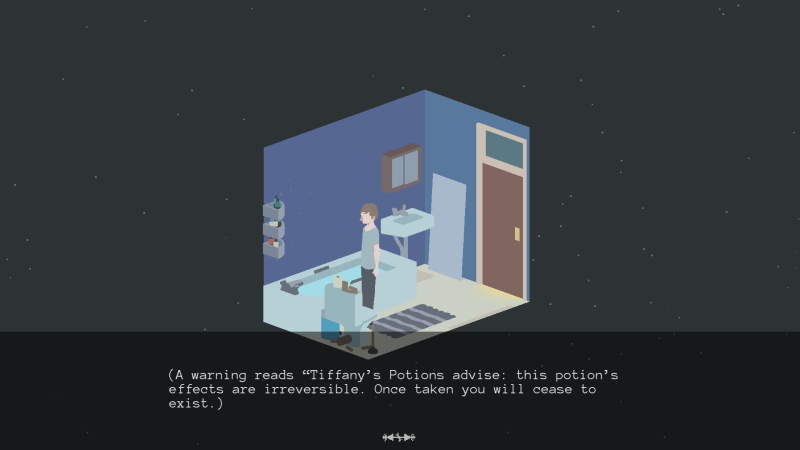 “It can be a struggle to communicate when something in the game is actually happening within the world or whether we’re presenting what’s going on inside the character’s heads,” said Davison in an email to GamesBeat. “Although I feel like often there’s a lot of fun in blurring that line. Approaching the narrative with magical realism has allowed us to write about certain feelings much more freely.”

The demo didn’t feature any puzzle-solving. The landscape drifted in and out as I explored, and words appeared on the screen to a gauzy minimalist soundtrack. The general atmosphere recalled the kind of conversation you might have right before falling asleep: meditative, introspective, and sometimes a little too abstract to have certain meaning.

“It was something we were just doing for fun really, but gradually it grew into something more complex; we were writing these inner-monologues for characters that were based on ourselves,” said Davison. “We had a lot to say about the growing we’d done over the past few years. We felt incredibly lost in terms of where our lives were going next.”

Davison and Lee met while studying illustration at Camberwell College of Arts in London, and they started working on the No Longer Home series after graduation. It started as a chronicle of the apartment they’d shared while in school and grew from there.

“There’s always the worry of it slipping into a vanity project, which I think we’ve been very careful to avoid,” said Davison. “More than anything else it’s been a challenge trying minimalize people misgendering the characters, and by proxy, us. As we are both non-binary [gender that is not exclusively male or female], so are the characters (Bo and Ao); both of them use they/them pronouns and they’re always referred to this way within the game.”

As the game progresses, players learn more about the characters through branching dialogue and by examining Bo and Ao’s apartment. Davison says though it can be classified as a point-and-click game, the main mechanic is rotating the environments and inspecting them from various perspectives. They call out Gone Home, Nina Freeman‘s vignettes, and Kentucky Route Zero as sources of inspiration, particularly the way the latter uses space.

“When designing the environments we consider it as a stage, for the player and other characters to use. Another part of that is building sets with moving parts in mind,” said Davison. “One of the things I enjoy most about film and theatre is how space is used to express what might be going on in the characters’ thoughts.”