Gram Games has generated more than 165 million downloads for its mobile catalog, and the company is launching its sixth puzzle game today, Merge Town.

The new iOS puzzle game (which the company spells Merge Town!) is the latest in the Merge series, which uses the mechanic of merging two puzzle pieces together to solve a puzzle. That’s a mechanic that makes these free-to-play games easy to play. I’ve played most of Gram’s games, and they’re always quite addictive.

The free-to-play game follows the release of Merge Dragons, which debuted in July and generated $1 million in revenues and two million downloads in its first month. Gram Games started out in Turkey, and it still has about half of its employees in Istanbul. The company also has a team of about 30 people in London, according to Gram Games cofounder Kaan Karamanci.

“With this proof of concept, we are now building a fresh, new franchise, based on our merge mechanic,” said Karamanci, in an email. “This is our third game of 2017. We expect to launch 2 more games in the Merge! franchise by the end of the year.” 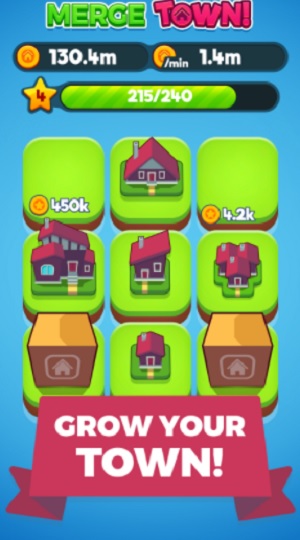 With a full team of 60, Gram Games is able to create more apps than it could in the past.

In Merge Town!, players get a plot of land, and they must develop it into a town. In order to build houses, players must tap on the build box at the bottom of the screen until a building appears on the board. Homes of all varieties are on sale in the app store using in-game currency, which is earned from houses already built on the land.

Once multiple houses are on the board, you merge with others of the same variety to form larger, more impressive homes. It’s kind of like upgrading houses on a property into a hotel in Monopoly.

The bigger the home, the more in-game currency players will earn. And the more a town develops, the more land it will unlock, granting players the space to build more houses. From level eight, players are able to unlock and expand into new towns.

Gram Games is a venture-backed global mobile entertainment studio and the developer of the hit games 1010, Merged, Merge Dragons, Six, and Bounzy!. Karamanci cofounded it with Mehmet Ecevit in 2012. Its headquarters is in London, with a studio in Istanbul.