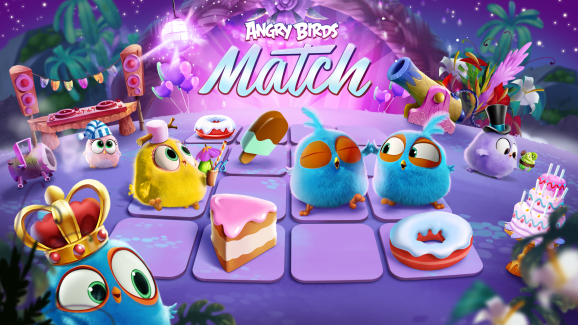 Collectibles and timed challenges are two of the most addictive things in mobile gaming. Rovio Entertainment’s Angry Birds Match wants to tempt you with both, and it’s out now on iOS and Android.

Angry Birds Match doesn’t innovate, but it does do the match-3 gameplay well. The first few levels introduce boosts (like red birds that you can launch vertically or horizontally) and different obstacles on the board (like “glue” that you have to match to dispel). Of course, green pigs hassle you as you try to meet objectives, such as clearing all the mud patches in a level.

As you beat levels, you unlock and collect little hatchlings — baby birds that are new characters from the movie. These hatchlings don’t do much. They’re just cute. When you find a new hatchling, it gifts you with a key that lets you open a treasure chest, which often contains power-ups, gems (which you use to purchase boosts), and extra moves on the next level. Altogether, there are eight “worlds” at launch, such as a beach and a club, with appropriately themed hatchlings in each area to collect.

Every so often, a timed event occurs that challenges you to complete a certain set of goals (such as beat 15 special levels) to unlock a Royal Chest. These prizes, unlike basic chests and premium chests, can only be earned by beating the event.

All of this is pretty intuitive, but there are also odd decisions. For instance, you have to match donuts and popsicles on some levels, which seems a little too Candy Crush and out of place. You also can’t replay levels, which is a little disappointing. The collectible aspect also seems to be half-baked, since the hatchlings don’t actually do anything. You can buy or earn different outfits for them, but these outfits are only marginally different.

Rovio’s been having a good year. It reported that its Q2 revenues grew 94 percent to $101.2 million, due to the Angry Birds movie as well as its library of games — which aren’t all just avian spin-offs. Earlier this year, it launched Battle Bay, a 5-versus-5 multiplayer mobile title with nary a bird in sight. But it’s only been a year since Angry Birds hit box offices, and there’s a sequel on the way in 2019, so Rovio is still viewing the franchise as its main moneymaker.

It does seem a little late in the game for Rovio to be attempting a match-3 game, but overall, it’s a pretty polished presentation. It just isn’t anything new.