Annapurna Interactive has emerged as a game publisher that is willing to take risks on indie titles, and today it is announcing that it will publish Keita Takahashi’s next game, Wattam, on consoles and PC in 2018.

Takahashi, who works at San Francisco indie game studio Funomena, is best known as the creator of the wacky and wildly creative Katamari Damacy, where you roll around a big ball and try to pick up things that will stick to it. Namco first published the game in 2004, and it won numerous awards and spawned eight sequels. It was so zany that the game was included in an exhibit at the New York Museum of Modern Art. Wattam will be shown at the PAX West fan show in Seattle this week.

Wattam is the kind of game that you would expect from Takahashi (no relation to me), who went on to create titles like We Love Katamari, Noby Noby Boy, and Glitch. He started working on Wattam with Funomena — started in 2013 by Robin Hunicke and Martin Middleton — a few years ago. I played a demo of the game around then, and it was full of crazy, cute creatures, like walking cubes and crowns with arms. You had to connect a bunch of these creatures in a circle.

Takahashi told GamesBeat that the name Wattam was inspired by a combination of the Indian and Japanese words for circle. 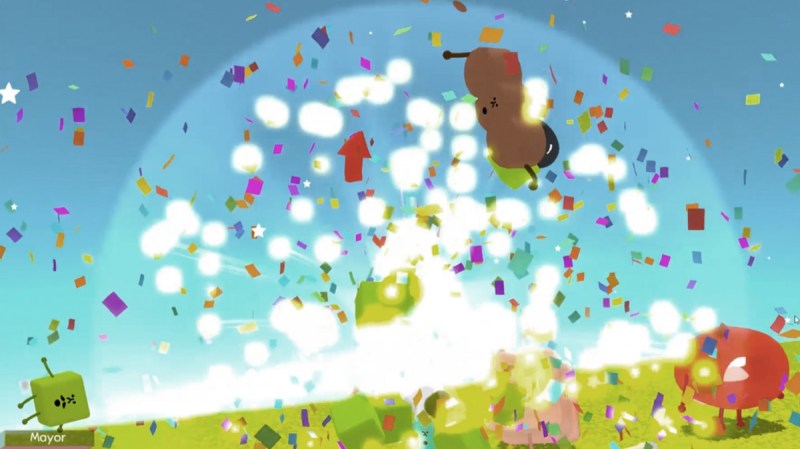 Above: Wattam has huge fireworks every now and then.

Takahashi acknowledged that the development of the game has been challenging. At first, Funomena had a deal to publish the game through Sony. But Sony’s Santa Monica Studio canceled the game, and Funomena had to seek more funding.

Meanwhile, Annapurna Pictures, a movie production company run by Megan Ellison (daughter of Oracle founder Larry Ellison), made its move into games. In December 2016, it announced Annapurna Interactive and showed a few interesting titles at the Electronic Entertainment Expo (E3), the big game trade show held every year in June. The titles, including Gorogoa and Donut County, were all from small indie teams. It also recently published the haunting What Remains of Edith Finch.

The producers at Sony who liked what they saw of Wattam moved over to Annapurna, and they gladly picked up the game after it was canceled, said Jeb Alvarado, the producer at Funomena, in an interview. 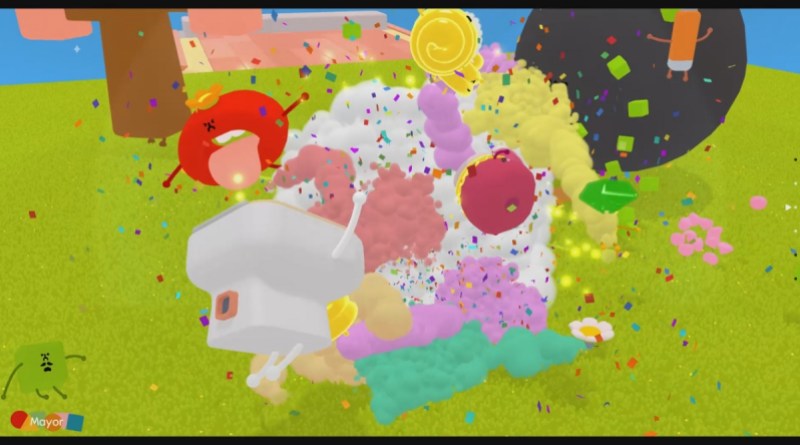 Above: Wattam was canceled by Sony and picked up by Annapurna Interactive.

Takahashi said, “It’s been a good experience working with Annapurna.” As for the game, “I can’t describe it. I have never done an interview before publishing a game. I’m in the zone, very focused on making the game. It is really hard to describe it. It is very personal. A lot of creativity is unleashed by the players.”

I asked Takahashi to compare the game to Katamari Damacy. He said, “Hmmm. It’s hard to compare. We are using physics a lot.”

A team of about six or seven people is working on the title. It is taking longer because the team had to start over from scratch after it got the new funding from Annapurna Interactive.

“We remade a lot of the systems in the past year,” Alvarado said. “It was rough process after the cancellation.”