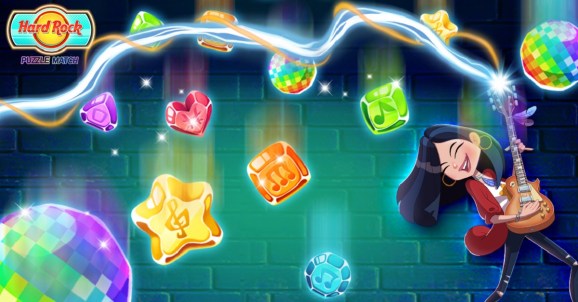 The Hard Rock has its own mobile game.

It is one more brand moving into mobile games, which has become a $46 billion industry. But the entertainment chain believes it can succeed through its differentiator: music. In doing so, it’s joining brands like Red Bull and NBCUniversal, which are making their own games.

“Hard Rock International is continuously searching for opportunities to increase brand affiliation among its loyal fans,” he said. “This highly engaging game will provide users a one-of-a-kind experience, just like they’d receive by stepping foot onto any Hard Rock property, whether it be a hotel, casino, café, or Hard Rock Live venue.”

Above: This mobile puzzle-match game will carry the Hard Rock name.

Hard Rock Puzzle Match challenges players to work their way through levels and puzzles in order to complete their Hard Rock memorabilia collections while also exploring famous Hard Rock landmarks and locations from London to Las Vegas, New Delhi, and Barcelona. Each city has a special set of cards that need to be completed, offering players the opportunity to learn about each location in the process.

Hard Rock tapped Israel-based Ilyon to capture the spirit of the brand and translate it into something people could interact with on a daily basis. Hard Rock operates hundreds of cafés, hotels, and casinos across the world that are visited by more than 79 million guests each year. Each of the brand’s locations features rock memorabilia from Hard Rock’s extensive collection, which is the largest of its kind in the world.

“While we have developed and launched many different types of games, this collaboration and game development process was a truly special opportunity for our team,” said Yonatan Erez, the CEO of Ilyon, in a statement. “We worked incredibly hard to bring everything that is unique about Hard Rock to the small screen, and we are excited to deliver what we believe is simply an amazing gaming experience to Hard Rock’s loyal fans across the globe.”

Above: Ilyon Dynamics has made Hard Rock Puzzle Match for the entertainment chain’s fans.

Ilyon Dynamics has made more than 50 free-to-play casual mobile games with hundreds of millions of downloads. The company was founded in 2013 by four tech entrepreneurs.

“Hard Rock appeals to a wide audience through it’s differentiator — music,” Spajic said. “By targeting the brand’s millions of loyal fans from around the world, we hope to create a bridge between the online and offline experiences. As a leading entertainment and leisure company, Hard Rock is known for delivering guests a one-of-a-kind, immersive experience as soon as they enter a Hard Rock location, and this game captures that experience and puts it in the palm of players’ hands.”