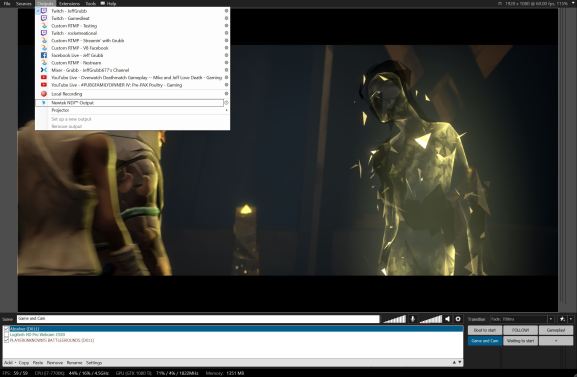 Setting up an NDI feed to send to another computer.

The audience on the livestreaming site Twitch have countless content creators to choose from these days, and that has created an arms race between channels all trying to boost their production quality to capture more viewers than anyone else. Now, video software firm NewTek is targeting those livestreamers with its NDI technology. That’s a new video signal that broadcasts from one computer to another over a local network.

NDI is something that Twitch already uses for its own in-house productions. It enables that company’s on-screen personalities to play games in one room while the producers edit the live feed in another room without having to run any extra cables beyond the existing Cat6 Ethernet in the walls.

“Before we got the Newtek hardware, we were running SDI cables through the ceilings and over the walls in order to just get video feeds from the computer gaming room we had down the hall,” Twitch video production manager Adam Contini told GamesBeat. “Now that we no longer need all that stuff, we’re just plugging those computers into the network using the Ethernet jacks in the wall. Our control room is on that same network. We get the signal feeds without running additional cabling anymore.”

For people like Contini, NewTek has established itself as the go-to vendor for television-quality broadcasting equipment. It hasn’t, however, made the same inroads with consumers or prosumers who are using tools like XSplit or OBS Studio to send their live feeds to Twitch, YouTube, or Mixer. But the company sees an opportunity to do exactly that.

“What this allows for is an evolution of storytelling,” NewTek NDI strategy boss Will Waters told GamesBeat. “We’ve been talking about gaming here. One of the things about this method is that you don’t want to impact gameplay. The gamer doesn’t want the frustration of having to deal with his or her environment to deliver that out, to be able to tell their story through video. What NDI does is it allows for an evolution that extends the storytelling, and in many ways increases the connection with the community. We’re all communicating through video.

“Obviously, Newtek, we’re a manufacturer and vendor of products. We see a big opportunity to be able to service people within that market space. But it’s more than just a transport mechanism. As we look at the way people consume media, they’re looking for quality as far as how that video content is received.”

Waters is likely onto something with the emphasis on quality. One trend that suggests more broadcasters are concerned about quality is the prevalence of two-computer streaming setups even for small channels. With two PCs, a game can run on one rig, and all of the broadcasting and streaming tools can run on the other. This ensures that OBS and XSplit, which are sometimes hungry for CPU and GPU bandwidth, don’t interfere with the quality of the game.

“The last thing you want to do is impact the game itself,” said Waters. “You can start out with a single PC, but you’re competing for resources. Usually the next step from that is to then buy another rig or maybe use a laptop. You have a separate machine that handles the streaming aspect and runs XSplit to send out. To get your video out of the main gaming machine and into that machine running XSplit, that’s where you end up running into using some type of capture card, some type of device, and you’re changing that video format. That’s where you get into these frustrations sometimes.”

Those capture cards include something like the Elgato HD60 S or the Razer Ripsaw. Those work well, but they do create complications. For one, they require cables to run from one computer to the other. That also means that the streaming rig can only get so far away from your microphone and gaming rig, which could mean a lot more background noise and tangled wires.

“And oftentimes consumer hardware, especially gaming hardware, will start to do things that don’t conform to standard video standards,” said Contini. “If you have to use conventional video conversion hardware, if you’re a streamer, in order to convert to get a console or a PC into your streaming PC, then converting from those standards can become more difficult than you need it to be. You might have to change what kind of input you’re using, what kind of input device you’re using. You might have to consider getting some kind of standards converter, something like that, and all of that is just to get it into XSplit.”

For Newtek, this is where it wants NDI to come in and help.

“With NDI, it still remains just an Ethernet cable,” said Contini. “If they’re both on the network, the conversion to your stream resolution and framerate just happens in XSplit or OBS. It’s all you need. You don’t have to start worrying about, ‘is my HDMI input card capable of accepting this 1440p 144 signal that I’m sending out from my 3D card?'”

“NDI allows video to use the network with IP, since that’s the native way that all this software talks to each other anyway,” said Waters. “Using that methodology to be able to then transport a high quality video along with audio signal into the application that then encodes it for delivery out to a platform such as Twitch.”

Setting up NDI is simple. On the source computer where you’re playing the game, you just need to install NewTek’s NDI Tools. That comes with a suite of apps including NDI Stream Converter. Opening that will add a new icon to your toolbar in Windows, and it will also begin creating a constant video feed of your desktop or any window you select over your network.

On the streaming rig, all you need to do is to open XSplit or OBS and make sure you’re on the same network as the gaming PC. Open a new source and select NDI.

This setup gives broadcasters the benefits of a two-PC setup without sharing the same room or a complicated cable rigging. I’ve tried it, and I’m surprised at how well it works. I even tried it with one of my PCs on Wi-Fi. NewTek doesn’t explicitly recommend this, but it seemed like my wireless-AC connection was robust enough to handle the signal. But I would have to do more testing before I’d recommend that.

But I do want to incorporate NDI into my livestreaming workflow, and I think this is something a lot of people will want ot take advantage of. That’s exactly what NewTek is going for.

“The real opportunity is in how people use that and how the disruption,” said Waters. “And that really comes in the way that people adopt and can take advantage and evolve their particular space, as opposed to being locked into particular silos of technology for the sake of being in a particular ecosystem.”